My wife and I recently moved from a very large single-family home to a loft in a downtown condo. This is called “downsizing,” but the term is relative -- the folks who bought our place in Texas were downsizing as well. They also wanted to buy our house’s entire contents, and we agreed -- so I lost my well-loved audio/video system. That meant that, in our new place, I’ve had to assemble two entirely new systems: one for the entire house, another for my office. In doing so, I’ve tried to accomplish a few goals. 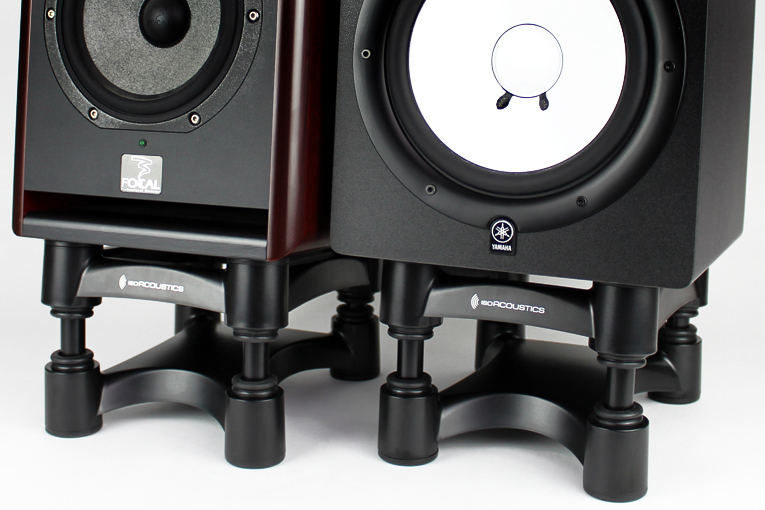 First and foremost is clarity of sound. I worked for years to finally assemble a combination of components ideally matched to produce the sound I wanted. Second, I don’t feel transported by music unless I can imagine the players, in a room, making their magic -- the accurate rendering of recorded soundstages is vital. Third, my systems have to be able to play loud. I usually listen at moderate levels, but occasionally I crank it up, and any system of mine has to be able to take that kind of pressure. Fourth, I want to save my neighbors from being forced to listen to Porcupine Tree at 100dB, so I welcome any decoupling from the room. Also, I’m biased toward smaller speakers, and to listening to them in the nearfield. In dialing in such a system, the greatest challenge is to find a way to get the speakers at the right height relative to the listener’s ears. Good stands are required.

Perhaps you’ve seen IsoAcoustics’ ads for their component stands. You can use them to support speakers, amplifiers, and all sorts of electronic products. This Canadian company says that their stands can significantly improve the sound of speakers -- often, their claims sound like voodoo. And these days, with so many people using small speakers on their desks or in project studios, the folks at IsoAcoustics have sniffed a new market. I’d followed IsoAcoustics for years, always toying with the idea of trying some of their stands, but skepticism had always won out. Could speaker stands really make that much of a difference? And IsoAcoustics’ stands are so light, I found it hard to believe they could even support the weight of the speakers.

After all, for years we’ve been taught to put so much mass under a speaker that the pistonic power of its drivers don’t have a chance of budging the stand-speaker combination by so much as a micrometer. Anyone who’s seen a little subwoofer dance across the floor with each bass note can understand the importance of preventing any speaker movement whatsoever. So, for years, audiophiles have tried to maximize the mass of speaker stands, to the point where you’d need a forklift to move them across the room. One of the reasons for my skepticism is the fact that high-mass stands tend to have similar sounds.

Then along comes IsoAcoustics to tell us we’d be better off if the speaker were completely decoupled from the surface it sits on and allowed to float on its front-to-back axis. They claim that such decoupling allows us to hear the speaker as it was designed to be heard, because their system pushes the energy into the listening room, rather than some of it being transferred to a high-mass stand/shelf/desk and thus lost. 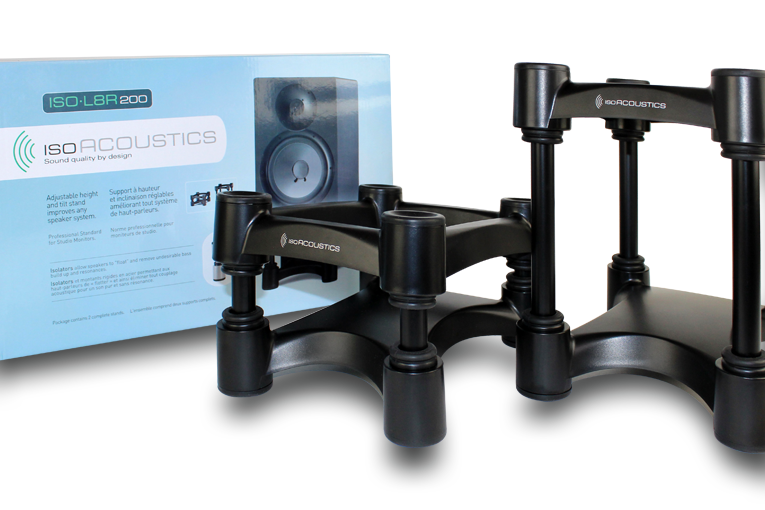 But then I learned something that clinched my interest. Dynaudio, one of the world’s most renowned speaker makers, announced that all of its nearfield monitors would now be shipped with a pair of IsoAcoustics stands -- about as good an endorsement as you’ll find.

Turns out the folks at IsoAcoustics aren’t interested only in the support of a speaker. They’re after nothing less than perfecting the way a speaker and its environment interact. They claim that by addressing three different criteria, they have made possible a dramatic improvement in sound quality. They call this the PIF principle. PIF stands for Placement, Isolation, and Focus: Placement is a stand’s ability to raise a speaker above the supporting surface. Isolation is the stand’s ability to decouple the speaker from that surface. Focus refers to being able to raise or tilt the speaker so that its acoustic center is aimed directly at the listener’s ears.

I spoke at length with Dave Morrison, the man who came up with the IsoAcoustics stand. For years, Morrison helped design and implement the radio and TV studios of the Canadian Broadcasting Corporation (CBC). After setting up so many studios, he developed specific ideas about how to get accurate sound to the audio engineers, and became convinced that using these stands would do more to improve the sound of the monitor speakers used in the studios than any other trick they could devise.

The ace up Morrison’s sleeve was his awareness of what services the National Research Council (NRC), in Ottawa, Canada, could provide. Once his concept was fully developed, Morrison was able to take his prototypes to the NRC to quantify how they work to attenuate vibrations, and how they could be tuned and optimized. Patents were later filed and issued for his design.

To prove his point, Morrison has made some videos in which, using the same speaker and microphone, he does an immediate A/B comparison of the sound, with and without one of his stands, that you can hear for yourself. I have to admit to still being skeptical, despite the fact that, in each case, there was a significant improvement in sound. You can check out the videos on the IsoAcoustics website.

The IsoAcoustics website includes a helpful tool: You plug in the model name of your speakers and it tells you which of their stands will work best. My speakers are Focal’s Solo6 Be model. I entered their name, and IsoAcoustics’ search engine provided the Focal’s dimensions and weight and recommended the ISO-L8R200 stand used in its normal, vertical orientation. The ISO-L8R200 is a basic black stand -- I really wanted to try the new and very swoopy Aperta stands, made of aluminum. But I decided to take IsoAcoustics’ advice. Visit the site for gambling Cop17 online casino bonus 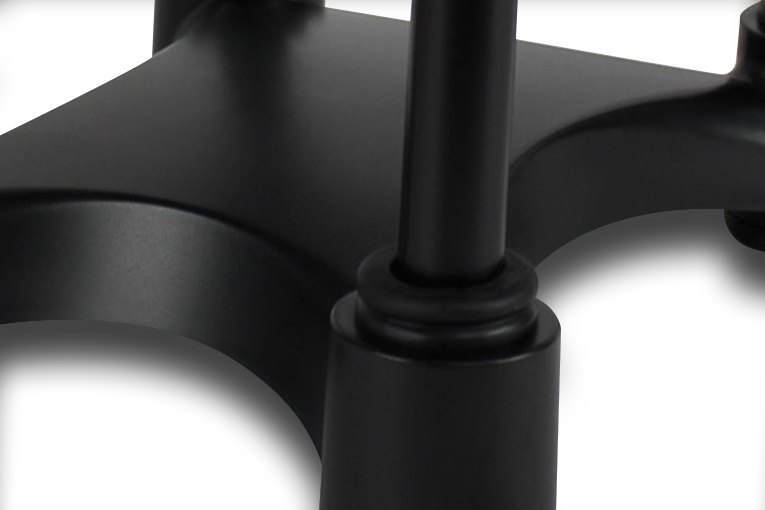 When the IsoAcoustics ISO-L8R200 stands arrived ($149.99 USD per pair), two things about them amazed me. First was their elegance of design. The entire system comprises four poles and two shelves fitted with simple rubber damping attachments. Second was how light they are.

The ISO-L8R200’s fit and finish are excellent. It has a gorgeous look that got from the wife not only got an approving nod, but requests to put things other than speakers on them. To give the IsoAcoustics some stiff competition, I used a stack of very heavy cookbooks that would raise the speaker to exactly the same height as the L8R200s. Then I listened to music -- mostly files from my Apple iMac, with the speakers driven by the Oppo HA-1.

Assembling the IsoAcoustics stands was straightforward and easy. Just remember to get the poles well seated into the isolators. (You might want to use a spirit level to ensure everything is set up correctly.) From there, you can experiment with placement. IsoAcoustics recommends that you begin with an equilateral triangle described by the speakers and your listening position. They also recommend that you aim the speakers directly at your ears. If your ears are above or below the speakers’ acoustic centers, raise the front or back of the stand’s upper element until the speaker is aimed precisely at your ears.

I went straight for a torture test: Sir Colin Davis conducting the Staatskapelle Dresden in Berlioz’s Te Deum (16-bit/44.1kHz FLAC, Profil). This massive score calls for an oversized orchestra, vocal soloists, four choruses, and a pipe organ. The differences in sound were not subtle. On the books, the sound was what I’d grown used to when the speakers had been on regular stands, with superb clarity, in-your-face dynamics, and a wide-open soundstage.

Switching to the ISO-L8R200s yielded a very different sound that I’ve struggled to describe. At first, it sounded as if I had lost a little bass, but that turned out to be fallacious. Instead, what had happened was that all of the instruments and voices gained air and space. That apparent lack of bass turned out to be something like the opposite of compression. It sounded as though I had lost compression and added more bass. And the quality of it was exceptional.

Still, I doubted my own ears. So I tried a recording of a small jazz ensemble. Miles Davis’s Kind of Blue (24/192 FLAC, Columbia/Legacy) is multimiked mono mixed to stereo, but at least they were all there in the same room, all playing at the same time -- no overdubs -- with plenty of microphone bleed to give you a sense of the space. Again, the speakers sitting on the books sounded great. Jimmy Cobb’s brushed cymbals were like a pillowy bed for Miles’s stabbing blurts and Bill Evans’s impressionistic comping. With the Focals on the ISO-L8R200s, the same thing happened as before. Suddenly, there was more air, more breathing room. The size of the soundstage grew. The effect of these stands was not subtle. I didn’t have to struggle to hear it. Even with a recording of a solo record, such as Nick Drake’s Pink Moon (16/44.1 FLAC, Island), the room space opened up, as did the sense of being there. 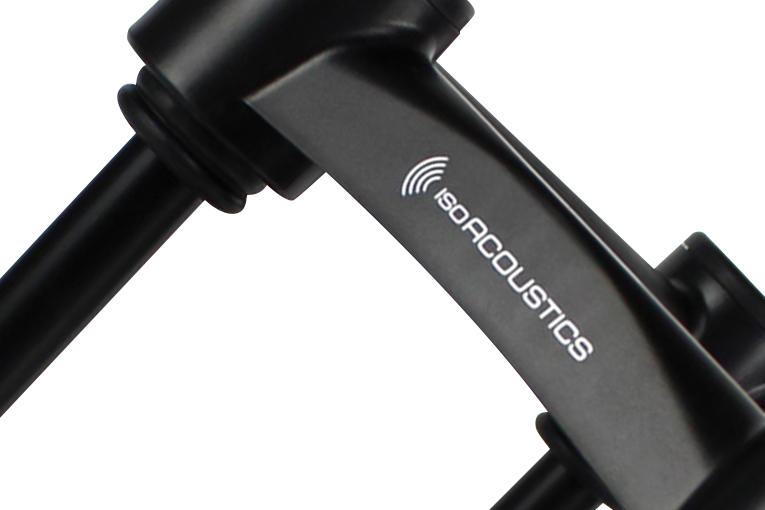 I talked to some industry people I trust. One, who works with a very high-end, highly celebrated speaker manufacturer, told me, “You know, Dave Morrison is a really nice guy, and I would love to say his stands work, but they don’t. Just buy some Sound Anchors and you’ll be much happier.” That was a downer. Then again, Dynaudio now includes a pair of IsoAcoustics stands with all of their professional monitors. Surely that says something about the quality of the stands.

Morrison offered to put me in touch with a dozen sound engineers who religiously use his products -- guys with mantelpieces full of Grammys. But as much as I’d love to waste their time and would enjoy hearing stories about recording sessions, I am now completely confident that I have the measure of what these stands accomplish.

The amazing thing is that the IsoAcoustics ISO-L8R200 sells for $149.99/pair at Sweetwater or on Amazon. In both cases, if you don’t like them, return them -- and send me a note about how wrong I was. But I don’t think I’ll get many angry notes. All 19 reviews at Sweetwater are five-star reviews. That almost never happens. If you can’t tell, this, too, is a five-star review. I loved the ISO-L8R200s, and am now a proud owner of a pair. Miss them at your peril!