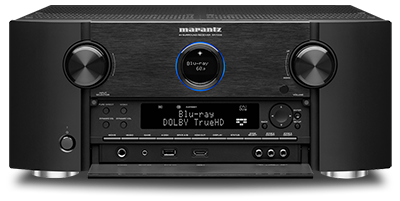 Marantz has been a presence on the American market for over 60 years. From the high-end masterpieces of Saul Marantz’s (1911-1997) day to today’s value-conscious winners, the company has stuck by its customers. There was a short time when the name lost some cachet, beginning in 1964 when Saul sold the company, until the 1980s, when Ken Ishiwata began to exercise some influence. Since then it’s been ever upward, as the new owners -- D+M Group (formerly D&M Holdings), who also own Boston Acoustics, Calrec, Denon, and Premium Sound Solutions -- aim to take a place at the top of each price range. To see how they’re doing, we chose the SR7008, a 9.2-channel, 125Wpc A/V receiver with a list price of $1999 USD.

Open the box to reveal another gorgeous piece of Marantz industrial design. The SR7008 has the black case and curved faceplate that has set Marantz components apart for the last decade. In fact, their only challengers in this field are the even better-looking -- and far more expensive -- Classé Delta models. Measuring 17.3”W x 7.5”H x 16”D and weighing 28 pounds, the SR7008 is massive but sleek, like a Bentley Continental GTC. The front appears to have just two knobs, between them a porthole display of the same size as the knobs, and an on/off button. My wife loves its simplicity: Select the input with the left knob, set the volume with the right, and she’s ready to go. We both love the minimalist look.

Around back are inputs and outputs galore -- virtually everything you could want except for balanced outputs. The SR7008’s nine channels of amplification are rated at 125Wpc at 0.08% distortion into an 8-ohm load. Marantz doesn’t specify the frequency response or the number of channels driven, so let’s be kind and assume that you’d be really well set if your speakers have an efficiency of around +88dB.

The remote control is backlit, easily fits the hand, and has clearly marked buttons -- if you can read eight-point type. It’s a bit of a disappointment after the nearly perfect remote NAD supplies. Wouldn’t it be nice if we could combine the Marantz’s gorgeous looks with the utility of NAD’s remote? Still, the SR7008’s remote is adequate, just nowhere near the beauty and utility of the SR7008 itself. Marantz has developed a keen free app for controlling most of the SR7008’s basic operations via an iPad, iPhone, or Android smartphone. They don’t make a big deal of it, but the app is good enough that I used it 99% of the time, resorting to the remote only when I needed to make changes to the setup.

The SR7008 is chock-full of tech. If you’re looking for width and height channels, it supports Audyssey DSX and DTS Neo:X. The Audyssey system contains MultEQ XT32, which is their ultimate flavor of MultEQ, as well as SubEQ HT, LFC, Dynamic EQ, and Dynamic Volume. It also has DTS-HD Master Audio and Dolby TrueHD. (God bless old Ray Dolby, 1933-2013 -- he changed the world.) The SR7008 also has a bit of tech I’ve become addicted to: Hybrid Digital (HD) Radio. If you haven’t checked out the wild-west territories being staked out on the FM dial’s hidden HDR stations, you can’t imagine what you’re missing. My dial is stuck on KUT3 (HD): jazz 24 hours a day. Hallelujah! In an era when only a few manufacturers seem to care about FM sound, hail Marantz for providing a really solid FM tuner. Saul Marantz, creator of the definitive tuner, the Marantz 10B, would surely be proud.

Marantz is also charging into the future with the SR7008’s seven HDMI inputs -- almost enough even for an incorrigible collector like me. And I love the SR7008’s three HDMI outputs. Two are for monitors, but this receiver has three zones, and Zone 2 has its own HDMI output. People with high-bandwidth networks will be pleased to see AirPlay, DLNA 1.5-certified Audio/Photo Streaming, Internet Radio, and streaming-service capability from Pandora, Spotify, SiriusXM, and flickr. I’m especially happy to see the last, given flickr’s recent upgrade, which gives all subscribers a terabyte of free storage. Also, for those of us who suffered through years of not being able to play a digital signal in Zone 2, you’ll be pleased to know that the SR7008 can not only send a digital signal there, it can send a simultaneous digital signal to Zone 1 as well. Plus, four of the amplifier channels are freely assignable. I use two of them to operate a whole-house music system, which saves some money.

I have no intention of getting into the Apple-vs.-everyone-else fireballing so popular these days. But for those us with iPhones, iPads, or iPod Touches, the SR7008, like many modern receivers, is AirPlay enabled. That means you can broadcast your music through the SR7008 and listen through your mind-blowing, multi-behemoth speakers and subwoofers. Sadly, Apple seems to be protecting the Apple TV, so you can’t do all the fun video things that you can with Apple TV and AirPlay. I look forward to the day when buyers won’t be forced to buy an Apple TV and can just use their receivers to blast out their neighbors’ eardrums playing MetalStorm Wingman with the game on the big screen and their iPad as the controller. I’m sure it will happen someday.

The engineers at Marantz have created a setup program with an ideal balance of simplicity and depth. Using the wizard function is so straightforward and comprehensive that you can use it without worrying about underutilizing the SR7008’s potential. On the other hand, if you want to hire a setup specialist, the menus are deep enough that the technician will be able to refine every parameter of the audio and video signals.

The Marantz SR7008 is made in China, as are most home-theater receivers or processors costing less than $4000. Pop their tops and you’ll find that a lot of those brands have similar parts. The big differences are in the electronic design, visual cachet, GUI, and the implementation of the various licensees’ products. Given all that, Marantz seems to have conjured the right magic to deliver sound and vision of the highest order, all wrapped up in a beautiful and easy-to-use package.

I trace the evolution of the SR7008 back to 1978, when Marantz hired Ken Ishiwata to design products for Marantz Europe. Ishiwata proved that high-performing, low-priced electronics could find a slot in a crowded marketplace. Things really changed in 2002, when D&M Holdings bought Marantz from Philips. (Saul Marantz had sold his high-end stereo company to Superscope in 1964, reportedly because he’d lost so much money creating the 10B tuner.) D&M also owns Allen & Heath, manufacturers of some of the most widely used pro-audio mixing desks. Pink Floyd folklorists will recognize A&H as the people who created the quadraphonic system used by Rick Wright for panning sound around concert venues.

As with all recent Marantz products, the SR7008’s sound was clean and clear, with a good sense of depth. It perfectly caught both the woody character of Paul Chambers’s bass and the satin sheen of Bill Evans’s piano in the DSD version of Miles Davis’s Kind of Blue, and switching to a six-eye LP of the original Columbia album showed that they haven’t skimped on the phono section. It was decent enough for all but the most discerning readers of our sister publication SoundStage! Ultra. 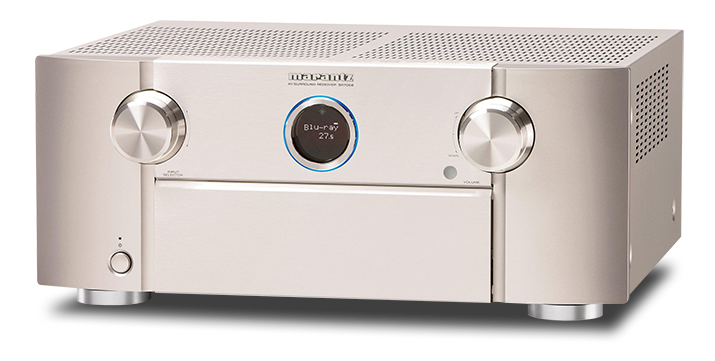 Linn Records consistently makes amazing-sounding discs and hi-rez downloads. The Avison Ensemble’s recent recording of Corelli’s Violin Sonatas Op.5 (SACD, Linn CKD 412, or 24-bit/192kHz download ) has astonishing depth. The tutti in the second movement of the Sonata No.1 in D Major is a perfect example. The violin rises from the ensemble, soloist Pavlo Beznosiuk clearly playing from the front of the quartet. When the other instruments come in, the recording is so clear that you can see their seating order. Running the 24/192 stereo version loses any sense of surround, but the gains in clarity compensate. Ditto for Erwin Stein’s chamber version of Mahler’s Symphony No.4, performed by Trevor Pinnock and the Royal Academy of Music Soloists Ensemble (SACD, Linn CKD 438, and 24/192 download). The music has a wide, convincing soundstage that the SR7008 reproduced with no problem at all.

Would I trade my monster Anthem Statement A5 for the SR7008's amplification stage? No. But the Marantz’s power amps ran out of steam only once, and that was during the very, very loud train wreck in Super 8, following the oh-so-sweetly romantic boy-girl rehearsal. It’s one of the loudest moments I’ve ever experienced in a film. The loudest was in Melancholia (take a hint from the title; if you’re in any way depressed, avoid this film), in which the Prelude to Wagner’s Tristan und Isolde, in an arrangement by Kristian Eidnes Andersen performed by the City of Prague Philharmonic Orchestra led by Richard Hein, looms over the film’s climax and reaches volumes that would impress Mötley Crüe.

Streaming worked well, too. Mama is a frightening tale from the demented mind of writer-director Andrés Muschietti. Vudu’s HDX version looked 99% as good as a Blu-ray through the SR7008. The Marantz assisted in making the quiet moments before the, er, loud moments (I don’t want to give away the story) sound clear and immersive.

I like to watch the occasional music video, and remember all too well when MTV was the only option -- and the music they played sucked. Thank God for YouTube and Vimeo. Here are some videos I use a lot in testing: thank you, KCRW (http://youtu.be/rVyjgwJSm8U and http://youtu.be/LFasFq4GJYM) and KEXP (http://youtu.be/itSXsRWDJu8). In these three videos, pay attention, respectively, to the percussion, the bass and vocals, and the lead guitar. Also, in the first video mentioned, note at the 4:29 mark how reverberation on the singer’s “ooo” simulates a huge soundstage that complements the otherwise direct recording.

The Marantz SR7008 is a frontrunner in every way. The double nature of its front panel is a perfect metaphor for what lies inside: You can keep it simple, like the two-dial front, or you can flip down the panel and go as deeply into setup as you want. It’s also very good looking, not like the industrial boxes of most of its competition. Still, there are a few other marquee products you might want to look at.

Then there’s the Anthem MRX 700, identically priced at $1999, and perhaps the SR7008’s most compelling competitor. Would I choose the Anthem’s amazing purity of sound, or the more-up-to-date tech and almost-as-good sound of the Marantz? I don’t know. It would almost depend on how I felt the day you asked me -- they’re that close. Anthem and Marantz are both great companies, and these are both great machines. But I’d probably go with the Marantz. The tiebreaker is my long-suffering wife, who has to learn completely new systems almost monthly, and she loves the SR7008’s simplicity and ease of use, not to mention its looks. That makes the Marantz SR7008 this reviewer’s choice.