This will date me, and maybe you, too. When I see the name Shinola, the first thing to hit my brain is not an expensive watch made in Detroit, or a $1500 leather bag, or a “studio quality” speaker. My association with the term even predates the joke between actors Richard Ward and Steve Martin in The Jerk. In my youth, Shinola, in business from 1877 to 1960, was the second-ranking shoe polish in the US, after Kiwi. It was even more important as an insult: “You don’t know shit from Shinola.”

The insult stuck for a couple of reasons. First, alliteration is attractive and easy to remember -- “shit from Shinola” comes readily to the tongue. (Would you remember “You don’t know a speaker from a turntable” or “You don’t know a car from a hamburger”? They’re not even funny.) Second, in a quick, alliterative statement, you can insult a person’s intelligence and their powers of observation. And in just six words, you can impugn their obviously crappy judgment -- or, perhaps, their inability to judge crap.

I wouldn’t normally pay attention to a $1500/pair loudspeaker from a recently established (2011) luxury-goods company whose name honors a defunct shoe polish. There are too many excellent active speakers at or near the price and size of Shinola’s new Bookshelf powered wireless Bluetooth speaker -- e.g., the Acoustic Energy AE1, Focal Shape 50, KEF LS50, Sonos Play:5, or my own choice, the Eclipse TD-M1.

I paid attention to the Shinola Bookshelf for one important fact: It’s designed and built by Thomas Barefoot and his cohorts at Portland’s Barefoot Sound, the super power mentioned in the title. Regular readers know that I’ve been on what seems an eternal quest for the best professional nearfield monitor. When it came time to cast the ultimate vote of spending my own money and granting pride of place to a pair of reference speakers, I chose Barefoot’s Footprint01 ($3745/pair). At the time, they were the least expensive minimonitors in the Barefoot collection, a position now taken by the Shinola Bookshelf, which Barefoot coproduced with Shinola. (Has anyone else noticed the irony of a company named for a shoe polish allying with a company named Barefoot?) 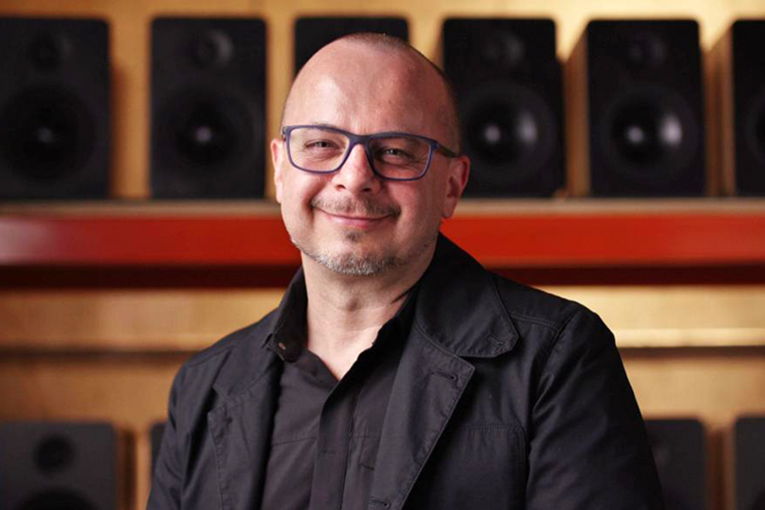 Shinola’s design imperative forced Barefoot to come up with a system at a price point that was completely new to his company. Their normal design method is to provide a high-quality, 24-bit/192kHz ADC/DAC, and run it all through a DSP crossover and then to an array of high-powered Hypex amplifiers, one per driver. Hypex might ring a bell from a couple of years ago, when I wrote two articles about amplifier designer Bruno Putzeys. Although they can put out as much as 2000W of power at full roar, Putzeys’s amplifiers are incredibly efficient -- something you and your power company might appreciate.

In the Shinola Bookshelf, Barefoot has come up with a completely new design. A pair of Bookshelfs has one 100W amplifier per speaker, both amps housed in the left-channel speaker. This makes financial sense -- you need only one power supply and one power cord. Barefoot doesn’t specify, but I’m certain these amps must be less expensive than the relatively costly Hypex units. The Shinola is single-ended; Barefoot speakers are balanced throughout. Given that you’ll probably be using these in the nearfield, it’s probably OK to eschew balanced operation. And despite the fact that the Shinola’s tweeter doesn’t look like the driver used in my Barefoot speaker, the folks from Shinola tell me the tweeter in their speaker is the same as in the Footprint01. 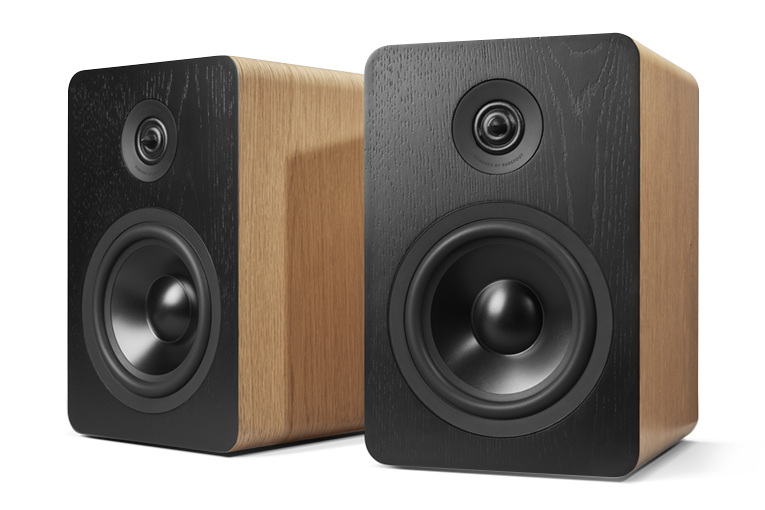 Still, the Shinola Bookshelf is hardly a cut-rate knockoff. The speakers weigh 17.5 pounds (left, active) and 16.3 pounds (right, passive), both weights pretty darn heavy for a minimonitor measuring only 12”H x 8”W x 9”D. Part of the reason for the heft is that the cabinet is made of an oak wood composite of uniform density; each cabinet is tension-braced and hand-finished. Shinola includes all required cabling, including a cute-looking power cord that looks like something from a postmodern European steam iron. Bad news: Like almost every other speaker maker, Shinola is selling speakers that need stands without including stands in the price. Good news: That lets us use the Rolls-Royce of speaker stands, the IsoAcoustics ISO-200 (ca. $200/pair). And the Shinolas’ packaging deserves mention: The speakers come wrapped in soft microfiber bags in nice-quality boxes of dense cardboard.

The active speaker has all the inputs and controls; the passive speaker has two stereo banana-plug jacks. The cable between the two is the limiting factor in distance between the two speakers. On the input side of the active speaker are two analog inputs, via 3.5mm stereo jack or RCA. There are digital inputs via coax, USB Type-C, and Bluetooth. The Bookshelf’s in-room frequency response is specified as 48Hz-22kHz, ±3dB. 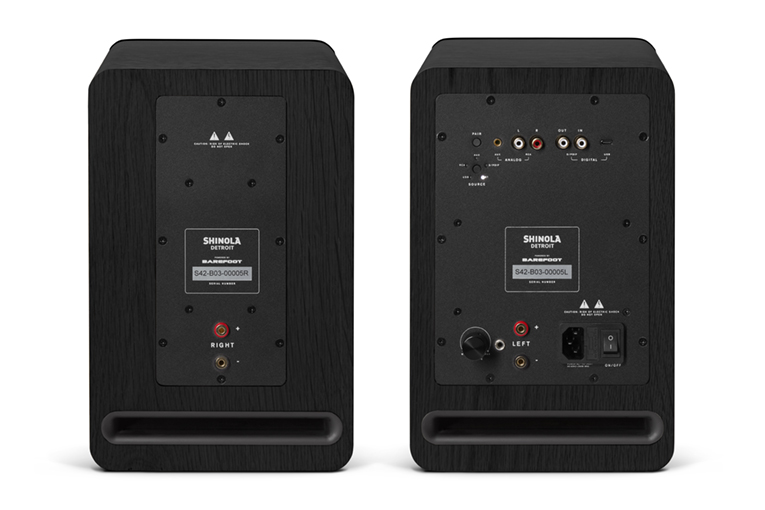 I was curious how different or similar the Shinola Bookshelf and Barefoot Footprint01 might sound. As you’d expect, the Footprint01’s bass extends lower and plays louder. Playing “So What,” from Miles Davis’s Kind of Blue (Columbia 88697 33552), the Footprint01 allows you to hear more of Columbia Studios’ woody room ambience. That also improves the speakers’ ability to throw an accurate soundstage. That dimensional cue is diminished through the Shinolas.

Part of the reason is that the Footprint01 has a much slower rolloff in the bass than the Bookshelf. Again, this is the result of a design choice. Shinola has added a vent, which means you’ll need less power to play louder, but it also means a rather steep rolloff in the bass. These things never work out precisely in real rooms, but theoretically, the Shinola should be 18dB down at 24Hz, then continue to roll off at that steep curve until there’s nothing left. The Footprint01’s gentler rolloff means that it should be down just 12dB at 19Hz. So much for the numbers -- don’t expect either speaker to produce anything in the way of sub-20Hz bass.

The Footprint01 also plays much louder than the Bookshelf. I don’t ever take the chance of ruining my ears by playing rock at rock-concert levels, so I seldom push the Footprint01s anywhere close to their limits. In any case, the Shinolas played as loudly as I’d ever want to listen in the nearfield. 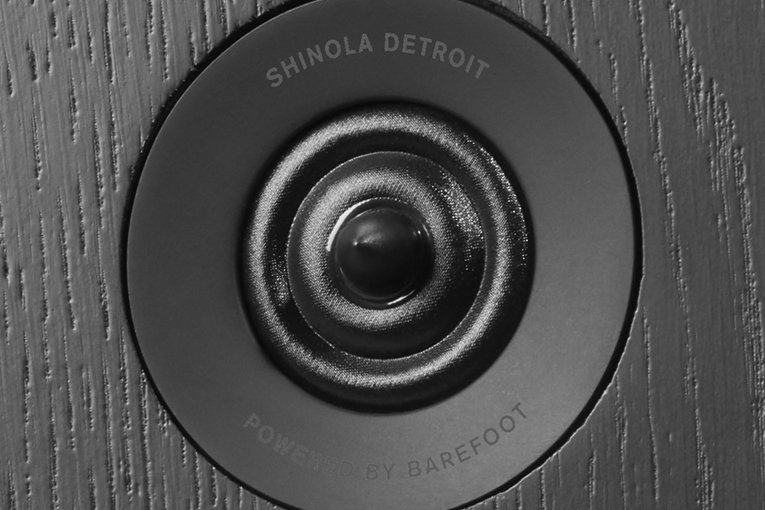 A song that should be played at every audio demo but almost never is is “It’s a Hard World,” from Supertramp’s Some Things Never Change (CD, Oxygen 63245-90002). The engineering is stunning, especially in the atmospheric bass. In this track’s first 90 seconds the band throws in ultradeep bass synths and a finger-popping bass solo that bounces off my chest like a howitzer. Then they add a damp, reverb’d ambient atmosphere as dense as an aural cassoulet. While the Shinolas sacrificed some of the deepest bass, the impact was still there when I turned them up high enough.

The Shinola Bookshelfs had three big surprises in store for me.

The first was that they liked to be played loud. With a cut like “Bewitched, Bothered and Bewildered,” from Brad Mehldau’s masterful Songs: The Art of the Trio, Volume Three (16-bit/44.1kHz FLAC, Warner Bros./Tidal), the Footprint01s sound great at low volume -- the Shinolas needed some juice to strut their stuff. Anyone who loves jazz has to hit their knees to be alive during the time of Mehldau. If you’re searching for the heir to Bill Evans’s impressionistic brand of intellectually muscular jazz, look no further. Check the beginning of this track, in which Mehldau uses the keys to replicate the sustain pedal, so that the melody can get a clipped sound. Amazing pianism. And for you professional piano players, I don’t think that effect is possible using the sostenuto pedal, but who knows. In any case, the Shinola speakers faithfully captured Mehldau’s remarkably powerful, percussive playing.

Which brings me to the second discovery. Thomas Barefoot seems to be a midrange junky. One of the reasons musicians so love his professional speakers is because through them they can hear the delicate details that differentiate various players. The day I interviewed Barefoot, he got a phone call from the music director of a famous TV show. They’d just had one of the biggest names in all of music on the show, who’d asked the music director why he wasn’t using Barefoot speakers. He declared ignorance. The star, in the most pleasant terms, demanded that he rectify the problem tout de suite. As I sat there with Barefoot, the music director told him that if the star called, Barefoot should cover for him by saying that the show had requested a pair of Barefoots for evaluation. It’s good to be powerful. 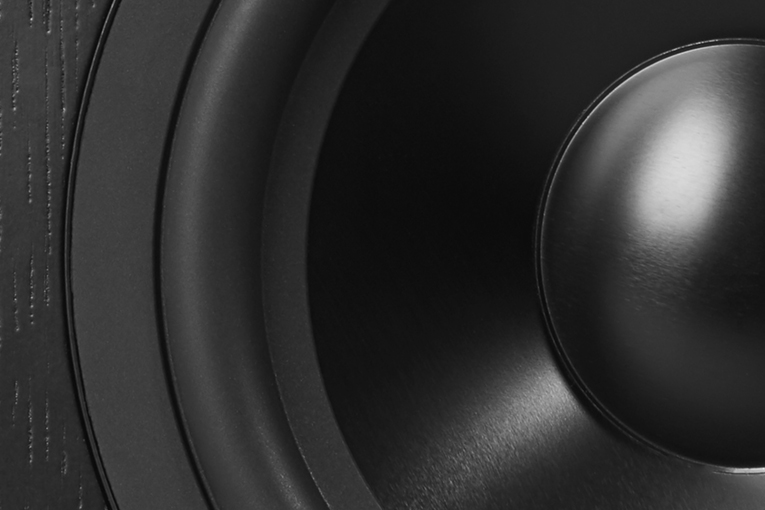 So I wondered how the two-way Shinola speakers would compete with the three-way Barefoot Footprint01, complete with midrange driver to cover that all-important part of the audioband. Again, the volume level was important, but given enough juice, the Shinola’s midrange was actually very convincing for a two-way speaker -- an amazing feat. How Barefoot was able to get such clarity of inner detail is a testament to his abilities as a speaker designer. In fact, one of the reasons so many musicians, engineers, and producers demand Barefoot minimonitors in their recording studios is the Barefoots’ ability to reproduce sparkling inner detail in ways similar to classic electrostatic speakers such as the Quad ESL 57.

Surprise No.3: Barefoot recommends that the Shinola Bookshelfs be used firing straight forward. I disagree. Their sound improved substantially when I aimed their tweeter axes at my ears, or so that the axes crossed just behind my head, with the speakers sloped so that the tweeters are barely below my ears.

There were also a couple of less pleasing surprises. The Shinolas turn themselves off automatically -- if you leave them on, and one morning nothing seems to be working, you have to push the Source button on the back of the left speaker. I wish they’d get rid of that “feature.” They’ve also replaced lights with sounds to indicate that the speakers are turned on. If you aren’t prepared for the sound -- it’s sort of a bass growl -- and the speakers are turned up, you could be in for a startling surprise. 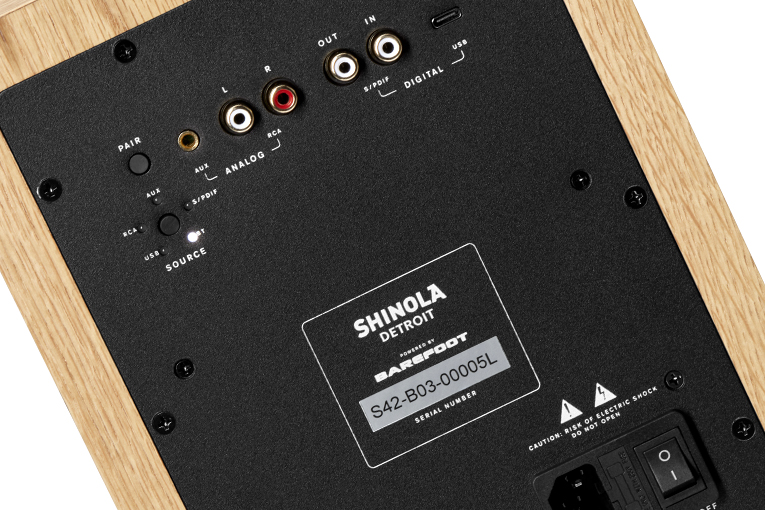 Also, all switchings among sources must be done on the left speaker’s rear panel. If you suddenly want to hear the differences among three versions of “It’s a Hard World” -- say, a rip from the CD, a streaming file, and the LP -- you’ll have to press the left speaker’s Source button, running through its five positions (S/PDIF, BT, USB, RCA, Aux). Shinola should create an app to control the speaker’s volume and source selection. They also make a turntable -- between the streaming services and your own vinyl connection, you can use the Shinolas without any sort of external preamp, volume control, or switching capability.

And, of course, the Shinola Bookshelfs can accept a Bluetooth signal -- if you have a smartphone and a streaming subscription, you’re set for music: Just press the Pair button on the back of the left speaker. Using Bluetooth also lets you use your phone as a volume control. Bluetooth gets a bad rap in some circles, and the sound is most definitely different from using your computer or an analog source, but that difference is not disqualifying. My guess is that most people considering buying the Bookshelfs are doing so because they suspect their music will sound better through them than through Apple AirPods. 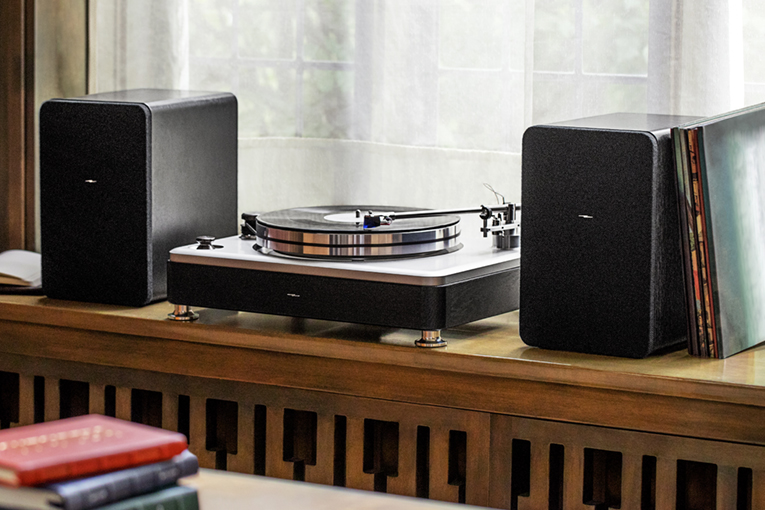 But to say that the Shinola Bookshelf smokes the Apple AirPod is to damn the Shinola with faint praise. As with any good speaker, feed it garbage and it’ll sound like garbage. Anything with a Yamaha DX7 synthesizer in it is guaranteed to sound more like shit than Shinola. But play a beautiful recording with abundant inner detail, such as Sufjan Stevens’s “Mystery of Love,” from the soundtrack of the film Call Me By Your Name (CD, Sony Classical 88985484392), and the Shinolas will display an alliance of detailed delicacy and substantial bass power that’s rare for a speaker of its size and price.