I like a band with some tension in it.

Say what you will about the music made by artists who truly like one another—even after touring together in a cramped vehicle for weeks and suffering through the endless hassles of life on the road—I’ll take the music of musicians like Ray and Dave Davies, or Sam Moore and Dave Prater, people who could barely tolerate one another offstage but could create magic together once they faced an audience. From that tension comes great art.

In 1970, trumpeter Miles Davis assembled one of the most explosive units of his long and varied career, when 29-year-old saxophonist Gary Bartz and 19-year-old bassist Michael Henderson were added to the existing lineup of keyboardist Keith Jarrett, drummer Jack DeJohnette, and percussionist Airto Moreira. Davis’s band was in heavy transition since longtime members Wayne Shorter and Dave Holland had announced their desire to move on. Davis’s appearance at the 1970 Isle of Wight Festival marked a major turning point; essentially, the final time Holland and second keyboardist Chick Corea would play in his group. With Henderson—Stevie Wonder’s bassist to that point—sliding in to focus on electric bass, the band was set to embark on a year that would involve extensive touring.

As Jarrett has since stated, it was a band full of contradictions: the pianist himself was at odds with playing amplified music, Henderson had no background in improvised music, and Davis had turned his back on playing ballads. And there was more.

Twenty-five years after the band broke up, Bartz told an academic conference examining Davis’s influence on music and culture how the trumpeter added tension to the mix. “One time onstage,” recounted the saxophonist, “Miles whispered in my ear, ‘Gary, what’s wrong with Keith?’ I looked over at Keith, and he was staring at me with this expression on his face, like he was mad at me or something. What I didn’t realize until much later was that Miles had gone up to Keith earlier and asked him, ‘What’s wrong with Gary?’”

That’s the kind of mind game Davis loved to play on his bandmates to keep them on their toes.

In December 1970—with the band settled into a comfortable groove, recording a live album during a six-night engagement at the 163-seat Cellar Door nightclub in Washington, DC—Davis decided to shake things up again.

On December 19, the last night of the band’s run at the club, Davis invited guitarist John McLaughlin to sit in. McLaughlin had been recording sporadically with Davis for more than a year, but had resisted joining the trumpeter’s band, preferring to pursue his own music and continue playing with the band Lifetime. But Davis felt McLaughlin held the key to pushing the sextet into new territory. Jarrett wasn’t pleased; which probably was precisely the reaction Davis hoped to elicit.

The double album that resulted from the Cellar Door sessions, entitled Live-Evil (LP, Columbia G30954) and featuring a surrealistic cover painting by French artist Mati Klarwein, was released on November 17, 1971. On November 26, 2021, the album was re-released as part of Record Store Day’s RSD Black Friday event. The packaging is a reproduction of the original release, but the discs are pressed in teal-colored vinyl. 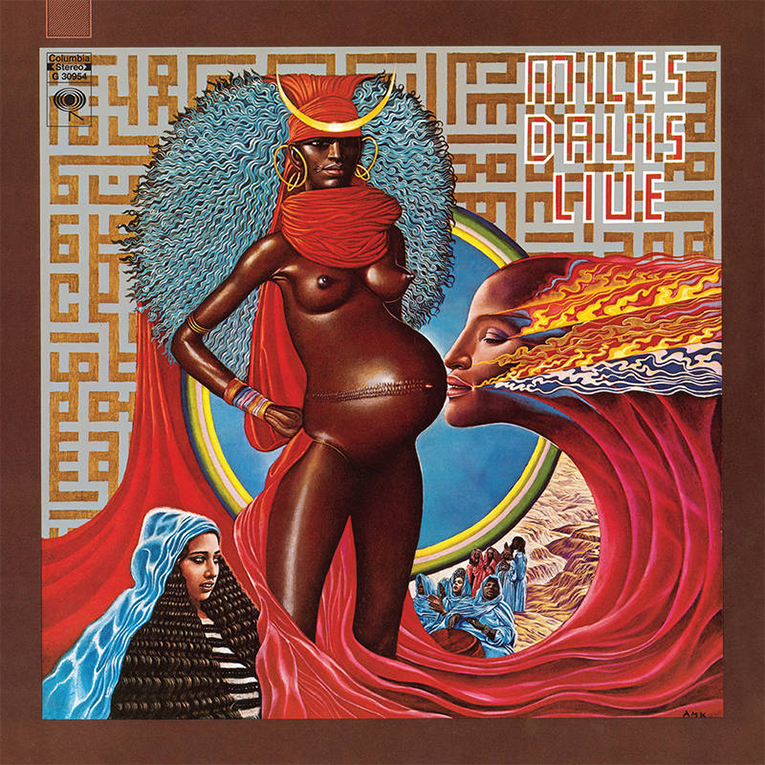 Live-Evil is far from a standard live recording. In fact, the album represents the zenith of the editing work Columbia producer Teo Macero did for Davis during that era. The bulk of the double-LP set—some 86 of the total 102 minutes—was drawn from the augmented band’s second and third sets on December 19, 1970, but Macero moved some parts of the recordings around. However, large chunks also came from studio sessions dating back to February 6, 1970. And, while the live sections are highly amplified funk vamps and improvisations, some of the studio work is as surreal as Klarwein’s cover art.

Side 1 begins onstage in the club, except that Macero is already playing tricks on your ears: while the first 3:24 is mainly taken from the tune “Directions,” from the night’s second set, there’s an eight-second segment that Macero lifted from a May 19 studio session, then another longer pickup from the studio, and finally, two unrelated live sections from a different composition, “Honky Tonk.” Together, these assorted parts are presented as the first track, “Sivad,” which is titled to mirror the Live-Evil wordplay.

When I first heard the track, in early 1972, I knew nothing about Macero’s razor-blade-and-tape magic, of course. Nor was I aware that Davis didn’t use a wah-wah pedal himself on his early electric recordings, like Bitches Brew and In a Silent Way; that was Macero manipulating sound with the device in postproduction.

No, I was only aware that “Sivad” sounded like nothing I’d ever heard. Henderson repeats a phrase that runs up and down the scale, Moreira adds some squawking accents on a cuica (a Brazilian friction drum), and Davis plays his horn through said wah-wah at very high volume. After the ferocious opening section, Davis brings the band way down, for a woozy, bluesy segment that builds enormous tension. While Davis plays short horn phrases—with and without his electronic effects—Jarrett, McLaughlin, and Moreira explore various accents and background colors. And the payoff to all that tension-building isn’t some explosive climax, but a section of broken rhythm and the first of several long, corrosive-toned McLaughlin solos that would eventually accumulate to be the highlight of the entire project. Briefer solos by Jarrett and Davis follow the same pattern, and then the song just fades away.

What comes next seems like a fever dream from another album: hazy, echoing whistling and a meandering bass line. “Little Church” isn’t tethered to any particular genre; it’s more cinematic scene-setting than a fully realized composition based on a predetermined set of chords. The track comes from a June 4 studio recording of a composition by Hermeto Pascoal, a mysterious albino multi-instrumentalist and vocalist from rural Brazil, whose eerie whistling forms its core. The band behind him comprises an array of all-stars, including Holland, Corea, and Herbie Hancock.

Following that, Live-Evil gets even weirder on the third track. McLaughlin plays a medley of two tunes by Davis and Joe Zawinul with a feedback-drenched tone that sounds like he had put his foot through his amplifier and then turned everything up to 11. Exacerbating the aural assault is the fact that he seems to be duetting with some raw electronic source—it’s actually a combination of Zawinul’s keyboard, Moreira’s percussion, and Khalil Balakrishna’s amplified sitar.

In the context of the early ’70s, the album’s first side was a chunk of music to be reckoned with. More than 50 years on, it still is. 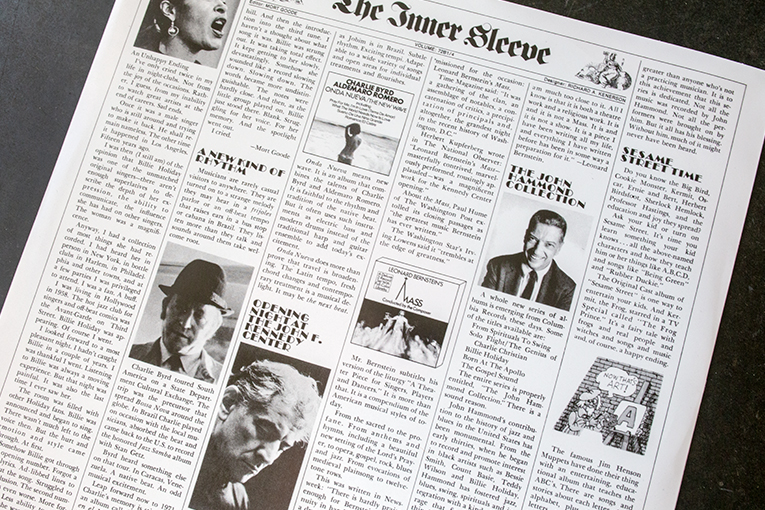 Side 2 opens with Davis’s “What I Say,” which cleaves closer to the line of what was expected back then—loud, unbridled funk, powered by Henderson’s rock-solid lines and DeJohnette’s spectral percussion. Jarrett sounds like he is doing battle with his two electric keyboards—hammering the keys on the piano to generate additional distortion, and mimicking Davis’s short, abrasive runs. The trumpeter’s horn-playing is at its most assertive; the product of what everyone who knew him at that time said was the healthiest period of his life. Film and still photography from the era shows how Davis had changed the way he presented himself, too, swapping out his suave, tailored suits for brilliantly colored clothing, leather pants, huge sunglasses, and flowing scarves.

By this time, Davis’s band was performing at festivals and rock-music venues like Bill Graham’s Fillmore concert halls more often than in small clubs like the Cellar Door, but even in the clubs Davis started playing long, uninterrupted sets and dropping the conventions of playing individual songs and announcing the names of the band members. The irony of using studio tricks to create a flowing composition from several recorded performances was not lost on Macero—the legendary producer was no slouch as a composer himself. Like much of what went on between him and Davis in the studio, Macero found it all something of a cosmic joke when he recounted it years later to Davis aficionados.

While listeners circa 1972 may have missed Macero’s slick editing, there was no missing the signs that Davis was about to shed his musical skin yet again when side 2 closes with another Pascoal piece, “Nem Um Talvez.” He had rejected bebop in 1949 to create what became Birth of the Cool, and switched again when he embraced modal music for Kind of Blue, a decade later. Now, he was pointing the way to a new pancultural sonic landscape—one that he’d fill in with more detail in subsequent bands, when he added Indian percussion instruments and more elements of West African trance music.

The transition to side 3 is smooth, thanks to the third Pascoal piece, “Selim,” which uses the same chord progression as “Nem Um Talvez,” but with Davis playing one of his patented trumpet lines—filled with space and drenched in romantic sentimentality—in parallel with Pascoal’s wordless vocals.

The jump from there to the amplified trumpet that introduces the live track that follows—entitled “Funky Tonk,” although it was actually an amalgam of that song and another version of “Directions”—is stark. In place of lyrical romanticism are scalar runs, with Davis and McLaughlin introducing the theme before handing off to a particularly engaging solo by Bartz. Then, McLaughlin, Henderson, and DeJohnette launch into a long, lurching interlude that might be seen in retrospect as the first glimpse of what the guitarist would seek to extrapolate when he formed his first band, The Mahavishnu Orchestra, the following summer. McLaughlin’s speed, attack, and tone sounded as radical at the time as Jimi Hendrix’s had in 1967. Later in the piece—after Macero had cut back to the other performance—Jarrett demonstrates his ingenuity by using a broken key on his Fender Rhodes electric piano as the root of a long, compelling solo that is filled with the type of gospel-tinged chording that would come to fill his better-known acoustic solo improvisations once he had left Davis and eschewed amplified music forever.

Although entitled “Inamorata,” after a poem written by Conrad Roberts, the first 16 minutes of side 4 is actually a continuation of “Funky Tonk,” with Davis in full, unamplified flight. From there, Macero cut back to a six-minute segment of Davis’s composition “It’s About That Time” from the same Cellar Door set, and then to a studio recording of the same tune, overlaid with Roberts’s dramatic recitation of his poem.

In sum, 1971’s Live-Evil seemed like an invitation into a sonic environment unimagined to that point. While Davis’s studio albums like Bitches Brew, In a Silent Way, and Jack Johnson had hinted at where he was headed, Live-Evil added an element of Black urban funk through Henderson’s grounding in R&B and the bassist’s openness to be guided by Davis to a less linear form of expression. Sly & The Family Stone’s epic There’s a Riot Goin’ On, released just over two weeks prior to Live-Evil, contained similarly broken beats and fragmented melodies—adding to the impression that both Davis and Sly Stone had their fingers on the pulse of inner-city decay and anger as the turbulent ’60s gave way to a new decade. 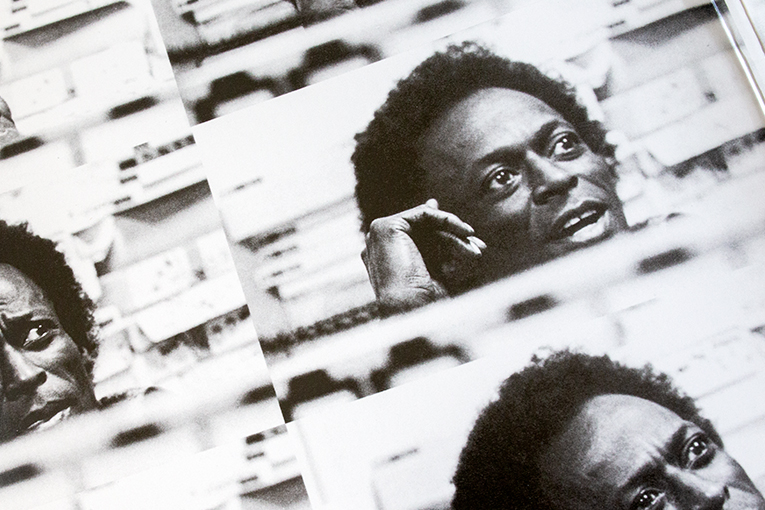 Some Davis fans will, no doubt, be disappointed that Sony Music chose only to release a Record Store Day reissue for the album’s 50th anniversary (a remastered version was released on CD in 1997), but I appreciate having a fresh vinyl version to relive my initial reaction without the addition of expansive retrospective essays or a reimagined soundstage.

Live-Evil provides an interesting snapshot of musicians in transition. Within six months, McLaughlin would launch the mighty Mahavishnu Orchestra, welcoming a large number of rock fans into the jazz tent; DeJohnette would leave to pursue his own career as a leader; and Jarrett would depart to begin his unparalleled 47-year run of extraordinary recordings and concerts. For Davis, Live-Evil was just one in a series of recordings that signaled he was putting acoustic music behind him, and countless jazz musicians would follow his lead into a decade of highly amplified jazz-rock fusion.