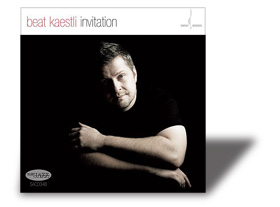 A Swiss-Born Singer Brings Fresh Insight to the American Songbook

I’d been discussing the lack of new male vocalists on the jazz scene with a colleague, and the very next day, as if in answer, the United States Postal Service delivered this appealing disc by Beat Kaestli, his first for the highly regarded Chesky label. Originally from Switzerland, he now makes his home in New York City, and he definitely fills the bill.

Kaestli is an intimate singer whose tenor is a cross between early Mel Tormé and Chet Baker. Just as the title of the disc implies, he "invites" you to listen, never going for the big-band dazzle of Harry Connick or Michael Bublé. I have nothing against big band, but it’s refreshing to find a male singer who successfully offers something different. For this album Kaestli has taken classics from the Great American Songbook and given them a different and intimate approach. He often does this by changing a song's usual tempo, as in "Day in Day Out," and at other times he sings with a very spare backing, without piano, guitar, or drums. "My Foolish Heart" and "Moonlight in Vermont" are duets between Kaestli and Jay Leonhart’s bass, with obbligato from saxophone (Joel Frahm) and trumpet (Kenny Rampton). The singer and his players have such a good sense of pitch that you can sense the chords even when they aren't there.

David Chesky has recorded this cozy album with clarity and warmth, using a single mike and his preferred 4.0 channel layout at his usual recording venue, St. Peter's Episcopal Church in New York. Considering the hushed nature of the performances, Chesky's uncluttered engineering makes you feel almost as though you're eavesdropping.

Be sure to listen to: “I’ve Got You Under My Skin," the final cut. Kaestli sings it at a third of the usual tempo, separating phrases and singing them over a drum ostinato courtesy of Billy Drummond, with lacelike guitar figurations from Paul Meyers. The unusual approach produces an eight-minute hypnotic experience where time seems to stand still.