The term “art music” is one of the least specific attempts to categorize music. Most broadly, it is applied to all western classical music, while at its least precise it has been used to describe everything from 12-tone serialism to the music Kurt Weill composed for the Berlin stage. Most flagrantly, art music has been used to define any music that is not popular, which runs counter to the enormous success found by Weill, to say nothing of older composers like Beethoven or Bach. The term is also used in opposition to music that employs any type of folk idiom—a snobbish dismissal of anything created by someone who lacks formal training.

Worst of all, the term is sometimes brandished like a weapon by listeners who feel they’ve been asked to work harder than they would like to in pursuit of entertainment.

Personally, I reserve it for music that appears to have been created and performed because the artist had no choice but to express something in a totally personal way.

In that sense, the polymorphic Jen Shyu’s Zero Grasses: Ritual for the Losses is art music of the highest degree: music that is so personal and so emphatically expressed that it could come only from her.

As an artist, the 43-year-old Shyu is impossible to classify. Some critics like to place her in the jazz category, based on her work with saxophonists Steve Coleman, Anthony Braxton, Chris Potter, and other musicians. Others point to her early years as an archetypal child prodigy, so exceptional as a violinist and pianist that she had her debut with her hometown symphony orchestra in Peoria, Illinois, at the age of 13. She went on to study theater and opera at Stanford University, but since she graduated, her quest has taken her to study music and dance in regions as diverse as Cuba, China, and Indonesia. With ten languages at her command, multiple awards and commissions, and high praise from critics both in her adopted home of New York City and around the world, it’s hard to avoid using the term “genius,” but let’s not saddle her with that. “Art music” is baggage enough.

Suffused with loss and the emotions that accompany it, this recording—her first with her Jade Tongue quintet in six years—reflects on the death of her father in 2019, racism in the form of Breonna Taylor’s 2020 murder and Shyu’s own upbringing as an Asian-American woman, and, of course, the loss of freedom, stability, and so much more during the global pandemic.

Much of the music was composed for her third multimedia work, commissioned by fellow composer John Zorn and debuted at Brooklyn’s National Sawdust in October 2019, and the events of 2020 serve only to enrich and add depth to that foundation. 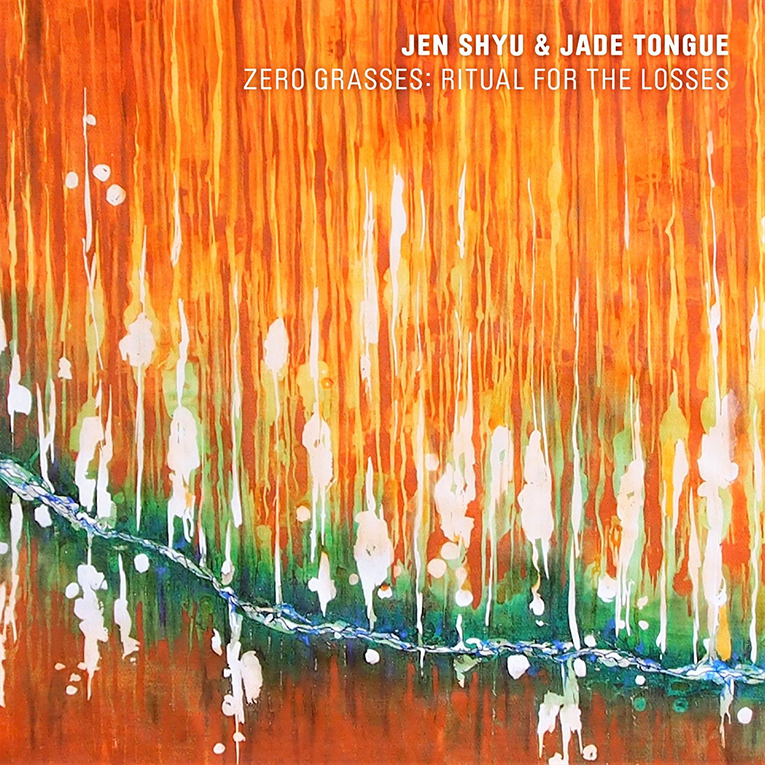 For “The Human Color” Shyu reaches back to 2009 to reprise a piece she wrote about Chinese slaves who toiled in Cuba under Portuguese and Spanish rule. Exchanges between trumpeter Ambrose Akinmusire, violist Mat Maneri, and bassist Thomas Morgan sound cautious and puckered, and Shyu’s voice is sometimes little more than naked breath.

Five pieces at the album’s center are utterly sui generis, sung in a mixture of languages and wordless vocals, and featuring either Japanese biwa—a short-necked lute—a stringed instrument from Taiwan, or piano. Dramatic, almost operatic in places, these compositions are impressive showcases for Shyu’s broad artistry, illustrating how she can create poetic through-lines by the way she phrases single words like “beautiful” and weaves memorable lines like “tears like an arc of raindrops.”

For the two most recent compositions—the four-part “Living’s a Gift” and “Lament for Breonna Taylor”—Shyu combines the words of others with her own compelling orchestration. Commissioned by the American Composers Forum, “Living’s a Gift” is a choral suite with the leader singing all the parts. While expressing the claustrophobia and tension of the global COVID-19 lockdowns, the piece also captures the unselfconscious observations of children, which can occasionally surface touching metaphors like one that refers to a giant cupcake. This creates stark contrast to the threnody Shyu dedicates to Taylor, the young Louisville, Kentucky, healthcare worker who was shot in her apartment by a squad of police officers. Quoting words written by Taylor’s mother, Shyu elevates the prosaic to high art, with gorgeously intertwined trumpet and viola.

Engineer Ryan Streber captures all of this exceptionally well in a mix that maintains Shyu’s voice at center stage, regardless of the accompaniment, and fully communicates the subtlety of her intricate compositions.