Just as the 1940s and ’50s are considered the most creative era in jazz, the late ’60s and ’70s are seen as the art form’s nadir. Record sales plunged, as buyers turned their attention to rock and singer-songwriters, and bars supplanted live acts with recorded music.

Although these moves helped breathe fresh air into jazz -- with particularly rich additions to the genre made by bands like Weather Report, John McLaughlin’s Mahavishnu Orchestra, and Chick Corea’s Return to Forever -- these evolutionary steps had grown stale by 1975, when Davis was forced into early retirement by health issues and drug addiction.

It’s easy to, as some historians have done, draw a direct line from Davis’s self-imposed exile to the rise of Wynton Marsalis in 1982 and state that nothing much happened in between these events. Setting aside numerous discrete developments, like the late-career regeneration of saxophonists Dexter Gordon, Stan Getz, and Phil Woods, and some exhilarating work by pianists Keith Jarrett and Cecil Taylor, a case can be made that one stream of improvised music that arose in the late ’70s was as inventive, distinct, and influential as bebop had been in the ’40s.

One reason it hasn’t been given its due is that it doesn’t fit easily into an existing category. It also defied a lot of musical conventions. Growing from the experimentations that Ornette Coleman brought east from California in 1959, the music featured slippery tempos and shifting harmony, and encouraged artists to draw material from a broad range of sources. When we look back at the era, some major figures are evident: Coleman, his one-time acolyte James Blood Ulmer, the World Saxophone Quartet, and two members of that band, David Murray and Oliver Lake. 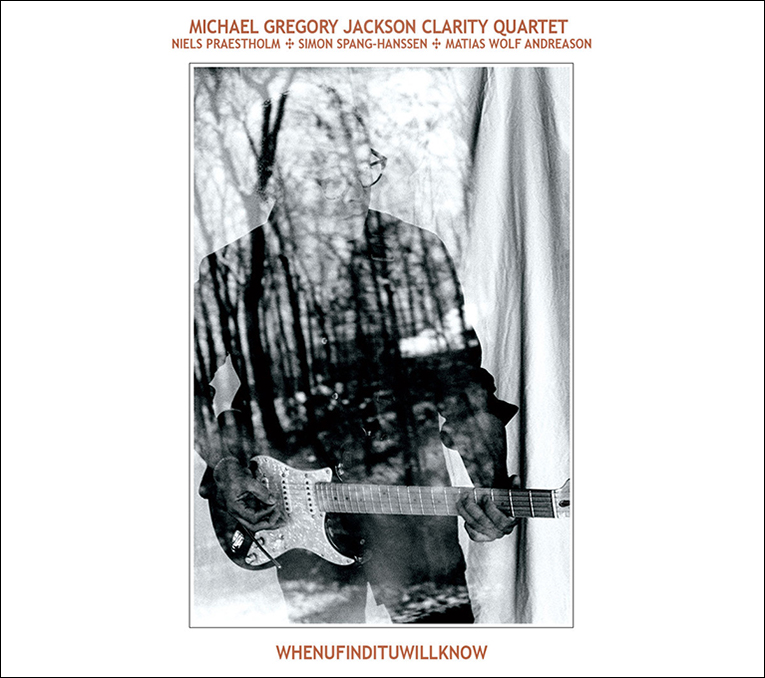 A name you seldom see mentioned is Michael Gregory Jackson. Born in New Haven, Connecticut, in 1953, Jackson was an important contributor to Lake’s bands in his early 20s, and by 1979 he was releasing impressive recordings (in particular, Gifts and Heart and Center) under his own name. Of course, 1979 was also a breakout year for a somewhat better known Michael Jackson, which may account for some of the haze obscuring Michael Jackson the guitarist. In fact, by 1982 he had stopped using his surname altogether. It didn’t help build his reputation that, as Michael Gregory, he shifted his focus in music to more pop-oriented material. He worked with producer Nile Rodgers and was recruited by Mick Jagger for a solo tour. More important in the long run is the fact that Jackson was frequently cited for his prowess by much more famous guitarists like Pat Metheny and Bill Frisell.

As if that weren’t enough to confine Jackson to the category of musician’s musician, he also turned increasingly to music education -- teaching at the New England Conservatory of Music, the California Institute of the Arts, and the Creative Music Studio in upstate New York, as well as in Denmark.

While he kept releasing albums for minor labels like Tip-Toe and Embla, Jackson did not raise his profile again until he began collaborating with trumpeter Wadada Leo Smith in 2009. The past decade has seen him moving closer to broader recognition, and since the death of his renowned namesake he has reinstated his surname.

In 2013 Jackson formed his Clarity Quartet (“clarity” being the term the guitarist uses for the various musical approaches that flow from him), featuring Danes Niels Praestholm, bass; Simon Spang-Hanssen, saxophone; and Matias Wolf-Andreason, drums. Highly independent players with distinctive voices, the three Danes come from backgrounds as diverse as Jackson’s, which enable them to create music that alludes to a wide range of sources yet moves in an exceptionally fluid manner between them.

This colorful palette of reference points makes WHENUFINDITUWILLKNOW an album that operates in several directions and never reveals where it might go next. Consider the contrast of “Clarity 6,” that echoes Coleman’s music in its unison melody line and skittery percussion, and “Ah Yay,” which illustrates Jackson’s love of Brazilian music with wordless vocals and a lilting theme. Despite the conceptual distance between the pieces, Jackson and his band give them a molten treatment that make the songs sound wholly of a piece. They sound like two parts of one thought. 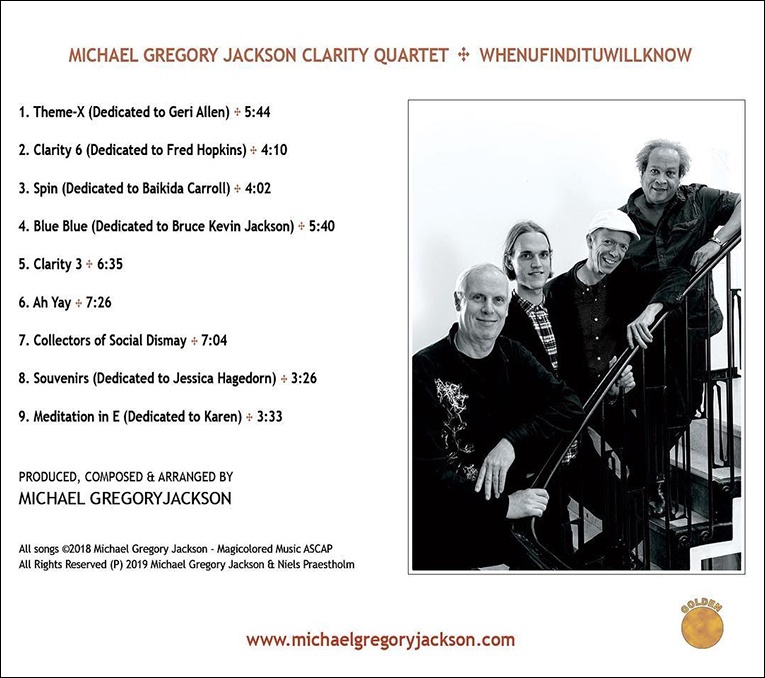 Whether playing unison lines with Jackson, as on “Clarity 6,” or taking the lead voice, Hanssen is an excellent foil for the guitarist, and Jackson occasionally alters his tone to move into the same textural ground -- making their connection even closer. On “Spin,” led by bassist Praestholm, Jackson shifts between unison playing with the saxophone and a squonky growl that shakes up the tune’s structure. “Souvenirs” allows Jackson to expand into some ecstatic playing while the tempo slides freely behind him.

The slippery rhythm and fluctuating components of “Souvenirs” brings to mind the band that in many ways epitomized the spirit of that vibrant era in the ’70s and ’80s. Led by drummer Ronald Shannon Jackson -- no relation to the leader here -- the Decoding Society struck the same free stance as the Clarity Quartet, and Michael Gregory Jackson’s range of approaches to the guitar is as varied as the Decoding Society’s Vernon Reid.

While Reid -- who, with his band Living Colour, also has a Jagger connection -- has been acknowledged as an influential pioneer of contemporary electric jazz, Jackson remains a layer further below the surface. That situation deserves to change, and at only 66 the guitarist might still reach a wider audience. There’s no question that this fine album deserves that kind of attention.