“With Music from Big Pink,” wrote musicologist Greil Marcus in his landmark 1975 book, Mystery Train, “the Band presented a rough moral drama. It had none of the mythic clarity of, say, John Ford’s movies; it came through a modern haze, something like Robert Altman’s McCabe and Mrs. Miller, obscure in its plots, dialogue hard to catch, communicating with a blind humor and a cryptic intensity nothing in rock ’n’ roll has ever remotely touched.”

Recorded in New York City in January 1968 and Los Angeles the following month, the Band’s debut album was released on July 1 that year -- less than a month after the assassination of U.S. presidential candidate Robert Kennedy and a few months after the killing of Rev. Martin Luther King had set many American cities on fire. The riots associated with the Democratic National Convention in Chicago were still to come, and the Vietnam War raged on in the living rooms of American TV news viewers every evening. Many observers, like Marcus, saw Music from Big Pink as a tonic for all that insanity. It sounded rustic and timeless, and eschewed the psychedelia of Jefferson Airplane and The Beatles, and the amplified volume of Jimi Hendrix and Cream. The music developed by Robbie Robertson, Richard Manuel, Rick Danko, Garth Hudson, and Levon Helm in rural Woodstock, New York, sounded so novel and relaxed, in fact, that guitarist Eric Clapton later said that he quit Cream and moved to Woodstock in hopes of joining the Band, while Beatle George Harrison briefly escaped the Lennon-McCartney battles to hang in the country. You may, in fact, draw a direct line from Music from Big Pink to the festival held in Woodstock in August 1969; the recording embodied the back-to-the-land spirit that Woodstock came to represent.

The backstory of how the five members of the Band landed in upstate New York has become so much a part of rock legend that you may want to jump ahead, but bear with me, youngsters.

Arkansas native Helm had relocated to Toronto with fellow Razorback, rockabilly singer Ronnie Hawkins, in the late ’50s. As the Hawks, Hawkins’s backing band became tremendously popular in Toronto, but their constant touring schedule -- bouncing between Canada and the South -- took its toll on members. There was a massive amount of turnover. At 15, Toronto native Robertson joined, and eventually the remaining three members were recruited from other Canadian bands.

By the mid-’60s, though, the Hawks were ready to escape the dictatorial Hawkins, and circumstances led them to manager Albert Grossman, who hooked them up with his main client, Bob Dylan, as the singer continued to move away from his roots as an acoustic performer. Although Helm returned to Arkansas, the others toured widely with Dylan, enduring the boos and catcalls that rained down on them from audience members who felt betrayed by Dylan’s electric conversion.

In 1966, that period skidded to a stop along with Dylan’s Triumph motorcycle, which went down on a rural road. The extent of Dylan’s injuries remain a mystery, but they were enough to warrant a major change in direction and allow him to escape the limelight at a house in Woodstock. Soon, Grossman had lured Robertson, Manuel, Danko, and Hudson to the area as well. The latter three took up residence in a butt-ugly salmon-colored house, and the summer rental quickly became a clubhouse for Dylan and the former Hawks. Within months, Helm returned to the fold and a fascinating musical amalgam -- a combination of blues, country, folk, and Southern gothic -- began to take shape.

Marcus devoted an entire book -- Invisible Republic -- to the music Dylan and the others created in the basement of the house named Big Pink, exploring the way the songs reflected the mythologies that had shaped the American psyche.

Much of the focus of the music came from Robertson’s fascination with what he had seen, heard, and experienced as a young foreigner touring the South with Hawkins and Helm. A natural storyteller, Robertson loved weaving together tales he heard from Helm’s relatives with lessons learned from hard-bitten music veterans like Sonny Boy Williamson. Cycled through the blender of musical talents of his bandmates, all of whom played multiple instruments, and expressed through their distinctive voices, songs like “The Weight” and “Caledonia Mission” sounded like nothing that had come before, and Robertson’s characters -- Crazy Chester, Fanny, Luke, Carmen, and the betrayed narrator of “Caledonia Mission” -- took on credible life in just a few verses.

In the hothouse atmosphere of Big Pink’s basement, Dylan, Manuel, and Danko also created memorable, disruptive storylines; some little more than nonsense lyrics, but others loaded with layers of meaning, like “Tears of Rage,” written by Dylan and Manuel, and “This Wheel’s on Fire,” composed by Dylan and Danko. Much of that material was captured on the various incarnations -- both legal and illegal -- of the so-called Basement Tapes, and Dylan rode off, reinvigorated, to harden his vision of biblical allegory and tall tales into what would become his 1967 album, John Wesley Harding. 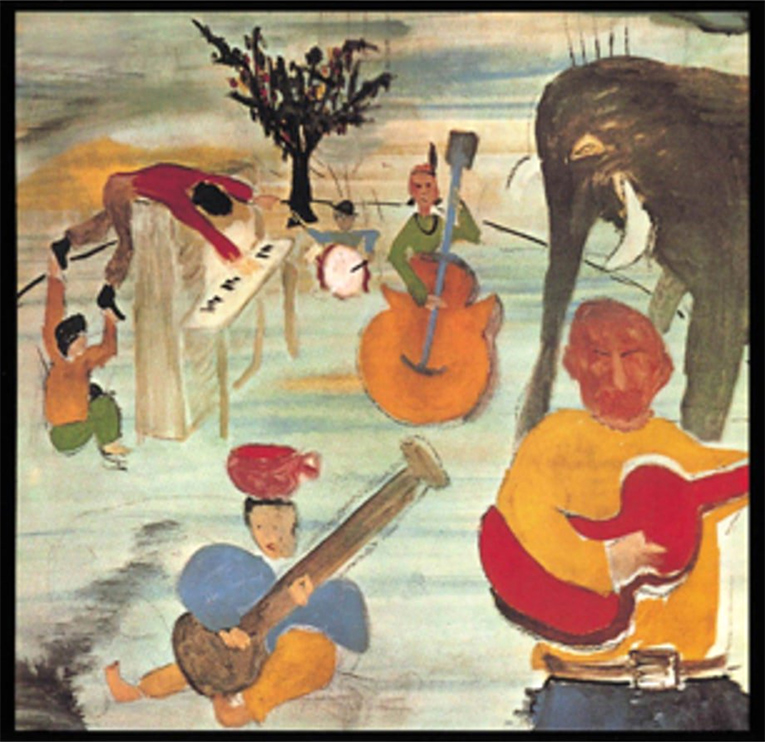 With the nameless backing band renamed the Band, Grossman negotiated a Capitol Records contract and moved them to New York City’s A&R Studios with producer John Simon, who had worked with Leonard Cohen and Simon & Garfunkel. Just 26 and still relatively inexperienced, Simon agreed to Robertson’s idea of recording the music the way it had been rehearsed in Woodstock: live on the floor with the musicians in a circle, unburdened by sound baffles or other separations. That was anathema to most producers in 1968, particularly when multiple instruments -- some amplified -- and voices were featured, but it was a critical aesthetic decision for Music from Big Pink. It gave the album a true sense of authenticity and place. It sounded like music that came from humble, haphazard beginnings, and if a saxophone leaked into a vocal mix or a drum sound seemed muffled, so much the better. In short, it sounded like communal music, and even if you knew nothing of the musicians’ backgrounds you might well assume that they had been living and working together for a very long time.

As well, Music from Big Pink introduced listeners to unique-sounding artists. The voices of Manuel and Danko were like no others, while Hudson’s omniscient musicality and skewed sense of rhythm and harmony announced a truly original character. Those who had heard Dylan’s ’65 or ’66 tours in person or the Nashville-recorded album Blonde on Blonde already knew something about Robertson’s distinctive tone and attack, but Music from Big Pink gave the guitarist free rein. With a sound that was much more based in the ’50s than any of the dominant guitarists of 1968, Robertson’s Telecaster stood in severe contrast to Hendrix, Clapton, Keith Richards, or Jeff Beck.

Listening again to Music from Big Pink at a distance of 50 years I am struck as much by the songs that didn’t jump off the album into posterity as I am by the familiar tunes like “The Weight.” Three of them are songs by Manuel, whose emotional fragility was already on stark display, a decade before his ultimate decline became evident. Revealing connections to Tin Pan Alley that would rise again on the early music of Elton John and Bernie Taupin, “In a Station” lays bare the tortured soul of a musician who already sounded doomed. If there is a voice that can break your heart more readily than Manuel’s, I haven’t heard it. In retrospect, “Lonesome Suzie” sounds like an early model for the aching vocal on Danko’s “It Makes No Difference,” which the Band would record seven years later. It is somewhat less moving for it being in the third person, but no less freighted with dread. “We Can Talk,” also by Manuel but featuring vocals by all three of the main singers, still sounds too slight to stand alongside songs that are destined to become rock standards, even if it did contain the notable couplet: “I’d rather be burned in Canada / Than to freeze here in the South.” Who else wrote lines like this?

Another of the lesser lights -- Robertson’s “To Kingdom Come” -- is striking for the way its jangly uproar follows the solemnity of the epic “Tears of Rage,” and in retrospect the sonic dichotomy this created would come to define all of the Band’s work.

Of course, it remains to ponder whether the half-dozen Tier 1 songs on Music from Big Pink -- three by Robertson, one each by Dylan in conjunction with Danko and Manuel, and one by Dylan alone -- have ever been topped on a debut album. Each found a permanent place in the Band’s repertoire, and “The Weight” has been covered by dozens of artists, ranging from Aretha Franklin to Waylon Jennings.

To the 11 original songs, the 50th anniversary release adds six alternates or outtakes.

Three of these, versions of Big Bill Broonzy’s “Key to the Highway,” Robertson’s “Yazoo Street Scandal,” and Dylan’s “Long Distance Operator,” are perfectly representative of the rowdy, amplified side of the Band, but stand apart from the dusty oddities that made the final cut. They’re good, but not essential.

The alternative version of “Lonesome Suzie” lacks the haunted tone of the master take, and the New Orleans lilt used here undercuts the dark lyrics, rendering the heroine merely lonely rather than morbidly so.

An unfinished a cappella take of “I Shall Be Released” is a gorgeous, unadorned example of Manuel’s tortured voice at its best and illustrates how Manuel and Danko built their ghostly harmonies, but it’s little more than a curiosity piece, and some fans will undoubtedly be disturbed that a raw performance like this has seen the light of day when the principles are no longer alive to bless it.

But what would a Band reissue be without controversy? Authorship of the material remains a sore point for those fans who believed that Robertson conned his bandmates out of the ownership of songs that some say were jointly developed. Although he says he made peace with Helm during the drummer’s final days, Robertson remains a divisive figure. His decision to enlist the help of two Bruce Springsteen-related veterans -- mix engineer Bob Clearmountain and mastering engineer Bob Ludwig -- is doing nothing to endear him to those disgruntled fans. Within days of its release, this remixed Music from Big Pink was drawing howls of outrage, based on the way that Clearmountain and Ludwig treated the source material. For these fans, Simon’s original hazy soundstage was part of the album’s charm. Many liked the way the voices and instruments blended.

But Clearmountain made his name creating a huge sound for Springsteen’s signature albums in the ’80s and ’90s, as well as for Bryan Adams, INXS, and others, and he’s gone for that kind of widespread clarity here as well. Contemporary listeners, coming to the Band’s debut for the first time, may well appreciate the newly highlighted details and broader sound, but those familiar with the original don’t appreciate his meddling. Skip Heller, a veteran Los Angeles-based guitarist and producer, posted on a social media channel: “Big Pink is a record whose sonic character was blurry and ambiguous, which gave the music a sense of it coming from a secret, almost far-off place. Removing that is about the same as colorizing a movie. The individual performances are the same, but everything around them is violated.”

How to rate sound then? I’ve settled on a split score: high marks for the technical prowess Clearmountain and Ludwig display in brightening a 50-year-old recording, but a big thumbs down for not respecting the group’s original vision. After all, a big part of what made Marcus, Clapton, Harrison, and others fall in love with Music from Big Pink in the first place was its mystery and handmade, rural nature. Now it sounds like the musicians wrote the music in the same urban centers where it was recorded rather than in a rambling pink house in the country.