Scratch the surface of Americana music -- the top layer that includes Emmylou Harris, Steve Earle, and Jason Isbell -- and you’ll find dozens of performers whose career paths have seldom-if-ever taken them to soft-seat concert halls. These are the hardcore singer-songwriters who spend most of each year driving up and down American highways to beer joints, small venues, and the occasional festival. Better-known musicians may cite them as core influences and industry treasures, but chances are the average fan doesn’t know a thing about them.

Downey, California-native Dave Alvin and Lubbock, Texas-homeboy Jimmie Dale Gilmore are generally known more for their former associations than for their own work. In league with his brother Phil, Alvin was a founder of the Blasters. Along with Butch Hancock, Gilmore fed songs to Joe Ely, and the three of them formed the Flatlanders. Outside of music, Gilmore is also known as Smokey, one of the Dude’s bowling buddies in The Big Lebowski.

Although they’ve criss-crossed the country for decades, Alvin and Gilmore had never collaborated before coming together for a 12-city tour in 2017. That tour and this album have common roots that stretch back to a Los Angeles club called the Ash Grove. Located on Melrose Avenue from 1958-73, the club was a frequent stop for performers like Mississippi John Hurt, Muddy Waters, and Lightnin’ Hopkins, and a popular place for budding musicians like Alvin and Gilmore to catch their legendary elders.

Over Alvin’s snarling guitar, the title song of Downey to Lubbock lays out the territory and experiences the singers share: “You know I’ve been up on the mountain / And I looked for the promised land / And I’ve been to the Ash Grove / And I shook Lightnin’s hand . . . Forty years on the highway / Living on dreams and gasoline / And somehow still surviving on Advil, Nyquil, and nicotine.” 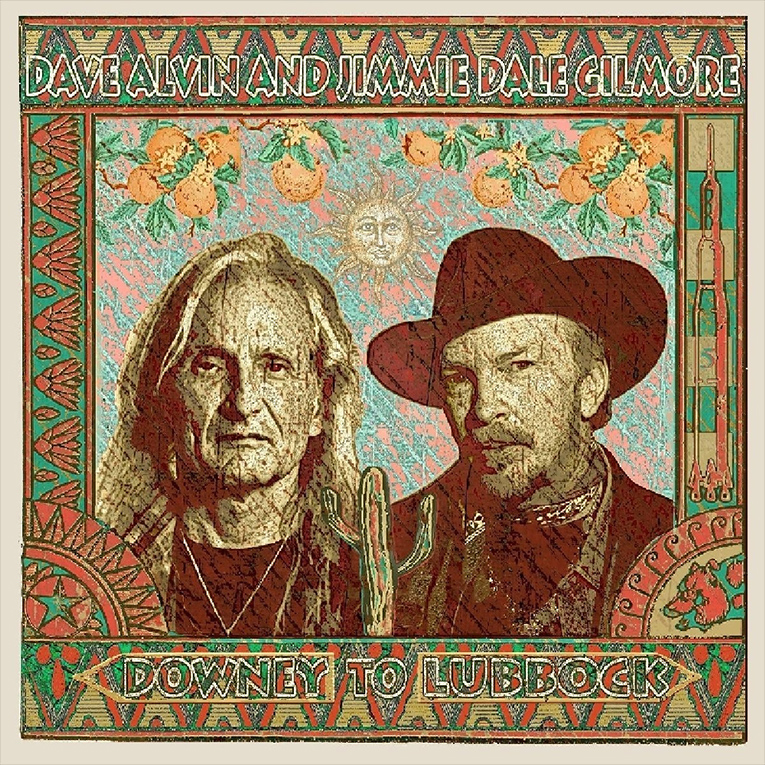 But the most striking thing about the introductory duet is neither the highly textured Stratocaster accompaniment nor the narrative; it’s the voices of the protagonists. Alvin’s is a serviceable, conversational drawl that was pressed into service after he left the seminal LA punk band X for a solo career. Gilmore’s is a high, nasal tenor that immediately stands apart in any setting. Together, those voices represent distinctive corners of American roots music -- East Texas and the industrial suburbs of LA -- and also symbolize the primacy of singer-songwriters who were set free by the unconventional nature of singers like Bob Dylan and Johnny Cash.

The broad scope of the material also reflects the aesthetics of the folk era. Together, they reach back to Woody Guthrie’s “Deportee (Plane Wreck at Los Gatos)” and the Memphis Jug Band’s “Stealin’, Stealin’,” as well as to “Walk On,” a joyous duet that once rang out at the Ash Grove as Sonny Terry and Brownie McGhee finished their sets.

Gilmore shows how effective his high, lonesome voice can be on “Silverlake,” a Steve Young composition that Alvin once recorded but never released. It represents another chunk of highway where the two have crossed paths; Young told both men -- separately -- that he wrote it with them in mind. The Texan also applies his unique sound to “Get Together,” the peace-and-love anthem written by Chet Powers (aka Dino Valenti) and popularized by the Youngbloods.

But the album’s standout -- and most representative -- track is “Buddy Brown’s Blues.” Written by Hopkins, and also known as “98 Degree Blues,” the song takes the duo back to their Ash Grove days, and allows Gilmore to show his rockier side once it develops beyond its acoustic introduction to a chugging R&B core.

Given the disparate elements -- Alvin’s guitar (which he boasts on the title track can “blow any roadhouse down”), acoustic instruments, and their mismatched voices -- the sound on Downey to Lubbock is a mixed bag. It fares better when the focus is on just one of the two stars.

After years treading separate paths, Alvin and Gilmore are investing months on the road promoting this material, and if it’s true that the cream rises to the top, they might find themselves with a late-career resurgence on their hands.