Valerie June: "The Order of Time"

I celebrated my 60th birthday by catching one of the best concerts I’d seen in a couple of years. Consider the context: as someone who reviews music for a living, I see a lot of live performances. Yet this one still resonates, and it wasn’t just the monumental anniversary that made it memorable.

To be sure, the venue -- a former brick schoolhouse at a rural crossroads -- had something to do with it, but the performer carried the weight. After all, in such close quarters, a mediocre performance would have been amplified to the point of annoyance.

The performer was Valerie June, a Jackson, Tennessee, native who has flown under most people’s radar despite having worked as a recording artist for more than 15 years. It wasn’t until late 2013, when her album Pushin’ Against a Stone, co-produced by Dan Auerbach of The Black Keys, began to garner airplay. Like Lucinda Williams or Gillian Welch, June has a voice that cannot be ignored. A nasal soprano with a decided drawl, it sounds ancient in tonality and phrasing, as if she somehow managed to live in an isolated corner of Tennessee without being exposed to modern speech patterns. Her delivery can come across as a bit naive, favoring a sing-song cadence, which adds to the first-blush impression that she is lost in time.

That voice -- and whatever conclusion it leads you to -- stands in stark contrast to June’s reality. Hearing that tonality, accent, and phrasing coming from a woman who might have a side career as a fashion model is a bit startling. Her mass of dreads and retro-chic fashion sense smack you in the face, reminding you not to indulge in stereotypes based on someone’s voice -- or on how someone looks, for that matter.

Lately, a more complete picture of June has emerged, with the publication of her first-person essay in the New York Times about working at the side of her contractor father, who also ran a business promoting pop concerts by the likes of a very young Prince.

Nothing about her strikes you as calculated or inauthentic, which was so charming in her solo show on my birthday. Her stage manner is low-key and self-deprecating, while her technique on guitar and banjo reflects her focus on sound rather than technique. Her playing sounds as distinctive as her singing and has echoes of early Southern blues musicians like Mississippi Fred McDowell and Dock Boggs. It’s little wonder that she attracted the attention of Auerbach, whose band has mined some of the same sources. 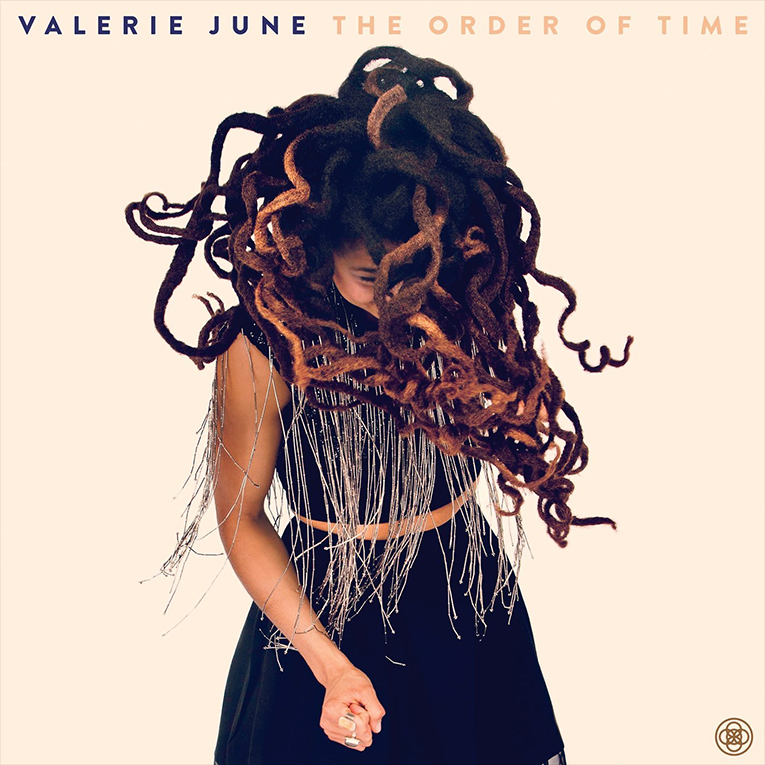 But, as noted, June is no rustic throwback artist, and fitting that voice, attitude, and songwriting style into a contemporary setting proved to be somewhat problematic on her major-label debut. At times, Pushin’ Against a Stone sounded overproduced, with her voice warring with the sonic elements that surrounded it.

Produced by Matt Marinelli, who also plays numerous instruments, The Order of Time mostly avoids that problem. She and Marinelli seem to have found the right balance with the added elements, allowing her voice to become a key part of the mix, whether it is rubbing roughly against resonant drums or searing guitar. They avoid the trap of trying to make the album sound contemporary. Marinelli plays a lot of vintage instruments, and the soundstage suits them. It has warmth and depth that feels as authentic as June.

On “With You,” June uses a string section that recalls the strings that accompanied Van Morrison in the early 1970s, and just as Morrison benefitted from combining his Irish yowl with his so-called Caledonia Soul Orchestra, so does June sound marvelous juxtaposed against the sweet swell of the strings. “Got Soul” also uses sonic juxtaposition effectively, combining a typical Memphis horn section with a country fiddle.

And, always, there is June’s love of rhythm, whether it’s expressed in a vocal riff that is as elemental as young girls chanting while skipping rope or the relentless, driving stomp of “Shakedown,” which sounds like she is channeling McDowell.

As good and varied as June’s songs are, the true victory on The Order of Time is the way she has melded the elemental nature of music -- her unforgettable voice, banjo, and guitar -- and the charm of her live performances with a larger band. Despite the appearance of Norah Jones, Colin Stetson, Steven Bernstein, and others in supporting roles, this never sounds like anything but June’s album. She is clearly in control, and clearly herself.