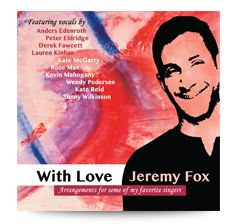 The Art of the Arranger

Music arrangers seldom get their due. Though they handle instrumental ensembles that can make or break the artist out front, their names are usually in fine print on the back cover of the album. I found With Love intriguing because it is the arranger, Jeremy Fox, who takes top billing. Fox has degrees from Western Michigan University and the University of Miami, and since 2001 has coordinated the SMV Vocal Jazz Camps around the US. Since 1999 Fox has received ten awards from DownBeat Magazine, including Best Written Song, Best Arrangement, and Best Studio Engineering.

For With Love, Fox tailor-made arrangements for ten of his favorite singers: Anders Edenroth, Peter Eldridge, Derek Fawcett, Lauren Kinhan, Kate McGarry, Rose Max, Kevin Mahogany, Wendy Pedersen, Sunny Wilkinson, and Kate Reid, who is the only vocalist given two tracks. The instrumentation ranges from studio orchestra to big band, combo, and string quartet, and the various cuts were engineered at seven different studios. There are also different instrumental soloists for each cut during the break section. It must have been terrifically difficult to coordinate all of these forces, but you'd never know it from the smooth sounds, which intermesh perfectly.

The album kicks off with Kate Reid's bouncy version of "That Old Feeling," accompanied by swirling woodwinds, muted brass, and a prominent sax section. Reid provides some scat singing worthy of the late, great June Christy, and the very talented Mark Small aces the break on tenor saxophone.

Other highlights include a slow-burn version of "Get Out of Town" from Derek Fawcett, which starts slow and builds to a great climax, then evaporates into a clever coda that integrates a few lines of "It's Alright with Me." Following it is a lovely version of Stephen Sondheim's "Not While I'm Around," sung with subtle and soulful intensity by Sunny Wilkinson and accompanied by a sonorous string quartet with Adam Diderrich as solo violin.

Wendy Pedersen provides a saucy version of "Girl Talk" with spiky comments from the alto saxophone of Neil Carson. Swedish singer Anders Edenroth serves up a very lush version of "Friendship," with lots of strings and three prominent instrumentalists -- Matthew Shefcik, flugelhorn; Ernesto Fernandez, flute; and Joy Adams, cello. The album closes with "So Many Stars" featuring Kate Reid again, this time with Daniel Strange on piano. There's a video online of Reid and Fox performing this tune with the Henry Mancini Orchestra.

Though each singer shows off fine vocal talents, one must also marvel at the colorful, concise arrangements and admire the Fox touch at bringing out the best in each vocalist. He also has a great imagination. I would never have thought of accompanying Sunny Wilkinson with a string quartet, but it works so well that it sounds like it was always meant to be.

The recorded sound is exceptionally clean, clear, and transparent, even when the scoring features a dozen or more violins. Fox did the arrangements and a lot of the engineering. He knows what his charts should sound like, and gets the desired result.

A lot of these charts sound old fashioned but in an ever-popular vein. Last fall I was at a benefit where our local high school jazz ensemble played some big band charts (very well, I might add), and it was interesting to see a crowd of some 300 people enjoying them -- not just the old folks, but the young ones as well. There will always be a place for this great music, especially if we keep fostering talents like Jeremy Fox, who arranges it so well.