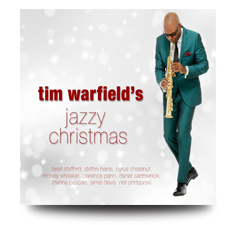 For the past few years, I've received albums of holiday music on the late side. Had I reviewed them, readers would have been hard pressed to purchase one in time for the holiday celebration. This year, however, there have been a lot of fine releases that started arriving in September, so there's no such problem. Starting this week, then, I'll be covering the best of the holiday titles, a group that runs across all genres. These aren't discs you'll find at Walmart or Best Buy, but you can easily obtain them from Amazon.com, CD Baby, or other online dealers. If you're lucky enough to have an old-fashioned dealer in your neighborhood, you can probably find them there.

Tim Warfield has an impressive resume: he's played with some pretty big names, including Christian McBride, Donald Byrd, Marcus Miller, Dizzy Gillespie, and Joey DeFrancesco. Born in York, PA, Warfield has settled back into his native state where he serves as a board member for the Central Pennsylvania Friends of Jazz and is artist-in-residence at Messiah College. Most recently he joined the adjunct faculty at Temple University.

That's the dry but impressive part. Warfield's playing is anything but dry and pedantic. More often it's passionate and impetuous with purpose. Sort of like controlled passion with fits of wild abandon. On this jazzy Christmas CD he takes a handful of familiar holiday tunes and turns them into holiday rhapsodies. "Santa Claus Is Coming to Town" kicks things off at an energetic but slower-than-usual speed, followed by "Let It Snow," "Joy to the World" (which starts with some very raucous sleigh bells), and "God Rest Ye Merry Gentlemen" (they leave the comma out, so I will too). All of these give Warfield a chance to shine, and the same goes for trumpet player Terell Stafford and vibraphonist Stefon Harris, who seem far too important to be called just sidemen.

There are some vocals. Joanna Pascale sings on "Let It Snow"; "Caroling, Caroling"; and "Silent Night." The latter is the only tune that I find unsuccessful. It's a simple tune, originally written with only guitar accompaniment, and it doesn't take well to heavy interpretation or jazz treatments. On the other hand, Jamie Davis is very successful with the vocals on "Oh Christmas Tree," which does lend itself to jazz interpretation.

The recording is close-up and personal, and it sounds as if there was some fairly heavy remixing. The vibraphone in particular is placed well forward, and it's so close that it sounds very percussive much of the time. The piano, trumpet, sax, and bass seem very well balanced, whereas the drums can be a little overbearing here and there with the use of a lot of struck cymbal.

Overall, Tim Warfield's Jazzy Christmas is a great addition to jazz recordings of seasonal music. There's a lot of passion, with everyone involved giving their all. It's very decently recorded and overall quite joyous and merry.

Be sure to listen to: There's a bonus track for Hanukah -- "The Dreidel Song." It's one of those funny merry-go-round-like tunes that keeps rolling on and on. In Jeff Stabley's version, recorded here, it stops, and then one of the players will start it again. It's all done with great humor and virtuoso playing, which makes it totally irresistible.