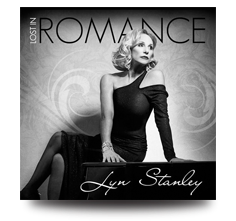 The Ultimate Album about Love

The mellow flugelhorn from Gilbert Castellanos sets an elegant and sophisticated tone for "Change Partners," the opening cut from Lyn Stanley's Lost in Romance, a mood to which the rest of the album adheres. Stanley's vocals are so voluptuous and assured that I was surprised to learn that this is her first album. I had thought it was probably another in a string of successes.

In addition to that sure sense of rhythm, Stanley is blessed with a gorgeous alto voice, an impeccable sense of pitch, a subtle use of rubato, and diction that makes every word count without your being particularly aware of it, since her style is so natural. The late Paul Smith, Ella Fitzgerald's longtime accompanist, took her under his wing, and some of Hollywood's finest musicians back her on this recording.

After the opening number, Stanley turns to Michel Legrand's "Watch What Happens," following it up with "Fever," one of Peggy Lee's big hits. Then the speed goes up-tempo a bit with a scintillating version of "That Old Black Magic," followed by "The Nearness of You." These two benefit greatly from the suave saxophone playing of Bob Sheppard, both when he is soloing and when he's intertwining his lines with Stanley's vocals.

Let me stop right here and say something about the pacing of this album. I can really say it in one word -- perfect. Each song seems to relate to the one that came before while leading to the next, and there's just the right balance of slow to fast. That may sound like a given, but that quality is so rare in albums these days that I noticed it!

"You Go to My Head" brings to the fore another great sideman, trombonist Bob McChesney, who plays with such sweet tone that it almost hurts to think something so beautiful could exist. Of course he's accompanying Stanley's full-moon crooning, which surely provided inspiration. After a few more cuts, McChesney returns in a more playful mood for "What Am I Gonna Do with a Bad Boy Like You?"

Pianist Mike Lang provides the atmosphere for a pair of darker reminiscent ballads, Stephen Sondheim's "Losing My Mind," as well as Johnny Mercer and Harold Arlen's "One for My Baby." Stanley is so successful in these that you'll forget that Frank Sinatra practically owned the last one.

After a sly and saucy romp with "Too Close for Comfort," the album closes with George Harrison's "Something" and Sammy Cahn and Jimmy Van Heusen's "The Last Dance." The latter is extremely satisfying, as it seems to bring the well-planned album to a comfortable, cyclical conclusion.

The recorded sound for Lost in Romance is bold, brash, and sensual. It's warm and rich and full, but the instruments are perfectly balanced with the vocals. I always felt that I was hearing exactly what was meant to be heard. And what I heard was the ultimate album about love, in all its guises, including its absence. Lost in Romance is nearly perfect in execution, and it has real shape as a collection of songs that play in the right order.

Be sure to listen to: "I Just Want to Make Love to You" starts off with a fabulous strut intro from guitarist Thom Rotella, who then proceeds to play under the vocals with the same pointed style that once again moves to the foreground in a mid-song break. Saucy stuff. I loved it.