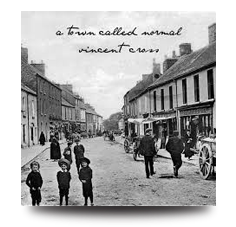 Not Quite Bluegrass, but Very Good Nonetheless

A good 90 percent of the indie albums we receive for review come from agents that have only indie clients. SoundStage! Network writers recommend about five to seven percent. Then about two to three percent come from the artists themselves. A Town Called Normal is one of the latter. That's sort of ironic, because it sounds like it could have been recorded in West Virginia, where I live.

Imagine my surprise, then, to find that Vincent Cross is an Irishman born in Dublin, raised in Australia, and now residing in New York City. He has a super voice that sometimes reminds me of early acoustic Neil Young and other times Robert Earl Keen, with just enough twang to spike things up without becoming annoying. Cross can also produce a fine high-and-lonesome sound when he chooses.

The backup band contains banjos, and Cross himself switches from guitar to mandolin. That's the right instrumentation for a bluegrass band, but then Cross throws in some folksy harmonica, and there are drums on three cuts. I think newgrass might be the best way to describe Cross's music, which combines bluegrass, folk, folk rock, and other influences into a very satisfying whole.

All of the songs on the disc are originals except for "The Cuckoo," which is traditional. Things get off to a good start with the title song, which is followed by the most bluegrass-like cut, "Cursed." The latter sounds like it's from Bill Monroe country, and it features antiphonal banjos to splendid effect. The rest of the album is more eclectic, but it all makes sense and is a very comfortable listen.

As happy as I am with Cross and his band, I'm less enthused about the recorded sound, which is warm to the point of being close to muddy. The banjos rise out of the soup, but the drums never do and the upright bass is not pointed enough. The bass is loud, though, so be careful at setting the volume when you start the first track.

I'm happy to have discovered Vincent Cross, and I have the artist himself to thank. He writes eclectic tunes with good hooks and surrounds himself with instrumentalists that are as good as he is. Cross is definitely worth a listen, and I'll be interested in seeing what he comes up with next.

Be sure to listen to: The second chorus of "Turn Your Eyes" has bowed upright bass in unison with the vocal. It's a sound I'd never heard before in such a rapidly developing song, but it's quite effective.