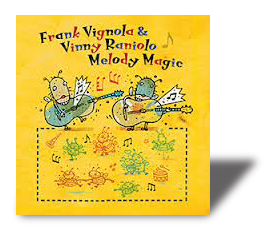 The Melody's the Thing in This Hot Club Collection

I am generally opposed to juicing up classical music. Back in the late days of disco, there was a series of recordings called Hooked on Classics that took themes from classical compositions and set them to a drum machine with a disco beat. Though I was amazed at just how many different melodies could be set this way, I was appalled that anyone might really record these efforts. To top things off, a local movie theater (which I attended at least once a week) latched on to the first LP in the series to play between movie showings. Needless to say, I started being a little late to shows, and at the film's end I moved myself to the back door so that at the instant the last credit was shown I could flee before being aurally assaulted.

So imagine my surprise in finding that I really like Melody Magic, in which guitarists Frank Vignola and Vinny Raniolo have taken favorite melodies and given them the Hot Club treatment. (Perhaps no real surprise, as one of Vignola's recent recordings is a tribute to Django Reinhardt.) Most of the tunes are classical, but also included are Survivor's "Eye of the Tiger," Sting's "Walking on the Moon," and "Beatles Medley: If I Fell / Here, There and Everywhere."

Things get off to a rousing start with "Beethoven's Fifth," with bass guitar providing the pounding rhythm while lead guitar plays the well-known tune. It's played fairly straight, but when the second tune comes in, it's swung for all its worth. The same basic formula works on the second cut, "Carmen Habanera," and it works perhaps not as well on the third track, "Scheherazade," though I have to admit that the addition of accordion and violin to the mix adds a certain sort of appealing sound that can best be described as "funk pseudo orchestral."

Of the remaining pieces, I found the "Beatles Medley" and "Violin Concerto" to be best. "Violin Concerto" refers to the famous composition by Felix Mendelssohn, and it's treated in a particularly imaginative manner that's more somber and weighty than the original. "Swan Lake Scene 1" sounds a bit gypsy, and it also works surprisingly well.

The recorded sound is exemplary, very rich and warm yet never muddy. Be it double bass or bass guitar, there's plenty of clean bass foundation, and upper-register instruments have arresting presence without any harshness.

Overall, Vignola, Raniolo, and their superb additional musicians, which include Zach Brock on violin, Julien Labro on accordion, Mark Egan on bass guitar, and Cassidy Holden and Mat Wigdon on double bass, make this CD a joyous experience that focuses on track-proven melodies in a breezy, amiable way. Melody Magic transcends its genre by presenting arrangements that are downright disarming.

Be sure to listen to: The opening of "Walking on the Moon" has guitar, violin, and accordion playing breathtaking, attention-grabbing unison flourishes. Later on in the track, each player is given a chance to show off his chops. This is the most overtly virtuoso playing on the disc, and all the players are up to it.