Megan Slankard: "A Token of the Wreckage" 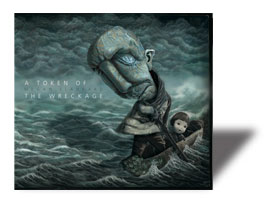 In the video for the title song, Megan Slankard walks past a group of bored slacker musicians sitting on the curb outside a bar. She goes in, finds a location, unpacks her instrument, and starts to play and sing. The musicians from outside find their way inside and provide her with instrumental backing. The footage up to this point is black and white, but it gradually changes to full color as she finishes and leaves the bar. I admit it sounds hokey when put into words, but the simplicity and sincerity of the whole event makes it tremendously effective and uplifting. Slankard’s music is like that, positive and honest to a fault. You won’t regret hearing it, and your life might even be a little better for the effort.

The young singer, still in her 20s, hails from San Francisco. She’s been compared to Rickie Lee Jones, Joni Mitchell, Ani DiFranco, and other female singer-songwriters, and her style embodies country, folk, acoustic, and folk rock, yet doesn’t seem derivative. Slankard’s music supports lyrics that are down-to-earth intelligent and often deliberately ambiguous, letting the listener participate in the creative process through interpretation.

A Token of the Wreckage has been three years in the writing and contains songs that are mostly about coming of age and entering adulthood. The title song speaks of the many pitfalls in growing older, but it suggests we can always find a bright spot along the way. "The Happy Birthday" and "The Pain of Growing Up" are most obviously about the passage into adulthood, but that theme also underlies most of the music. I was especially taken with a song called "Beautiful Makeshift," which indicates that even though two sides of a relationship might seem at odds, the overall picture can become an ideal and satisfying compromise.

David Bryson of Counting Crows mixed the album, and it's largely clean as a whistle without losing any warmth. He introduces meaningful distortion on a few of the bigger tunes. I don’t care for it much, even if it does have purpose, but only ten percent of the album wallows in that excess. The rest is as refreshing as a mountain brook during spring thaw.

I wondered what will happen to Megan Slankard as I thought of Lawrence Lebo, another great female talent I’ve written about recently. I thought about them both as I was watching many sub-standard performers during the dismal Grammy Awards. How is it that talent gets swallowed up in a maelstrom of mediocrity? I want to blame American Idol for setting low standards, but perhaps that isn’t the whole story. After all, the immensely talented and original Esmeralda Spaulding got recognition. You can’t buy A Token of the Wreckage until March 8, but you can watch the

Be sure to listen to: The acoustic guitar, bass, and drums make a beguiling background for Slankard’s vocal. It’s a lovely, complete, wouldn’t-want-to-change-a-thing-about-it sound.