Barbara Stanwyck as The Woman in Charge

Forty Guns (1957) opens in silence. There’s an overhead long shot of the arid prairie, a small wagon crossing it like an ant. In a medium shot, the wagon is revealed as carrying three men whom we later learn are the Bonell brothers: Griff (Barry Sullivan), Wes (Gene Barry), and Chico (Robert Dix). The sound of hooves is heard, getting louder and louder. Suddenly, from around a bend in the road, Jessica Drummond (Barbara Stanwyck) appears all in black, on a galloping white horse, leading 40 horsemen in two ranks. They split up to surround the wagon, and the point of view nervously shifts between high and low shots, emphasizing the tenseness of the situation. Drummond won’t appear again onscreen for another 20 minutes, but . . . what an entrance! Stanwyck was given one of the most memorable introductions ever caught on film.

It turns out that Jessica Drummond and her 40 followers pretty much run Cochise County at her pleasure in this gender-reversing Western that still manages to be filled with plenty of testosterone. Marshall Griff Bonell runs afoul of Drummond when he pistol-whips her alcoholic, no-good younger brother. But she falls for Griff anyway -- he’s man enough to stand up to her powerful personality. There’s some intrigue along the way, and a few shootings -- the ending is not unpredictable, but I won’t spoil it for you.

Samuel Fuller directed this virile 1957 film, and, as usual for him, the unexpected can be expected. His use of CinemaScope is especially interesting. Of course he used its width for long, panoramic shots, and for interior scenes in which actors confront each other from far sides of the screen. But he also used it for extreme close-ups. Most directors avoid these when shooting in the widescreen format, but Fuller uses close-ups to great, often unsettling effect. The maverick director was also a fan of complex crane and tracking shots. For the latter, he had a track built that went the entire length of the permanent frontier main street set up on 20th Century Fox’s back lot. The shot follows a set of characters, and culminates in their arrival at the Western Union office. It takes about three minutes, and is one the longest tracking shots in the history of film. It’s darned effective, too.

This Criterion Collection edition actually contains two feature-length films -- also included is A Fuller Life (2013), an 80-minute tribute to Samuel Fuller (1912-1997) directed by his daughter, Samantha. It’s not your usual talking-heads documentary. Actors and directors who worked with Fuller, such as James Franco, William Friedkin, and Wim Wenders, dramatically read from Fuller’s autobiography as the screen displays still and moving images, many of them from Fuller’s private film library. A Fuller Life flows along perfectly, and is perhaps the best tribute film I’ve ever seen. Like father, like daughter. 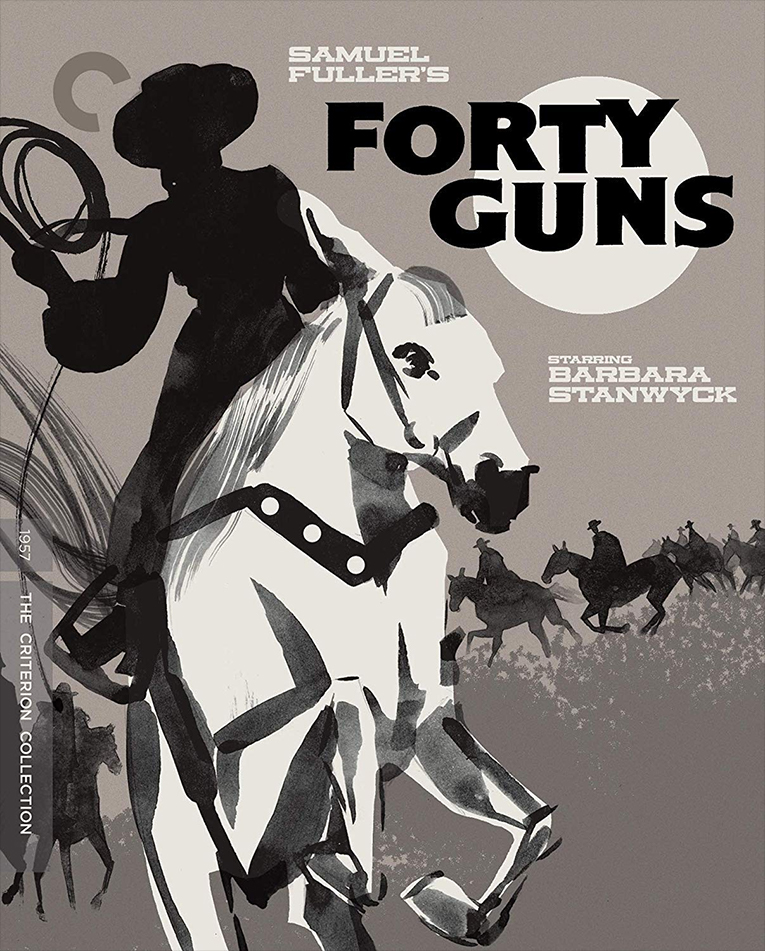 To be expected, Criterion has provided a rock-steady transfer. Joseph F. Biroc’s cinematography should have won an award -- it’s most impressive in this 4K restoration. If your display’s gray scale has been tweaked to perfection, you’ll find the black/white contrast ideal, and will experience even greater depth and definition than is typical for movies of this period. The uncompressed monaural soundtrack doesn’t obscure a single word of Fuller’s dialogue (he wrote the screenplay) or one note of Harry Sukman’s score.

There’s no commentary track, but plenty of audio extras: a question-and-answer session with Fuller, recorded in 1969 at London’s National Film Theatre; an interview with Fuller’s second wife, Christa Lang Fuller, and Samantha Fuller; and an interview with film critic Imogen Sara Smith, who discusses the role of women in Fuller’s films, Stanwyck in particular. There’s also a stills gallery. The booklet contains a well-written, intelligent discussion of Forty Guns by film scholar Lisa Dombrowski, as well as a chapter from Fuller’s autobiography, A Third Face: My Tale of Writing, Fighting, and Filmmaking, posthumously published in 2002.

Forty Guns is an exciting Western that goes far deeper than most, and features a woman in charge -- Fuller gave a woman the upper hand 50 years before it was cool to do so. And did I mention the tornado? Or that Stanwyck did all her own stunts, including being dragged by a horse with her foot caught in the stirrup? Watch and be thoroughly entertained.

Be sure to watch for: When Wes Bonell first meets Louvenia Spanger (Eve Brent), he sizes her up through the muzzle of a rifle. Three years later, Jean-Luc Godard imitated this shot in Breathless.