William Shakespeare was a hero to Orson Welles, who spent much of his career trying to make definitive film versions of the plays. Welles directed an excellent Othello (1951), and his experimental Macbeth (1948) was a flawed masterpiece -- in both, he played the title role. But his greatest homage to the Bard was Chimes at Midnight (1965), which gives a different view of the story of Falstaff and Prince Hal in being a pastiche of parts of Shakespeare’s Henry IV, Henry V, and The Merry Wives of Windsor.

Welles’s version features the relationships among the future Henry V, Prince Hal (Keith Baxter); his father, King Henry IV (John Gielgud); and his adopted father and pal, Sir John Falstaff (Welles). Hal has lots of merry fun with Falstaff, but warns him -- twice -- that once he is king, he will leave his foolish philandering behind. Falstaff chooses not to believe him, and when, at the end of the film, Hal, now Henry V, makes good on his promise and disavows Falstaff, the old man’s heart is broken. 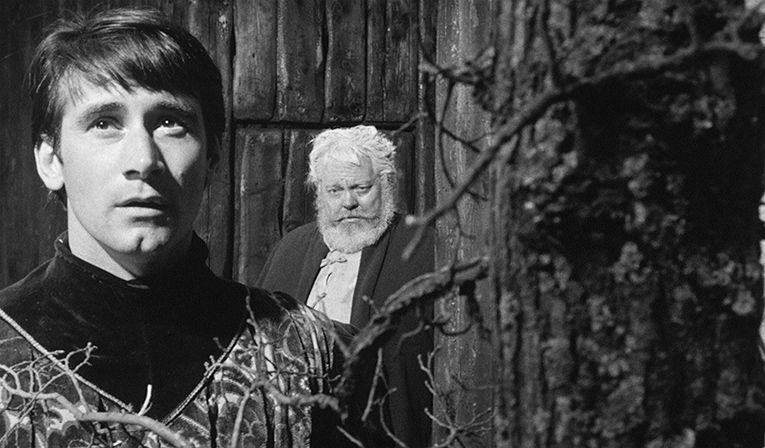 And we feel that -- because Welles’s richly layered performance presents us with a Falstaff who, despite all his drinking and debauchery, is at heart a good man. Most of Falstaff’s problems stem from his tendency to exaggerate. When he tells a tale of being held up by bandits, he keeps increasing the number of thugs who attacked him. After the great Battle of Shrewsbury, he takes credit for killing the knight Henry “Hotspur” Percy (Norman Rodway), even though he hid in the bushes throughout the battle. But all along, in his expressions and nuanced line readings, Welles consistently reveals the great tenderness Falstaff feels for Hal.

As much as I admire Welles’s performance, I was more moved by certain scenes than by the film as a whole. The battle scene, and the conflict and duel between Hotspur and Hal, are high points, as are the many scenes shared by Falstaff and Hal. Welles and Baxter had palpable chemistry -- I never question their feelings toward each other. Another moving scene comes at the end: Mistress Quickly’s eulogy for Falstaff. Quickly is played by Margaret Rutherford, in quite a switch from her lovable, over-the-top portrayal of Agatha Christie’s Jane Marple in four films released in the early ’60s, and which earned her a big following in the US. 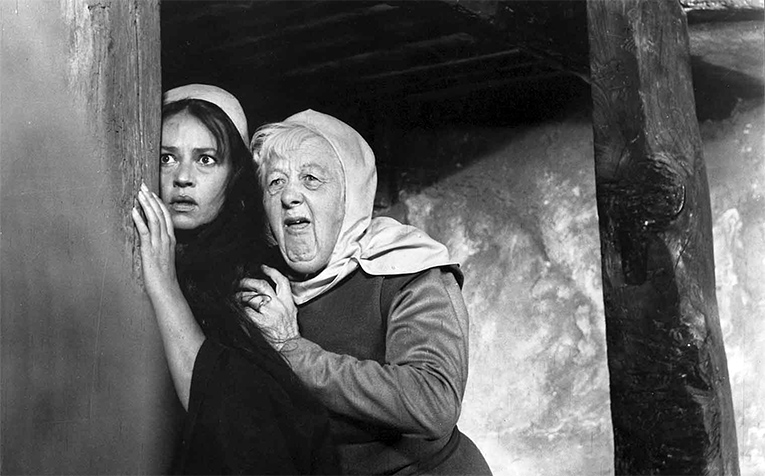 Perhaps Welles cast her for that reason, or because she was a brilliant actor, but it didn’t keep Chimes at Midnight from bombing when it was released in the States. Most critics, not understanding what Welles was trying to do, savaged the movie. Another problem was that the soundtrack was badly out of sync with the images onscreen. Welles had filmed in Spain, often under noisy conditions, so the dialogue and sound effects were looped in postproduction.

The Criterion Collection and the Spanish restorers of the film have corrected most of the problems with the soundtrack, which now seems properly synced. But the dialogue seems recorded at a very low level -- I had to crank my preamp way higher than usual, and even so, I missed some distant dialogue. Welles used point-of-view dialogue -- if a character was in the foreground, we hear him at a normal level; if he’s at the rear of the set, his voice level is greatly reduced in an effort to create sound that matched the images on screen. 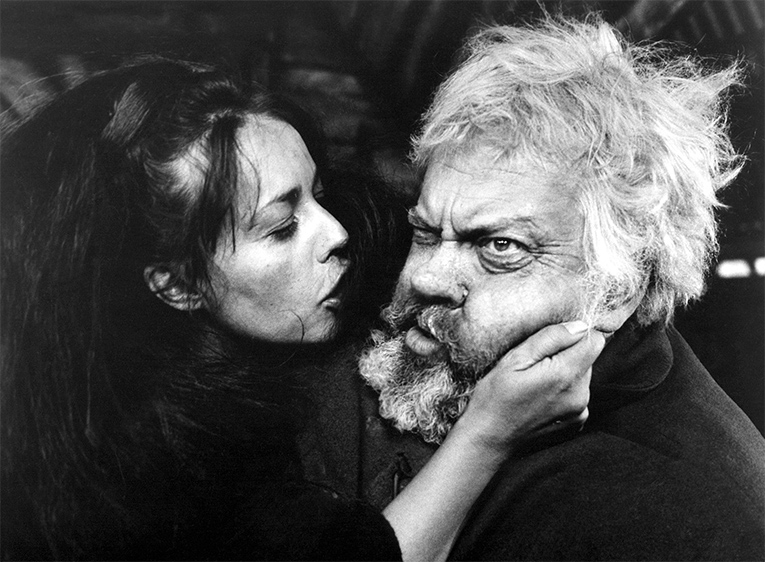 In terms of the video, Criterion had more to work with, and this Blu-ray accurately reproduces cinematographer Edmond Richard’s superb, high-contrast images. The scenes in the Boar’s Head Inn are crisp and sharply delineated, as are Falstaff’s close-ups, which catch every hair of his unruly beard, every pockmark in his bulbous nose -- and every nuance of Welles’s magnificent performance.

Criterion has provided a good set of extras. There’s a knowledgeable commentary by critic James Naremore, who has written extensively about Welles. Often his words are screen specific; at other times, they’re more general -- a comfortable mix. There are new interviews with Keith Baxter, actor Simon Callow, film historian Joseph McBride -- and Welles’s youngest daughter, Beatrice Welles, who plays a young page. There’s also a segment from The Merv Griffin Show in which Griffin interviews Welles at his editing console. This provides a lot of insight into Welles’s work and world. 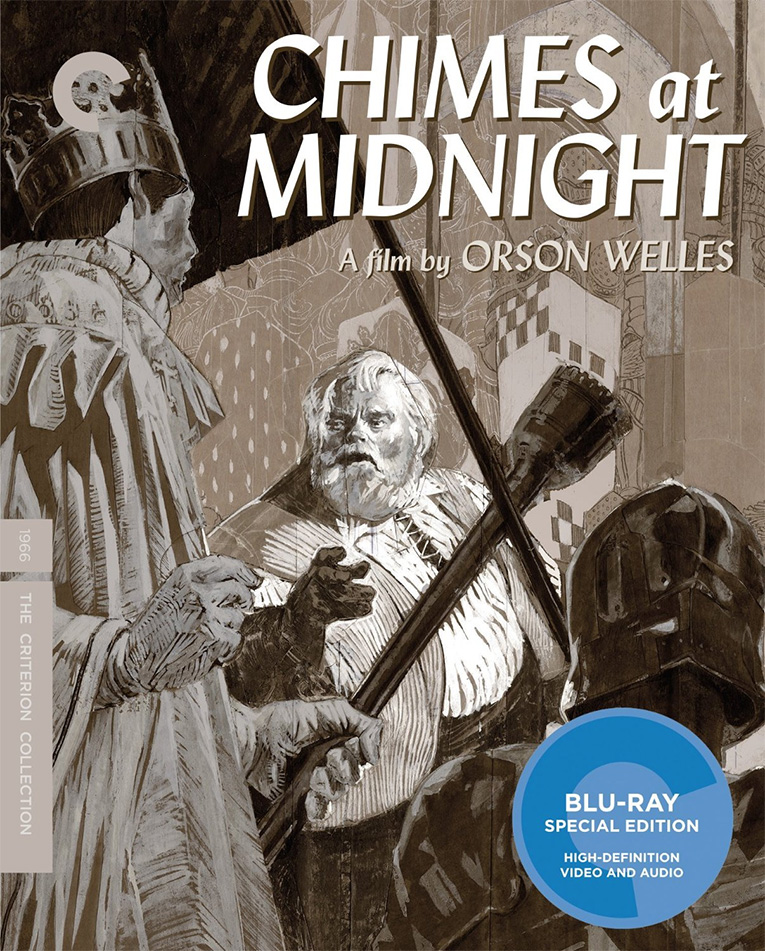 All in all, Chimes at Midnight is well worth seeing -- especially in this edition, which presents the film in better sight and sound than it has ever been accorded in the past. The acting from the entire cast is magnificent, and the camerawork is worth noting. You’ll need to fiddle with the sound to get the balances right, but once you have, you’ll be rewarded with some of the best Shakespeare ever filmed.

Be sure to watch for: A shot at the beginning of chapter 15 shows a row of horses ready for battle. As the knights lower their lances into position, the horses shoot steam from their nostrils -- you can sense that they’re ready to charge. This powerful shot is one you’ll remember.