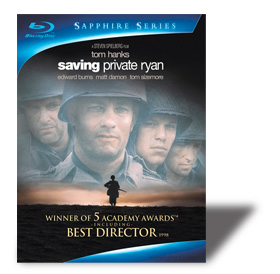 Almost everyone has seen this Academy Award–winning film by now. But for those who haven't, it tells the story of a division under the leadership of Captain Miller (Tom Hanks), small-town English teacher turned soldier. Miller is ordered to pick his best men for a mission to go behind enemy lines and rescue a young private (Matt Damon) so that he may be returned to his grieving mother, who has already lost her other three sons to the war. This epic movie sums up almost every other war film, and it emerges as one of the two or three best in its genre.

Saving Private Ryan has come to Blu-ray looking almost as good as you could hope. The colors seem true to life, unlike in the earlier DVD version. Spielberg's idea was to make the film -- particularly its opening sequence -- resemble newsreel footage. And every detail in the Blu-ray image is so clean and clear that the director's plan results in gripping, gritty footage that showcases the reality of war. I was particularly struck by the opening scene's rough water, which is so detailed that I felt immersed in the heady aroma of beach and ocean.

The film, which won the Academy Award for Best Sound, has been transferred to Blu-ray in perfect DTS-HD Master Audio 5.1. All of the channels are in use throughout almost the entire movie, yet there's never any clutter or coarseness. The dialogue is clear, and the surround effects contribute to the action up front without any missteps. John Williams's score is expertly mixed, never overshadowing dialogue but also not fading into the mix. The extras, which are on a separate disc, include a handful of intelligent production featurettes as well as a theatrical trailer and re-release trailer, both in HD. The most important extra, however, is a lengthy documentary on war photography, hosted by Tom Hanks.

Be sure to watch for: In chapter 9 the men take refuge at night in a bombed-out church, which is lit only by candles. There are many wonderful shadows in this scene, along with plenty of shadow detail. Faces are often lit only on one side, but the original photography is so excellent and the transfer so close to perfect that there's never any doubt as to who or what we're seeing.