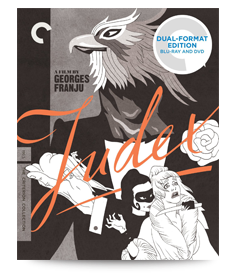 A Magical and Bizarre 1963 Homage to Silent Film

I first encountered the work of French director Georges Franju when I reviewed Eyes Without a Face (1960) last October. This month, along came Judex (1963), to shed more light on this man who liked to populate realistic settings with magical, often bizarre events.

Judex is, in a sense, a remake of a 1918 12-part silent film serial by Louis Feuillade. It's more a tribute to the earlier director than an imitation with sound. Though Franju's movie has a soundtrack, it reminds me of a silent film at times, as it has less dialogue than your usual movie.

Judex is about revenge. Disguised, Judex (Channing Pollock) has been working for a corrupt banker, Favraux (Michel Vitold), and has observed and despised his criminal activities firsthand. He dispatches Favraux in public to seeming death and then wakes him up in a laboratory he has fashioned out of an abandoned chateau. Judex informs Favraux that confinement for the rest of his life is a far greater punishment than death. Judex's lab houses a lot of gimmicks, including mysterious sliding doors and a retro television system whereby he can monitor his prisoner. Judex himself resembles Zorro, with the same sort of hat, a mask, and a swirling cape. The actual period of the movie is kept a secret. It's neither 1918 nor 1963, but seems somewhere in between.

Favraux has a daughter, Jacqueline (Édith Scob, a Franju regular), and evil forces kidnap and re-kidnap her in various chase situations. The main evil is Jacqueline's former governess, Diana Monti (Francine Bergé). This woman is surely one of the most charming and clever, wicked female assassins in the history of cinema. Sometimes she is dressed in tight-fitting black, a la Diana Rigg in The Avengers, and at one point she dresses as a nun. She ends up in the black cat suit battling acrobat Daisy (Sylva Koscina) on a rooftop. Since Daisy is dressed in white, it's seen as a classic battle between good and evil. 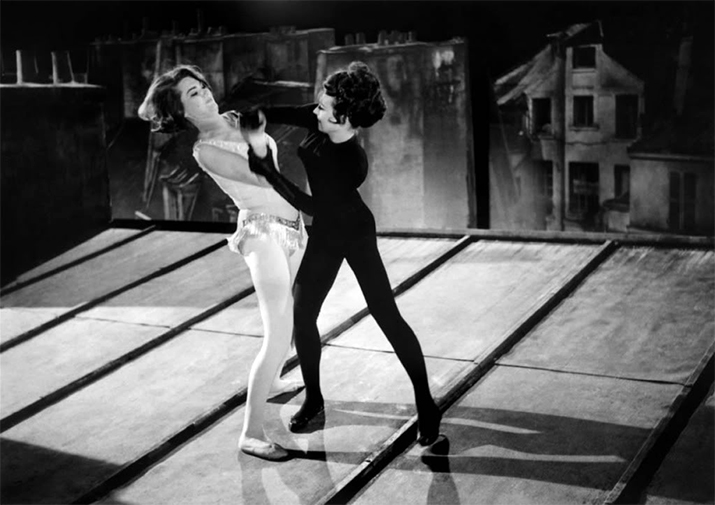 As fun as Judex is, I found one of the extras to be worth even more -- a film called Le grand Méliès, which is a short documentary honoring the great filmmaking pioneer Georges Méliès, who Franju knew at the end of the elder man's life. It's an affectionate and charming little film that stars Méliès's son as his father and also stars the actual Madame Méliès. If you've seen the wonderful Martin Scorsese film Hugo, Franju's movie opens and ends during that same period of Méliès's life, with flashbacks to his immensely successful younger days as a wizard of cinema.

In addition to this charmer, there's another very effective short film decrying war, with interviews with co-writer Jacques Champreux and actress Francine Bergé. There's also a 50-minute program on Franju in which he explains his love of black-and-white film and disdain for color. There are some scenes in this from Blood of the Beasts, Franju's documentary about a slaughterhouse. You might want to avert your eyes during those snippets, and be very grateful they are not in color.

Criterion has done its usual magic with black-and-white films. I doubt anyone ever saw such a pristine print in a theater. Judex has splendid focus and contrast, and the extra short films are better than average, too. The sound is good enough to hear Maurice Jarre's pithy music, the English subtitles are easy to read, and there's a 38-page booklet with a long essay by critic Geoffrey O'Brien, as well as some selected comments by Franju. 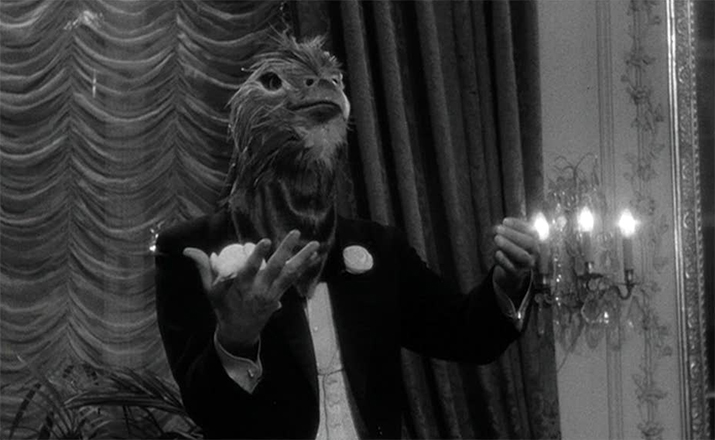 Be sure to watch for: The introduction of Judex is an amazing scene. We first see his shoes, and the camera pans up and up until we see he is wearing a grotesque bird's head. Judex picks up a supposedly dead pigeon and walks through a bizarre ballroom, startling dancers, many of whom are also wearing birds' heads or masks with beaks. He then proceeds to put on a magic show in which he not only brings the dead bird to life but also finds many others hidden in unusual places. No wonder American magician Channing Pollock was cast in the role. He was not much of an actor, but he was a superb illusionist, noted for this work with pigeons.