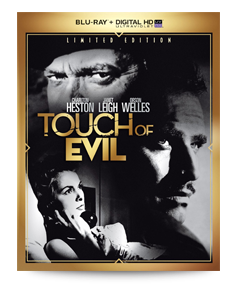 Has there ever been a sleazier cinematic heavy than Police Captain Hank Quinlan? As played by Orson Welles in Touch of Evil, Quinlan looks 100 pounds overweight, has several days' growth of scraggly beard, and wears clothes, especially an old overcoat, that look like they've been not only slept in, but eaten in as well. Add the raspy voicing and you have a character that you'd not even want to shake hands with. Add Welles directing himself (and everyone else), and you have genius at work.

Quinlan has friends and associates, though perhaps largely for political reasons. Most people are impressed with Quinlan's cleverness because he solves cases based on hunches and miraculously found evidence. We find out later that he's been planting that evidence. 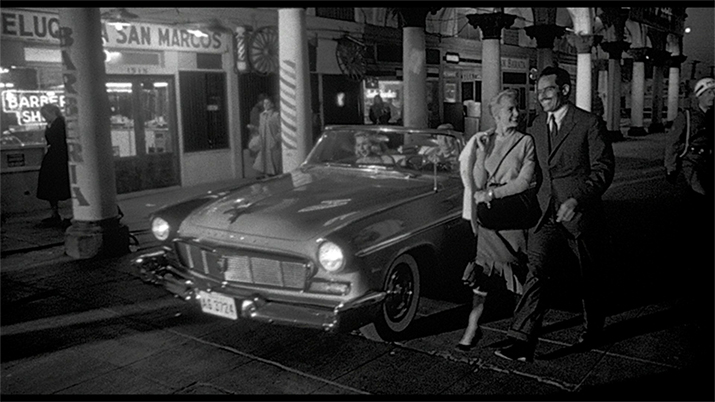 In the often admired three-and-a-half-minute crane shot at the beginning of the picture, we meet Mexican narcotics officer Mike Vargas (Charlton Heston) and his new wife, Susan (Janet Leigh), as they walk along the street of a border town between the USA and Mexico. In the initial opening shot we see a bomb planted in the trunk of a car, and that car pulls past the Vargas couple and off screen left. At the moment Mike and Susan kiss, we hear the expected explosion and are then thrust into visuals of it. Quinlan pulls up, and that's when he and Vargas meet and develop an instant dislike for each other. Still, they must work together on the case.

At this point the film splits into two story lines: one following Vargas and another following his wife, Susan. Vargas gets deeper and deeper into Quinlan's treachery while investigating the explosion, and Susan is terrorized and set up by hot-rod motorist youths working with the Grandi crime family (including an unbilled and very scary Mercedes McCambridge). The plots converge as Vargas attempts to get evidence that will put Quinlan in jail.

The fact that there are many uncredited performances in this movie speaks to the actors' love of Welles and his directing. Many Welles regulars show up. Joseph Cotten appears as the coroner (the first time with voice dubbed by Welles, the second time with his own voice), and Ray Collins is on hand as the district attorney. Marlene Dietrich was to have been unbilled, but when Universal execs discovered that she was being filmed, they put her on the payroll and in the credits. Dietrich plays the gypsy Zita, and her presence adds much to the film. All you need to do is see her in close-up, and her charisma fairly leaps off the screen. And in Touch of Evil, she also gets the last word.

Dennis Weaver is credited as the motel's night manager, and he turns in a magnificent, loopy performance that these days would have him nominated for a Best Supporting Actor Oscar. Joseph Calleia is outstanding as Pete Menzies, the only character in the film who has a real catharsis, and Akim Tamiroff scores as "Uncle" Joe Grandi, part of a very large drug syndicate.

The look of Touch of Evil is always innovative. Welles used quite a bit of handheld camera work and a number of crane shots. He also often shot the actors from below, giving them something of a stage presence, and used wide-angle lenses to great effect. He shot one of the first car excursions without back projection by strapping a camera on the hood of a car and letting Charlton Heston work the on-and-off switch. 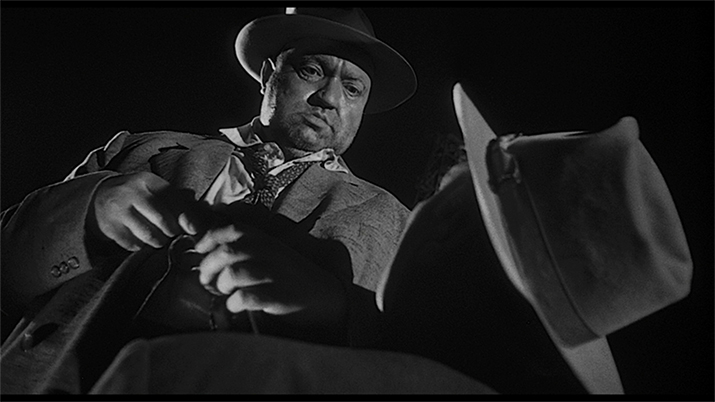 Touch of Evil was released in 1958 at 96 minutes. Welles had seen this cut and wrote (without taking notes, so the story goes) a 58-page memo to the studio with his suggestions. Universal took a few of these and created a preview version that was 109 minutes long. In 1998, filmmaker Rick Schmidlin produced a restored version that tried to use all of the memo's suggestions. It came in at 111 minutes. The shorter version had also posed problems in understanding the plot of the movie. Both other versions caused critics and audiences to re-evaluate it as the masterpiece it is.

All three versions are on this Blu-ray. The only other instances I can think of where there are three versions on a single Blu-ray are Close Encounters of the Third Kind and Avatar -- wonderful uses of Blu-ray technology. All three versions of Touch of Evil have digitally restored video for a black-and-white picture (presented in 1.85 aspect ratio) that has super sharpness and dramatic contrast. The sound is different for each version, as Welles wanted source music for the most part and used very little underscore music. Each version, though sounding different, sounds terrific in this Blu-ray.

Since there are three versions of the movie, there are four commentaries, the reconstructed version getting two: one with Rick Schmidlin and one with Charlton Heston, Janet Leigh, and Schmidlin. The original release version gets a fun and factual commentary by writer/filmmaker F. X. Feeney. The preview version receives an in-depth commentary by Welles historians Jonathan Rosenbaum and James Naremore. In addition to the fabulous array of commentaries, there are two featurettes, "Bringing Evil to Life" and "Evil Lost and Found." Perhaps the most important extra is a booklet containing the entire 58-page memo that Welles wrote to Universal.

Don't miss this Blu-ray. Celebrate the genius of Orson Welles and you'll be well rewarded. Universal should be applauded for this special Blu-ray edition as well as the recent one for Double Indemnity. I hope they sell a bazillion copies and are encouraged to give the same loving care to other Universal classics in the vault.

Be sure to watch for: That opening three-and-a-half-minute crane shot is a masterpiece. In the 1958 version it was presented with a jazzy underscore by Henry Mancini and cast credits on screen, but in the reconstructed version, Welles's wish to have source music from car radios, cantinas, and brothels was honored, and there are no credits onscreen. I like both versions. How great to have them in one place.