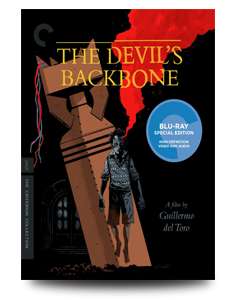 Most moviegoers know Guillermo del Toro's Pan's Labyrinth (2006), which won three Academy Awards and was nominated for three additional ones. The Devil's Backbone, from 2001, is considered a twin to Pan's Labyrinth, but it is not generally known to American audiences, no doubt because its screening at the Canadian International Film Festival was right before the September 11 attacks on the World Trade Center. Immediately after that catastrophic event, film producers were soft-pedaling any releases that contained violence.

Since The Devil's Backbone takes place in the waning days of the Spanish Civil War, it qualified to be ignored. Critics knew of its worth, however, and positive reviews propelled del Toro's career forward to the point that he could make larger-budget films such as Pan's Labyrinth, Hellboy, and its sequel. This summer has seen him graduate to an even bigger-budget blockbuster, Pacific Rim.

Pacific Rim’s battling robots are a long way from a boy, a ghost, and an isolated orphanage, and I am not sure that del Toro has made anything more significant, just louder and busier. To my mind, The Devil's Backbone is his very finest work, even more so than Pan's Labyrinth, and Criterion is to be lauded for making it available in all its nonexcessively gory glory. Now everyone can experience its power.

The story focuses on Carlos (Fernando Tielve), a small boy who is dropped off at an orphanage in the middle of nowhere. The decrepit stone building stands in the center of acres of wasteland. We perceive that it has come on hard times due to the war. It has a handful of orphans as residents, one principal/teacher, one doctor, another teacher, and two hired servants (a young man and woman, both attractive and in a relationship of sorts). Jacinto, the young man (Eduardo Noriega), was a resident earlier in his life as an orphan, and he knows that the principal has gold bars that she gives to the resistance to pay for weapons.

Carlos immediately meets the young ghost of the orphanage, Santi (Junio Valverde). At first we're not sure whether Santi is a good or bad ghost, since he mutters things about a lot of people dying. Suspense builds until Jacinto proves to be the catalyst to a holocaust.

I can't tell you more without spoiling your enjoyment. The movie is a Spanish take on gothic novels, and it presents ghosts as being frozen in time. Therefore, almost everything in the film is contained. The arches of the building lock people in, while the courtyard contains a bomb that never exploded. Embryos are enshrined in bottles and provide the link to the film's title, as one of them exhibits spina bifida, the devil's backbone.

Del Toro works in earth tones, rust tones, and nighttime blues and dirty whites. The palette is limited but rich. Reds are saved for blood, most notably the plume that exits from Santi's head, more beautiful than horrible in effect. Del Toro and his cameraman Guillermo Navarro supervised the transfer with astonishing results. More than once, you'll want to gasp at the beauty onscreen, even as you squirm at the uncertainty and horror lying underneath those beautiful surface images. The movie already had a 5.1 soundtrack, which Criterion has transferred to DTS-HD Master Audio. The soundtrack is a subtle mix, which encompasses everything from low-frequency groans and midrange whispers to little atmospheric sounds surrounding the listener, and it helps to create an uneasy and ominous feeling.

Criterion has provided a handsome set of extras, most of them involving del Toro, who is an eloquent conversationalist. He also provides the commentary as well as a short introduction. There are a host of contemporary and period interviews with him, as well as a 2004 making-of documentary. There's a very interesting interview with scholar Sebastian Faber, who discusses the film's depiction of the Spanish Civil War. Then there are slews of storyboards and sketches -- you can even watch a screen-in-screen presentation of storyboard images as the movie plays.

The Devil's Backbone is a true ghost story in which living humans create most of the violence. Its characters are sharply drawn, and every part is superbly acted, from the old doctor down to the smallest boy. With atmosphere to burn, it's one of the finest ghost stories ever filmed, and it's well worth your attention.

Be sure to watch for: Chapter 7 starts with a bluish-and-black view of the orphans' sleeping hall. The view offers perfect contrast, and the Blu-ray's ability to display detail in the far corners of the hall gives the picture great depth. But that's just one; this film is full of memorable images almost anywhere you look. Oh yes, be sure to check out that Criterion catalog number. Not a coincidence, I bet.