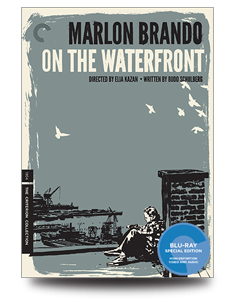 No Matter What the Aspect Ratio, Brando's Performance Towers

The Criterion Collection has consistently brought us the best extras to contribute to a fuller enjoyment of its feature films. But for On the Waterfront, the company has outdone itself, bringing us three different versions of the movie. To clarify, it’s exactly the same cut presented in three different aspect ratios: 1.66:1 on the main Blu-ray Disc, and 1.33:1 and 1.85:1 on a second Blu-ray.

On the Waterfront was released in 1954, when movie attendance was down due to the popularity of television. The film industry had to come up with different tricks to attract an audience. Fox chose CinemaScope, with its exceptionally wide aspect ratio, whereas Cinerama used three projectors for an even wider screen experience. Columbia, which released On the Waterfront, took a more conservative view, shooting its movies so that a projectionist could mask-off the lens for either 1.33:1, 1.66:1, or the wide 1.85:1. As you might expect from The Criterion Collection, there is an extra discussing and demonstrating the different aspect ratios, but Criterion's generosity in including the complete movie in each of the three aspect ratios has to be a first. In the past the audience was at the mercy of the projectionist. Criterion lets them decide for themselves.

No matter what aspect ratio you choose, you'll see the best film of Elia Kazan's extensive career and, to my mind, the best performance from the greatest actor the screen has ever known. Marlon Brando was at the middle of a jaw-dropping four-year run of A-plus performances: The Men (1950), A Streetcar Named Desire (1951), Viva Zapata! (1952), Julius Caesar (1953), The Wild One (1953), and On the Waterfront (1954). In On the Waterfront he plays Terry Malloy, a New York City dockworker and broken former prize fighter who becomes a reluctant hero when he decides to testify against the corrupt leaders of his union.

Though Brando towers above everyone, the rest of the performers are superb, a case of pitting A-plus against A. Eva Marie Saint made her feature-film debut in On the Waterfront, and she's totally appealing and convincing as the conflicted Edie Doyle, who falls in love with Terry before realizing he was instrumental in her brother's death. Rod Steiger impresses as Charley Malloy, Terry's brother who has sold him out, and Karl Malden seems born to play the role of Father Pete Barry, based in no small part on the real-life Father John Corridan. As Johnny Friendly, based on real-life boss Joseph P. Ryan, Lee J. Cobb makes his character one of the most memorable villains in film history.

At the helm of this magnificent cast was Elia Kazan, and On the Waterfront put him back in the Hollywood spotlight. Kazan won an Oscar for his efforts, as did Brando (Bette Davis is here enthusiastically presenting his award) and Eva Marie Saint. The film won Best Picture, and its near-perfect Budd Schulberg script won Best Screenplay. Surprisingly, Leonard Bernstein's score, almost a character in the film, did not win, but Criterion includes a 20-minute extra about it. In retrospect one has to ask, What were they thinking?

There are many other extras, including an hour-long documentary on Kazan, reminiscences from Eva Marie Saint, an intelligent and entertaining discussion by author James T. Fisher about the real events that inspired the movie, and more, including a duo commentary by film history authors Richard Schickel and Jeff Young.

The transfers are first rate, too. The video transfer presents a starkly contrasted black-and-white image that perfectly suits the film. There are no artifacts that I could see, but the movie is fairly grainy so you might want to shut down any video-enhancement circuitry or gadgets you have in your video loop. (This is definitely not a movie for the Darbee Darblet!) The audio is presented two ways (for all three aspect-ratio versions): a cleaned-up, uncompressed mono original and a DTS-HD Master Audio 5.1 track, which opens up Bernstein's music without messing around with the crisp dialogue track. Being a fan of Bernstein's score, I must confess I preferred this one.

But no matter what aspect ratio or what soundtrack version you pick, don't miss this release. Did I make that emphatic enough? This is one you simply have to see.

Be sure to watch for: Chapter 19, the scene with the two Malloy brothers in the taxicab, is one of the greatest in all of American cinema. In its compact length it contains enough genuine pathos for ten regular movies. There's a 25-minute extra devoted entirely to this scene. Again, a must-see.