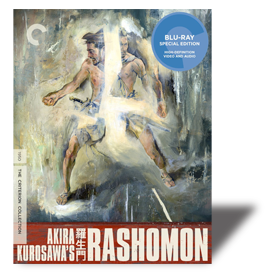 There's little disagreement that Rashomon is one of Akira Kurosawa's greatest films, and there's sure to be a consensus that the great Japanese director's masterpiece has never looked better than it does on this Criterion Blu-ray Disc. I found it near astonishing at times, as copies I had seen before were riddled with noise and looked fairly washed out as far as contrast goes. This Criterion release blows them all away, even their own earlier DVD version.

At the heart of this release is a 2008 restoration of the film produced by the Academy Film Archive in association with Kadokawa Culture Promotion Foundation and the Film Foundation. As usual, the extensive notes on the transfer tell the rest of the film-to-disc story in great detail. The sound was also restored, and it's presented in an uncompressed monaural track.

The story still intrigues. In 11th-century Japan, three travelers arrive at the ruined Rashomon gate, which guards the southern entrance into Kyoto. It's raining torrents, so to pass the time and stay dry they begin to talk about a recent rape and murder, and it happens that two of them were witnesses and were questioned by the local authorities. Through their flashbacks we meet more characters who tell the story, and each narrative contains serious differences. Kurosawa, who based his screenplay on two stories by Ryunosuke Akutagawa, questions reality at every turn.

Rashomon was instrumental in bringing the Japanese actor Toshiro Mifune to prominence. This great star plays the bandit Tajômaru, who may or may not have killed samurai Takehiro Kanazawa (Masayuki Mori) and raped his wife, Masako Kanazawa (Machiko Kyô). It's almost an acting course to watch how Mifune shades his character for each different telling of the story -- heroic in one, playful in another.

Criterion once again shows us what extras should be -- items that increase our knowledge and enjoyment of the film. The audio commentary by Japanese film historian Donald Richie is exemplary. Richie is always screen-specific with his commentary, and he never wanders about discussing other aspects of Kurosawa. Even though it's apparent that he knows plenty, he sticks to Rashomon and provides valuable knowledge in an entertaining manner.

The booklet included with the disc has an article by Kurosawa on the filming of his movie, and it also includes the two short stories on which the film is based. The commentary and booklet would be enough, but Criterion has provided more relevant interviews and featurettes. All are much more interesting than the back-patting production featurettes we usually get from Hollywood.

Rashomon is a "classic," but don't let that word stop you from watching it. It's very entertaining and not at all dry or stuffy. Criterion has provided transfers and extra material that make viewing this 62-year-old movie a very "now" experience.

Be sure to watch for: Everyone has applauded Kurosawa's forest photography by noting his shots into the sun above the tree canopy, as well as the shadows created as the sun filters through branches. These effects are at their best in chapter 4. Tajômaru is sitting under a tree, and in close-up the forest shadows dance over his scraggily bearded face. Blu-ray conveys all of the delicate detail.