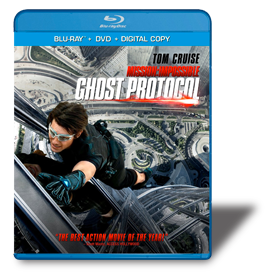 Everything Falls into Place for the Best Mission Yet

The Mission: Impossible franchise, in which Tom Cruise has served as both star and producer, has had its up and downs. Each film has had a different high-profile director, with Brian De Palma, John Woo, and J.J. Abrams helming the first three. For number four we have Brad Bird, and everything has finally clicked. But wait, you might have said (and might still if you didn't see this movie last summer in a theater), doesn't Brad Bird direct cartoons? Well, yes, he has directed some of Pixar Animation Studios' best movies, and this is his first live-action film. Then again, one of those animated features, The Incredibles, is one of the best action-adventure flicks of all time. It just happens to be animated.

With Bird on board and Cruise totally involved as usual, Mission: Impossible -- Ghost Protocol is an action movie that works on all levels. It has big set pieces featuring seemingly impossible daredevil stunts, tension and suspense, exotic locations, and an intense hand-to-hand fight for a finale. In its scope and precision it reminded me a bit of a Bond movie without all the froth, or a Bourne movie with a larger budget.

The plot is simple yet detailed. The team is trying to stop a madman from obtaining codes that will let him hijack a satellite and fire deadly missiles that will rid the earth (in his mind) of pesky human beings. Cruise once again plays Ethan Hunt, and his dynamic team consists of beautiful Jane Carter (Paula Patton), computer geek Benji Dunn (Simon Pegg), and William Brandt (Jeremy Renner). Pegg, who often adds levity at just the right moment, seems set to play for a while in this franchise as well as another one, Star Trek, in which he plays Scotty. The focus in Mission: Impossible -- Ghost Protocol is on Cruise, who certainly earns it with an impassioned, committed, and athletic performance, but Pegg also deserves special mention, as do Patton and Renner.

This movie was a huge hit on the big screen, and it's pretty magnificent on home video. Last week I saw War Horse, which was acclaimed as a demonstration disc, and this one's just about as good, with perhaps better video. Only a few soft interiors knock a half star off the picture rating, but most of the time, especially in outdoor scenes and flyover shots, the picture is incredibly sharp and clear. The sound is big with lots of things going on in the surrounds, though there are suspenseful moments where silence creates tension that's peppered with edgy noises. As a whole, the soundtrack is entirely appropriate for whatever scene it accompanies, as is the score by Michael Giacchino. Everything in this film works together hand in glove.

The extras are contained on a second Blu-ray Disc and divided into several categories: "Mission Accepted" (three featurettes about daily filming and SFX); "Impossible Missions" (shorter featurettes on various aspects of filming, including one on Giacchino and the music); and deleted scenes (with commentary from Bird). There's also a theatrical trailer.

If you have a big screen and a taste for action-adventure films, this Blu-ray is a must to own or rent. It will likely lose a lot on a small screen, so try to see it on a large one -- it's one of the best action films to come along in several years. Your mission, should you choose to accept it: watch it and enjoy.

Be sure to watch for: In chapter 2, during the first big attempted heist of the movie, Carter is in a brick tunnel with a flashlight. Notice the detail of the bricks, the shadow detail, and the contrast, which are all A-plus. This ought to be a good scene for checking your system's resolution and contrast.