"Lady and the Tramp: Diamond Edition" 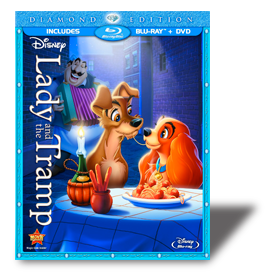 Lady and the Tramp, Walt Disney's homage to canine friends and a time gone by, actually started with some thoughts in the late '30s and went through many reworkings before its CinemaScope release in 1955. The history of the movie's development unfolds in the very interesting "Classic DVD Bonus Features," which are included on this Blu-ray/DVD set. (I reviewed the two-disc package, but there's also a three-disc set that includes a digital copy.) The master animators and score composer Oliver Wallace made the film breathe the last days of the horse and buggy in Middle America, while Peggy Lee's saucy songs and performances made the movie zing for contemporary audiences. The story appeals to both adults and children, as it flawlessly walks a narrow line in portraying death, pregnancy, and a night of passion. Those ideas might fly over the heads of youngsters, but they'll resonate with older viewers.

We all expect great things from a Disney Blu-ray Diamond Edition, and this one doesn't disappoint. Its picture is perfect. Colors pop, backgrounds have texture and detail not readily visible with DVD editions, the print is undamaged and free of artifacts, and the contrast is spot on for both day and nighttime scenes. The soundtrack is presented in both 7.1 and the original 3.0 version, and both sound better than any past presentation of this movie. The iconic spaghetti scene between Tramp and Lady looks and sounds so wonderful that you'll fall in love with it all over again.

Lady and the Tramp's animation is so smooth and fluid that parents could show it to children as a new film and they might not be any the wiser. They might even have a hard time believing that the whole thing was done without a computer. I find it thoroughly amazing myself.

There are some new extras for the Blu-ray, including a trio of deleted scenes. One of these is from a much earlier time when Lady was supposed to have two neighboring dogs vying for her attention, one a snobbish Russian wolfhound named Boris. Another scene is somewhat bizarre. Tramp cajoles Lady into a vaudeville show starring trained dogs, and Lady gets stuck on the stage with a Parisian chorus line of poodles doing the can-can. The creators were surely right to throw this scene out. It would have been totally jarring within the film, but it's fascinating as an extra. None of the deleted scenes are available in motion; they're all displayed with character and storyboard drawings and accompanied by suitable music and narration.

Lady and the Tramp is a timeless film, especially in this Blu-ray edition, which presents it in an immaculate transfer and augments it with some excellent extras that offer an entertaining exploration of the movie's history.

Be sure to watch for: Chapter 4, in which we meet Tramp, is exceptionally evocative. Tramp is sleeping inside a turned-over barrel, and as he wakes, he yawns and stretches just like a real dog. It looks like it feels so darned satisfying that we can't help feeling good about it. Without a single word of dialogue, Tramp's good-natured, carefree character is established.