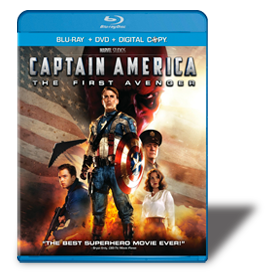 The Best Superhero Movie Yet!

I was skinny as a kid, and I always related to those bodybuilding ads where a big bully kicks sand in the little guy's face. Of course, in the ad the kid buys Charles Atlas's bodybuilding products and becomes a big bully himself. I tried to gain weight, drinking a milkshake every day with an egg in it and eating lots of food, but I didn't gain an ounce. Watching this film brought back a lot those memories and let me know that what I needed all along was Dr. Abraham Erskine (the always wonderful Stanley Tucci) and his explosive serum, which does wonders for Steve Rogers (Chris Evans) in this movie. Rogers is a skinny kid (probably 110 pounds dripping wet) who, at the height of World War II, wants to sign up for the army. He signs up at different recruiting centers but is always rejected.

That all changes when Rogers meets Dr. Erskine, who admires the young man's persistence and rewards Steve by picking him as the subject of an experiment. To make things short, Steve gets a shot of the serum and becomes Captain America, a hunky all-American hero. While Steve's story is unfolding, over in Germany Johann Schmidt, an evil Nazi military officer, is finding a substance that turns him into Red Skull, one of the baddest-assed villains in movies. It's inevitable that good should meet evil in a standoff, with the future of the world hanging in the balance. The way to the final battle is full of thrilling fights, escapes, chases, and a glimmer of romance.

Captain America succeeds, both as a character and a man, because he's forthright and true. You'd never catch him in a lie or find him smoking a cigarette; he's totally for good. He resembles Superman in those qualities, though he lacks Superman's supernatural powers. The transformation makes Captain America strong and agile; he can jump far and run fast, but he can't see through walls or stop a speeding bullet without his shield. As a comic book character, Captain America was a hero for Americans dealing with the nightmares of World War II, and he still emerges as the kind of leader we painfully need to believe in today. The movie is delightfully retro; you'll feel placed firmly in the 1940s, and all of the fantastic machines and contraptions could have been made only with the imagination of that age. Take, for instance, the massive flying-wing bomber, which is powered by multiple props rather than jet propulsion. And Captain America's round American-flag shield is made of material that simply can't be breached. It's used in a number of ways and becomes an iconic trademark for Rogers.

The filmmakers used a fairly heavy filter when shooting in order to achieve a sort of sepia Technicolor effect. This technique, which is faithfully conveyed on the Blu-ray, doesn't affect the reds and whites so much, but it makes the overall film seem like a period piece from World War II. The soundtrack is more modern with a 7.1 DTS-HD Master Audio mix that's one of the best of the year. It's very transparent, allowing every detail to be heard, but it kicks butt when it needs too (use duct tape to hold down your valuable collectibles). Alan Silvestri's heroic music score gets mixed at just the right levels.

The extras continue the upbeat nature of the movie. There's a zippy, entertaining commentary track with director Joe Johnston, director of photography Shelly Johnson, and editor Jeffrey Ford, and there are some very good featurettes dealing with different aspects of the production, along with a few surprises.

Marvel superheroes have done well recently. We've had excellent movies about Iron Man and Thor, and only The Green Lantern failed, falling on its green face with a disastrous thud. Marvel's next ploy is to join its most important superheroes together for The Avengers, due in May of 2012. Fans are eagerly anticipating the film's release, and if it delivers as much excitement as Thor or Captain America: The First Avenger, the wait will have been worthwhile!

Be sure to watch for: There are a lot of eye-popping images in the movie itself, but in the first extra featurette, which is about the making of Captain America's terrific costume, there are some shots of the original comic book pages what will drop your jaw.