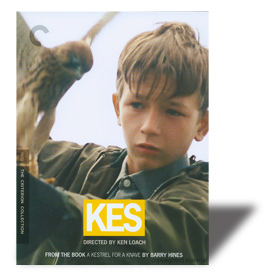 Since the fare here has been heavily weighted to superhero and SFX films for the past month, let's turn attention to dramas for a bit. Kes (1969) was the first big hit for director Ken Loach, and it remains one of the most lyrical expressions of social injustice ever committed to film. On the surface it's a touching, sometimes humorous, sometimes sad movie about a young boy who finds a young kestrel and trains it to fly and return to his gloved hand. The main theme, however, is about an educational system that dead-ends creative children and parcels them out as unskilled laborers. Most of Loach's films portray the poorer classes in England in a very personal and realistic manner, and Kes follows suit, exploring the coal miners and laborers of the northern part of the country.

Billy (David Bradley) lives with his mother and brother in a house so small that the two siblings must share a bed. Brother Jud (Freddie Fletcher) works in the coal mines, and it's assumed that Billy will leave school early to do the same. At a show-and-tell in English class, Billy talks about training Kes. His eyes light up and he becomes galvanized and magnetic, so much so that we can sense that given a chance, this young boy could go on to be a success at whatever he chooses. But in a later scene we see Billy with a job-placement officer, who asks the boy what kind of work he'd like. Billy can't come up with an idea because the adults in his life, his English teacher (Colin Welland) excepted, have drilled into his head the idea that there's no chance for advancement. Billy has been trained for failure.

Loach believes in casting people who've had some experience with a script's subject matter. For Kes, he picked his cast of non-actors right out of a school and community in Yorkshire. Natural, affable, and authentic, Bradley is remarkable as Billy. The part of Kes was cast with three kestrels, and Bradley actually trained one of the birds so it would come to him. Today this might be done as a digital effect, and it probably wouldn't be nearly as effective as this pre-digital effort. The scenes of Kes in flight are thrilling and lyrical in a very realistic way.

But Kes is no Hollywood "boy and his hawk" movie. Though it has some funny spots, it's a gritty look at life that doesn't guarantee a Technicolor happy ending, and Loach filmed it in a somewhat grainy manner to underscore its true-to-life sincerity. Criterion has gone to great lengths to restore the movie (there's almost a whole page in the booklet describing the sources and difficulties), and since Loach is listed as one of the telecine supervisors, the result must be considered accurate. There are two soundtrack choices. One is the original director's version, which has Yorkshire accents so thick you might have to flip on the English subtitles. I did. The second track was created at the request of MGM/UA, the American distributor, and has the actors looping their dialogue over in an effort to make it more intelligible. Both tracks are monaural and do a decent job of reproducing John Cameron's intimate, small-scaled music score.

The extras include a 45-minute "making of" featurette with Loach and his long-time producer Tony Garnett, a segment of "The Southbank Show" devoted to Loach and his work through 1993, and the full-length black-and-white television film, Cathy Come Home, which decries the plight of the homeless in England and how government intervention broke up families and made the situation even worse than it was. By all means rent Kes; it's a beautiful and socially important movie, but it makes its point so firmly that you might not want to view it a second time. Watch and you'll understand. Thanks to Criterion for making it available in such a finely crafted edition.

Be sure to watch for: Chapter 13 shows Jud on his way to work, walking through muted green fields and forests. And then there's the monolithic coal mine, rising like a monster out of the woods. It's a visually arresting contrast of fleeting hope dashed by inevitable despair.