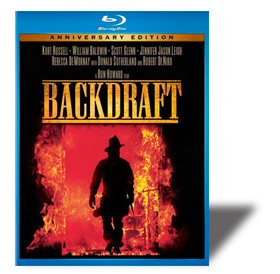 Though the cast listing is strong, with Kurt Russell, William Baldwin, Scott Glenn, Jennifer Jason Leigh, Rebecca De Mornay, Donald Sutherland, and Robert De Niro as headliners, the real star of this action film is fire. The human cast does as well as could be expected acting out the somewhat shopworn story of sibling rivalry in the Chicago Fire Department ranks, but it's when the guys go out to meet their adversary that things really pop and sizzle. The fire department personifies fire, and director Ron Howard follows suit.

The Blu-ray edition of the 1991 movie is welcome, then, not so much as a dramatic film, but as a movie that can provide some very good demonstration-quality material for a state-of-the-art home-theater system. The picture is finely detailed and rich in color. The special-effects team went to great lengths to get the color of fire exactly right, and their success is carried over to the Blu-ray, where the flames are never too red or too orange, but are just right. To make sure, we're given the bright, deep red of the fire engines as a contrasting measuring stick. I can’t say if this is a new video master or the same one used for the previously released HD DVD, but I'd guess the latter, as that one looked very fine and I can't see any difference here.

The sound for the HD DVD was only Dolby Digital Plus, whereas here it's DTS-HD Master Audio, which makes a noticeable difference. The sound in the firefighting scenes is downright terrifying, surrounding the viewer with rushing and crackling sounds, peppered with explosions and the groaning and whistling of structures as they die. Fortunately, I've never been in the middle of a burning building, but I can imagine that this is very much the way things sound, and I hope I never get to experience that sound firsthand. This Blu-ray is quite close enough!

The extras on the disc are the same as on the HD DVD, with one exception. This new Blu-ray sports a limited picture-in-picture feature called "Scene Companion," which enhances your experience by showing pertinent behind-the-scenes footage and interviews.

Backdraft isn't a bad movie; if you've never seen it, this Blu-ray is worth renting. But as a demonstration disc, it's worth a lot more, especially if you own a high-end system that can fully reproduce it.

Be sure to watch for: Chapter 7 begins with the team arriving at a fire in an apartment building. The contrast between the shiny-red fire engines, the flat-red bricks, and the fire is impressive, as is the detail when the hose team applies cascading water to the blaze.