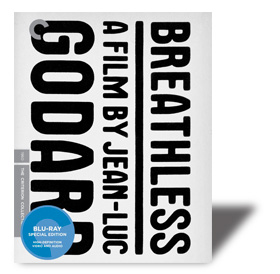 Jean-Luc Godard’s Breathless is often credited as the movie that changed cinema and solidified the French New Wave. Some will say there’s before Breathless and after Breathless. I remember seeing it when it first came out in 1960, and it seemed fresh, alive, and daring -- it was filmmaking unfettered by convention. Amazingly, it still feels that way today. Unlike many movies from that period, Breathless doesn’t seem dated. This is partially due to the timeless themes involved, but credit must also go to the effervescent performances of Jean-Paul Belmondo and Jean Seberg.

Belmondo plays wannabe gangster Michel Poiccard, and Seberg plays Patricia Franchini, a young American girl working for an American newspaper in Paris. Poiccard is on the lam for killing a policeman and wants Patricia to escape with him, but she won’t budge. Spoiler alert: she rats him out and he’s caught. The plot is about that simple, but its characters are complex. Poiccard is a rounder but has such charisma that we can’t help liking him. Patricia is young and naive on the surface, but her subtle expressions indicate that there’s a lot going on underneath her gamine exterior. The bulk of the film is concerned with the two talking to each other, all while Poiccard is trying to avoid the police. The plot seems slight, but Breathless is a movie where style becomes substance.

Criterion’s Blu-ray transfer is at the original aspect ratio of 1.33:1. As usual with Criterion, the black-and-white images are exceptionally clean and crisp. Contrast is fairly high and helps to highlight detail. The monaural soundtrack has been remastered, allowing every bit of dialogue to be heard clearly while providing enough dynamic range that Martial Solal’s jazzy music score has lots of punch. The movie is in French, with English subtitles that are easy to read unless there’s white at the bottom of the picture.

The extras provide valuable information that enhances the viewer’s enjoyment of the movie. There are archival interviews with Godard, Belmondo, Seberg, and Jean-Pierre Melville, the French New Wave director credited with starting the movement. There are some excellent featurettes, including a portrait of Jean Seberg that traces her career from age 17 to her tragic suicide at just 41. An 80-minute French documentary studies the making of the film and its shooting locations, and there’s a very good print of Godard’s 1959 short film, Charlotte et son Jules, the first meeting of Belmondo and Godard.

Breathless is an undeniably important film in the history of cinema. It paved the way for the use of techniques that are now commonplace, but, far from being dry film history, it’s a very appealing and entertaining movie that gets better with time. Criterion has put it on Blu-ray Disc with care and attention to detail.

Be sure to watch for: A little bit into chapter 15, Seberg puts a l’Oiseau-Lyre recording of Mozart’s clarinet concerto on a turntable. The camera stays with that image for a long time. The vinyl is so detailed and realistic that I suddenly remembered not only the sound of those wonderful old discs but their aroma as well.