The Parallax View (1974) is the second of what has been called director Alan J. Pakula’s Paranoia Trilogy, bracketed by Klute (1971) and All the President’s Men (1976). Although each film deals with a conspiracy, only the last is based on historical events.

In The Parallax View, a US Senator is assassinated in Seattle’s Space Needle on Independence Day. Three years later, when too many witnesses to the murder have turned up dead in alleged accidents and fearful she might be next, TV news reporter Lee Carter (Paula Prentiss) arrives at the apartment of newspaperman Joseph Frady (Warren Beatty) to tell him what she’s discovered. When Carter, too, dies soon afterward, Frady begins to reinvestigate the murder, even though a government commission has ruled it the work of a lone assassin.

Posing as an assassin himself, Frady discovers and infiltrates a group, the Parallax Corporation. The film is more thriller than political, and Parallax’s motives and membership remain secrets. All we know, as Frady discovers, is that the Corporation has incredible power and can shape the results of elections and the destinies of entire governments.

According to the supplemental materials included in this Criterion Collection edition, The Parallax View was cobbled together during a writers’ strike, with new material written daily. The cinematographer, the late Gordon Willis (1931-2014), compensated by shooting all close-ups at the same distance and camera settings. Willis, noted for his penchant for darkly lit scenes, here seesaws between deep shadows and bright lighting. At the beginning, exterior shots of the July Fourth festivities, bright with candy-store colors, alternate with richly patterned sequences of light and shadow as the assassination takes place inside the Space Needle.

Willis gives a fairly thorough discussion of his work in a video interview included here, and Criterion’s detailed transfer has done full justice to his vision. Bright colors pop off the screen, while darker scenes draw one in. The detail is sharp, and the color saturation of this Technicolor production is perfect. (I wince to think how horribly the reds were handled in earlier video transfers.) The soundtrack, too, has received a good transfer. Michael Small’s score is quite effective at building tension. He’s particularly good at composing an original theme you’d swear you’ve heard before, and subjecting it to minor-key variations and dissonances that add to the film’s increasingly, eerie, unsettling atmosphere. These nuances are served well by this edition.

In addition to the Willis interview are two video interviews with Pakula, one each from 1974 and 1995; one with writer-director Jon Boorstin, who was an assistant to Pakula on The Parallax View; and a zany, conspiracy-ridden introduction by left-wing filmmaker and actor Alex Cox, director of Repo Man, Sid and Nancy, and other films. Finally, the accompanying booklet contains an excellent essay by Nathan Heller, a staff writer at The New Yorker, and an interview with Pakula that goes into more depth than either of the video interviews. 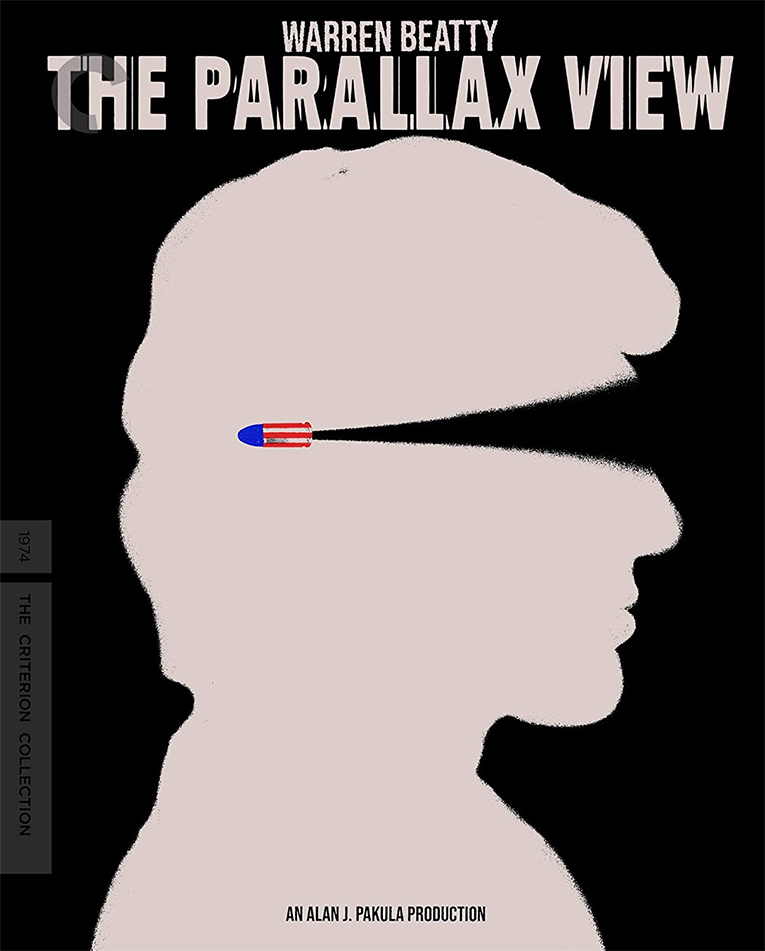 Though in part inspired by the assassinations of John F. and Robert Kennedy and Martin Luther King Jr., The Parallax View lets you hang your politics at the door and enjoy the film as a suspense thriller.

Be sure to watch for: The establishing shot of the final dramatic scene: the interior of a vast convention hall filled with round tables covered in tablecloths of red, white, or blue, and arranged to eerily evoke the American flag. Other than source music from a high school band at the far end of the hall, the scene is played out in silence and ends in a conclusion you won’t forget.