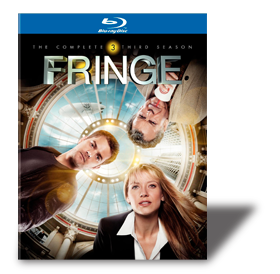 The Best Science-Fiction Show on Television Gets Blu-ray Treatment

Fringe, though popular with fans, was teetering on the brink of extinction as it neared the end of its second season. But Fox gave it more time, and both the network and the fans have been richly rewarded. Fringe is the best science fiction procedural since The X-Files, and (sorry, Mulder and Scully) in many ways it's even better.

The plot involves a parallel universe and a slew of problems that start in a flashback when super-scientist Walter Bishop (John Noble) visits the other universe to bring back the double of his deceased son. Walternate, Bishop's alternate-universe guy, is an often vicious, always ambitious political leader bent on revenge. And when both worlds begin to experience wormholes and start to shatter, Walternate declares war with the alternate world and it becomes a case of "them or us."

Both sides have a division of the FBI called Fringe Division, and each employs a heroine agent. In our world it's Olivia Dunham (Anna Torv), and to keep things clear her counterpart is named Fauxlivia. This richly layered third season starts off with the Olivias mixed up. Our Olivia is a captive in the alternate world, while Fauxlivia is a spy who passes for Olivia in this world, where she even successfully seduces Walter's now grown son and Fringe agent, Peter (Joshua Jackson).

I've always been a sucker for parallel-universe plots, and Fringe is the best of them all, eclipsing Sliders, which used to be my standard. Parallel worlds usually fall into the "what if" category; you know, What if John F. Kennedy had survived the attempt on his life? or What if the South had won the Civil War?

Fringe uses icons to let us know where we are -- the Statue of Liberty is gold, there are still two towers in lower Manhattan (though not copies of the familiar twin towers), and dirigibles cruise over the city and dock at the Empire State Building (because apparently the Hindenburg tragedy never occurred). If you look quickly (or stop the Blu-ray Disc to study), you'll see many small differences like unusual road signs, currency, and posters. Of course the biggest difference is that the Fringe Division of our world is in Boston, while the other one is in New York.

Many science-fiction television shows put SFX first and coast on the characters, but not this one. Fringe presents award-caliber performances week after week. Anna Torv is a marvel. She not only plays Olivia and Fauxlivia but also gets a crack at imitating Leonard Nimoy when Walter's former partner, William Bell, becomes embedded in her consciousness. Also right on the money is John Noble, who makes the eccentric Walter a lovable and fascinating character. The other parts, including guest spots, are immaculately cast characters you'll grow to love and look forward to in each episode.

The show is still shot on film, and the picture's richness and definition are top quality. But as good as the broadcasts have been, these 1080p discs are even better. A lot of the action shots occur in dark places that are beautifully rendered with inky blacks and good shadow detail. The sound is also movie quality, with excellent frequency response and a clever use of the surround channels.

The extras, which are a little on the weak side, include some featurettes on parallel existence that never stray beyond the show itself to let us know about other works on the same topic. There's also a gag reel, and two of the episodes have commentary. One of them comfortably uses animation, and there's another featurette dealing with that aspect of production. If you haven't seen Fringe, you've missed the best that television has to offer -- a perfectly executed show that's challenging, provocative, and always evolving, with each episode richer than the last.

Be sure to watch for: All of the show's establishing shots are impressive. Typical is a city overview at the beginning of chapter 4 in the first episode. The camera pans down, showing teeny-tiny vehicles and people in detail even though they seem a mile away. Upconversion can't do that. Blu-ray can.