How I Learned to Stop Worrying and Love Home Audio 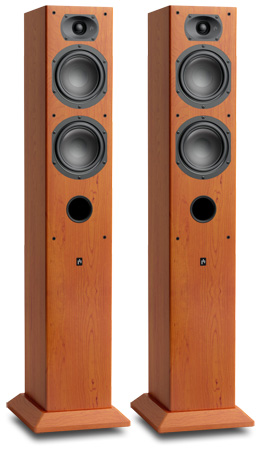 In my previous article, I detailed my visits to several retail stores, where I pretended that I had $2000 to spend on assembling a stereo system. The goal of this mystery shopping, as it were, was not only to see what products the salesmen would recommend, but also to get a sense of how an average consumer might feel when venturing out to buy audio equipment in a store. It was an interesting experience, and one that defied a lot of my decidedly grim expectations. As a follow-up, I was assigned the task of taking my (lack of) audio-gear knowledge and working with an Internet-direct company to put together a stereo setup tailored to my living room and my listening habits. For the purposes of this article, Jeff Fritz, my editor, set me up with Aperion Audio, a Web-based company out of Portland, Oregon, that prides itself on not only building superior speakers but also offering its products at affordable prices. In fact, Aperion got its start after company owner Win Jeanfreau’s boom box died in 1998 and he endured a frustrating search for a full stereo system with a "snug budget of $1500." Dealing with inexperienced and unknowledgeable salesmen was a big factor in his decision to start his own company, but more than that, Jeanfreau was flabbergasted by the outrageous markups that the brick-and-mortar stores put on their products.

As an Internet-direct company, Aperion cuts out the middle man and can thus offer its speakers at prices well below what you might see at Best Buy. Unlike the research for my first article, where I could listen to the systems only in the stores, where it’s nearly impossible to figure out what they’ll sound like in your home, this time I got to have the system shipped to my apartment. Also, for this piece I went a bit over my hypothetical $2000 spending limit, but we can just pretend that I begged and pleaded Scarlett -- my hypothetical girlfriend in my first article -- to give me a small loan.

My apartment building was constructed in the early 1900s, and it has 12' ceilings, hardwood floors, and thick walls that make it almost impossible to hear the other tenants. In fact, when the couple in the apartment above me moved out, I set up my drum set in my living room with no complaints. This was something of a surprise given that all of the open space, uncarpeted floors, and plaster walls did nothing to dampen the thumping of the kick drum or the clang of the cymbals. Armed with my first-hand knowledge of how my room handles sound, I called the guys at Aperion to find out what kind of stereo system would work best for me. I reached Oliver when I called, and after a few niceties we got down to the serious business of putting together a system that could really pump out the jams.

The first thing Oliver asked me about was the kind of system I wanted to assemble, and I told him that I just wanted a stereo setup -- nothing more. He next asked me about the size of my room and the style of music I typically listen to. I gave him the dimensions of my living room and told him that I would be listening to mostly rock. I like the look of tower speakers, and as I was sitting on my couch staring at the spot where the stereo would be, I decided to enquire about my options for floorstanding models. Oliver suggested the Intimus 5T ($990 USD per pair), a rather small tower (38"H x 6.3"W x 8"D) that features a 1" silk-dome tweeter and two 5.25" woven-fiberglass-composite woofers that can handle between 50 and 200W. When I got off of the phone and pulled this particular model up on the Aperion website, I discovered that the Intimus 5T won, in combination with the Intimus 5T-DB Hybrid HD system, the Home Theater & Sound Product of the Year 2009 award in the loudspeaker category.

Once we’d decided on the Intimus 5T, Oliver and I moved on to discussing what receiver would best suit my needs. Aperion doesn’t make receivers, but they’ve partnered with Marantz, a company that should need no introduction. Before we discussed model numbers and features, though, Oliver explained the difference between an integrated amp and a receiver. This is basic info for an audiophile, I’m sure, but having Oliver break it down in novice terms demonstrated to me that Aperion is just as interested in providing quality service as it is in making money. The first receiver we discussed was the Marantz SR4023 ($499), a genuine two-channel receiver that would be perfect for my two-speaker system. But we ended up going with the incredibly slim and fully loaded 7.1-channel NR1601 ($599), as it seemed like this would be more in keeping with what the typical consumer would buy. 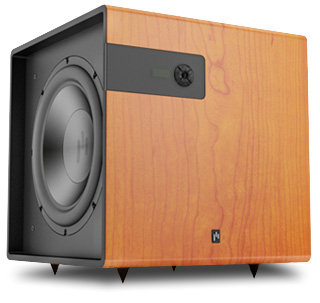 Lastly, Oliver and I discussed the subwoofer. Aperion offers a number of beautiful and powerful subs, but the model we decided would best fit both my room and my listening habits was the Bravus 10D ($699), a dual-10"-woofered 300W beast (and also another component of the award-winning Hybrid HD system) that could give me some great low-end sound when, say, blasting Soundgarden’s Superunknown (CD, A&M 540198). Oliver and I also settled on the smaller stuff, like speaker wire, that I would need to get my stereo system up and running. In the end, I selected 8' of 12-gauge Straight Wire ($40), a five-meter Aperion HP subwoofer cable ($40), and an Aperion HP Y adapter ($15), which I discovered would actually help me get more sound out of the subwoofer.

I had the packages shipped to my office so that they wouldn’t be stuck at the post office or sitting on my porch all day, so I had to stare at them the whole afternoon after they arrived, wishing I could go ahead and get them set up. When I finally got the huge boxes into my place, I opened them like a seven-year-old might tear into a Christmas present. A stack of pre-selected CDs sat on the coffee table as I unpacked my treats. I got the absolutely gorgeous, Medium Cherry-finished Intimus 5Ts and the Bravus 10D into place, and I then set up the NR1601 and hooked up all of the cables.

The first CD I played on my brand new stereo system was Songs for the Deaf (Interscope 9800320) by Queens of the Stone Age, a masterpiece of rock production. I can honestly say that I’ve never heard this album sound better than it did through the Aperion/Marantz system. As I listened to the pop of the drums and heard the clarity of the hard-charging, crazily distorted guitar on "First It Giveth," I felt as though this was the first time I’d ever really heard this song. I tried this tune with the 10D on and was immediately in love with how well I could hear Nick Oliveri’s bass as it chugged along with Dave Grohl’s intensely fast drumming. Even with the sub off, I was amazed at just how much oomph the 5Ts could deliver. That first night with the system, I played a lot of CDs that I’ve loved for many years, and with each one I picked up sounds I’d never heard before.

I invited friends over the following Friday, and we listened to a ton of different artists -- everything from Ice Cube to Andres Segovia. My friends, none of whom are audiophiles, were floored by how good each album sounded. What was most surprising for me was just how well the 5Ts and the 10D handled higher volumes. Even at a volume that likely rivaled that of my drums, I couldn’t discern any deterioration of sound quality. My experience with high-quality audio gear is rather limited and my ears are untrained, so I don’t have the lexicon to give a totally adequate description of just how the system sounds, but I guess if I had to use one word it would be solid. I listened to Neil Young’s Harvest (CD, Reprise 2-2277) all the way through three times one night at a rather low volume, and the sound was so crisp and right there that I felt like I was sitting in a bar in 1972, listening to Young and his band play live. My ear is trained enough to hear the difference between a CD and an MP3, and with my iPod plugged into the NR1601’s USB port (a fantastic feature, I might add), I was surprised at how good the MP3 sounded. Never have I heard MP3s sound as full as they do through this Aperion/Marantz setup.

My experience with the Aperion/Marantz duo that I had the good fortune to audition in my home taught me a lot about what good audio equipment is all about. There’s definitely something very special and satisfying about hearing an album you’ve listened to hundreds or even thousands of times as though it were the first time you’d ever put it on. After having this system in my home, I realize that I’ll eventually have to get my hands on some nice audio gear to replace my boom box. And when I do, I won’t hesitate to give the good folks at Aperion a call.