JBL’s new Go 3 portable Bluetooth speaker, attractively priced at $39.95 USD, is no mere update but instead a virtual redesign of their popular Go 2.

The Go 3 comes — and goes — in a clear plastic box that reveals which of its five colors you’re buying: blue, teal, gray, red, or black. In addition to the speaker itself, the box contains a USB charging cable, a quick-start guide, warnings, and warranty information. 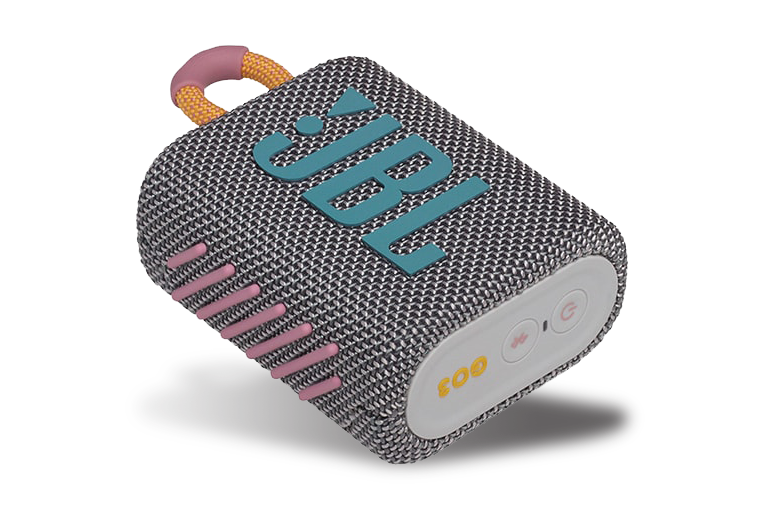 The Go 3 weighs 7.4 ounces and measures 3.4″W x 2.7″H x 1.6″D — about the size and shape of a fat pack of cigarettes. Basically rectangular, with rounded-off sides, it’s entirely wrapped in fabric. Its bottom edge (when it sits upright) has strips of rubber-like plastic to keep the speaker stable when playing loud music. A panel of the same material, scored for traction, is on the back — or the bottom when the Go 3 is laid flat. A big JBL logo of the same material occupies almost all of the speaker’s front surface/grille. Attached to the left endcap is a bungee loop, its carrying end reinforced with plastic; below where the loop attaches to the endcap is the USB-C charging jack. On the right endcap are buttons for power on/off and Bluetooth pairing. On the Go 3’s top edge are three buttons: volume up and down, and between those a multipurpose button with which, depending on how many times you press it, you can play, pause, or skip to the next or previous track.

The Go 3 has a waterproof/dustproof rating of IP67: the speaker’s internal components should be protected if it’s immersed in water to a depth of 3.3′ (1m) for up to 30 minutes. The speaker’s single 1.5″ driver is driven by 4.2W RMS to deliver its claimed frequency response of 110Hz-20kHz. The specified signal/noise ratio is >85dB, and the Bluetooth version is 5.1. The Go 3 is made in Vietnam.

I found the Go 3 very easy to handle. It perfectly fit the palm of my hand, and I could easily carry it around with only a single finger inserted in the loop. And it’s built with exceptional solidity — just grab it and go without fear of breaking it. 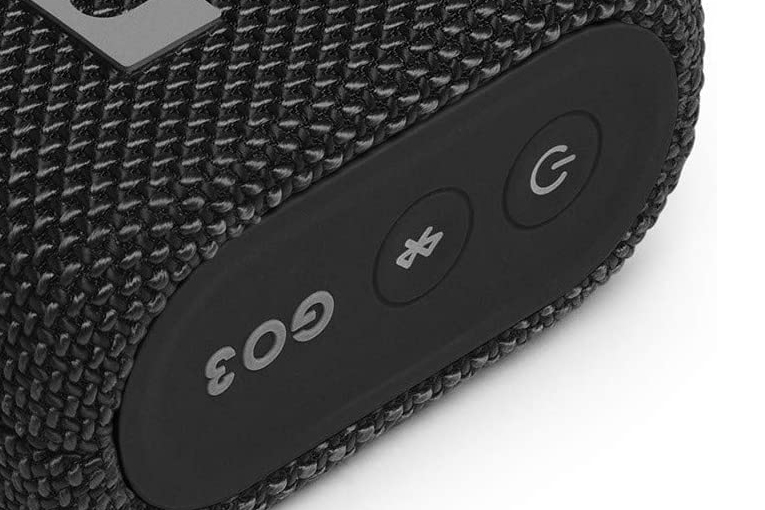 To start it up, press the power button for a few seconds, until you hear an ascending whoosh of electronic musical sound. The Bluetooth pairing button should start to blink. Find the Go 3 on your Bluetooth device’s menu, tap it, and pairing should be instantaneous. To turn it off, press power again — the Go 3 emits a descending whoosh and shuts itself down.

The multipurpose and volume controls worked fine. I didn’t have to press very hard, and each button gave a satisfying click to let me know the command had been sent.

The range of Bluetooth operation was very good in my little house — there was only one area in which the Go 3 wouldn’t work. Charging was easy — JBL’s claim that a full charge of the Go 3 takes about 2.5 hours was borne out by my experience. Unfortunately, so was their promise of a maximum of only five hours’ playing time on a full charge. 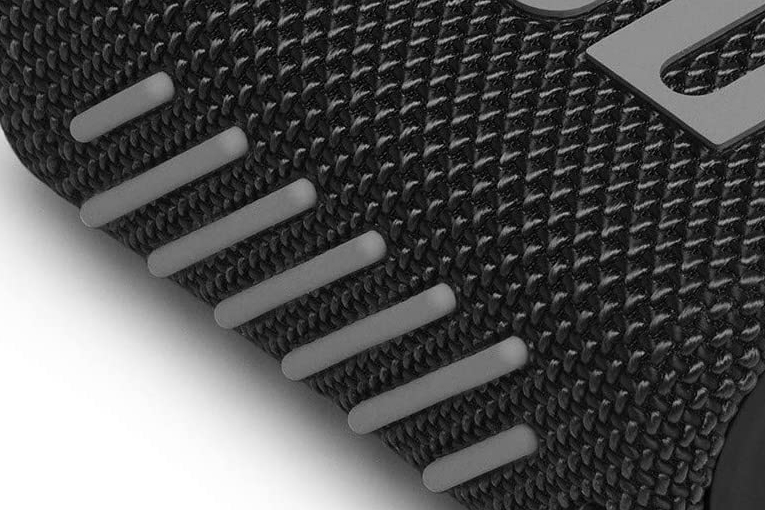 I mostly stood the Go 3 upright, but it worked just as well laid flat. And with that loop, I could hang it just about anywhere.

For so small a speaker, the Go 3’s sound was robust and refined. It played quite loud, and its midrange had warmth and presence. Highs were crystalline and sparkled, but were never shrill or pinched. Lows, of course, were virtually nonexistent, but within its specified bandwidth the Go 3 provided me with satisfactory sound. 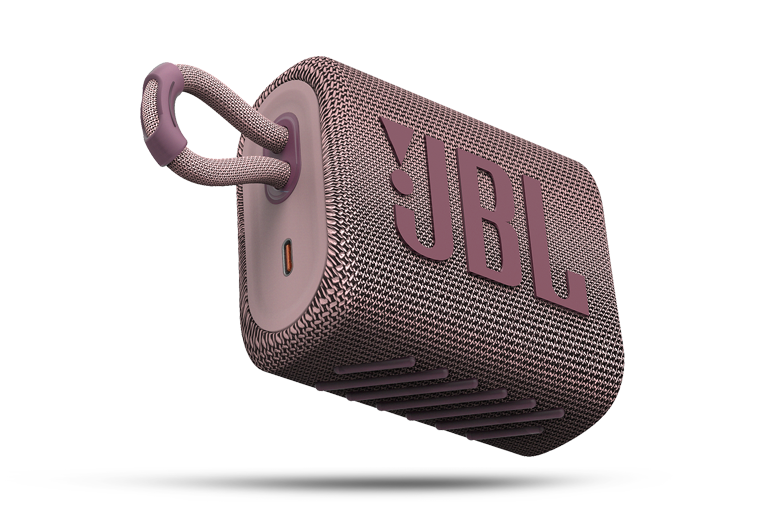 My Favorite Works compiles performances by master classical guitarist Andrés Segovia (16-bit/44.1kHz FLAC, American Decca/Amazon Music HD). Albéniz’s Sevillana is a sparkling piece full of melody, and hearing it through the Go 3 was an absolute delight. Every attack, every coloration, was rendered with a clarity impressive from such a tiny speaker, and the effect was effervescent. This recording contains no deep bass, so its absence presented no problem — for this music, the Go 3’s tonal balance was fine.

The late Dave McKenna is one of my favorite American jazz pianists — I named one of my cats after him. For me, his album Dancing in the Dark and Other Music of Howard Schwartz (16/44.1 FLAC, Concord Jazz/Amazon Music HD) is the ultimate set of mellow sounds that never descends into mere “mood music.” In solo performances, McKenna plays standards from the Great American Songbook with just enough embellishment to make them interestingly fresh and new, yet still mellow enough for relaxing listening. His piano’s very lowest bass notes went missing through the Go 3, but on this album most of the action is in the mids, the range in which the Go 3 excelled. 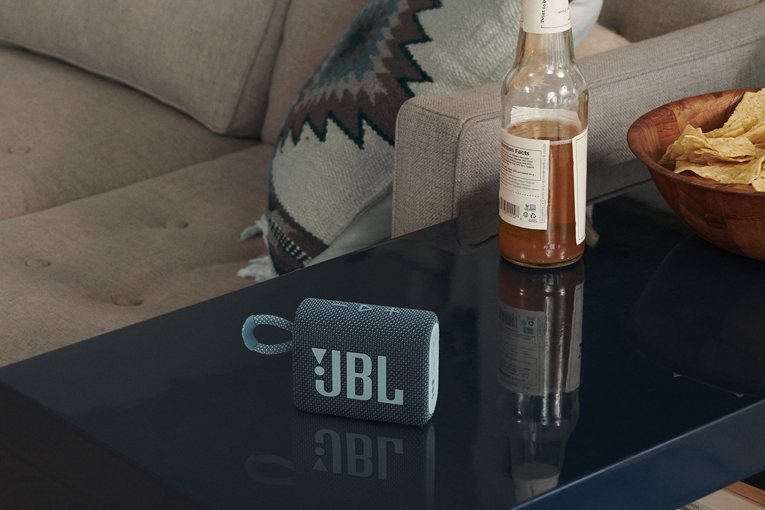 With the various rock and classical albums I tried, I found that my brain had to fill in the missing bass. I still heard the basics of a piece, especially with rock and pop, in which the lyrics and driving drums are in the midrange. The sparkly highs were more detailed than you’d expect from a tweeterless speaker with a single 1.5″ driver — voices were surprisingly present, though of course this little mono speaker couldn’t produce any sort of “soundstage.” I assume that most folks will use the Go 3 for background listening, for which it will be perfectly adequate with almost any kind of music — but I found that it excelled with solo instruments and jazz ensembles.

JBL’s Go 3 is an attractive entry-level Bluetooth speaker. It fits comfortably in the hand, is easy to set up and use, and has excellent sound in the midrange and highs. Its very small size allows it to be used almost anywhere, and the fact that it’s waterproof and dustproof means that it can accompany you into inclement environments. At this low price and tiny size, it would make a perfect and literal stocking-stuffer.