Midsummer -- the perfect time for a Bluetooth speaker that can, um, go with you anywhere. But unless you, er, go for a behemoth, such as Grace Digital’s EcoBoulder, you’re liable to find the sound of most smaller speakers somewhat anemic when you use them outdoors. In addition, most of them lack convenient handles.

The Aomais Go ($69.99 USD) has a big sound and a carrying handle. It’s been around a while, is still in production (with some modifications), and has gotten a lot of Internet buzz. I decided to grab a Go -- by its handle, of course -- to see if it warrants all the positive user reviews it seems to have earned. 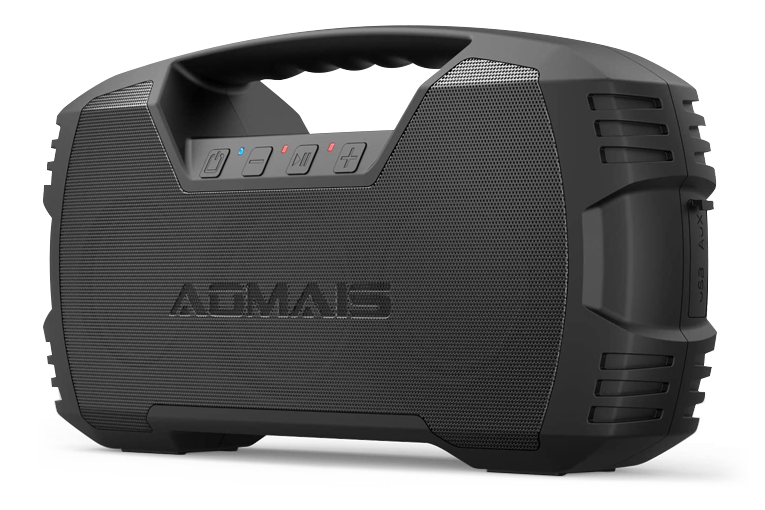 For all the hype the Aomais Go has generated, oddly little is printed on its appealing multicolored box -- only that the Go is a rechargeable, waterproof Bluetooth speaker. Inside are the speaker, a USB-to-Micro-USB charging cord, a 3.5mm audio cable, a quick-start guide, and a card confirming Aomais’s one-year limited warranty. Both cables are quite short.

The Go comes in black, blue, or red, and resembles Darth Vader’s lunchbox. Its plastic body is clad in rubberized plastic, and its solid, inflexible handle continues the curve of the top of the case. The front and rear panels are covered with fine metal mesh: behind the front grille are two 2” drivers and two 1” tweeters, while the rear grille hides a 1” x 4” passive bass radiator. On the Go’s right side panel is a bay with a tight-fitting tethered hatch; open this to reveal a Mini-USB charging jack, a 3.5mm jack to connect non-Bluetooth audio devices, and a USB jack for connecting to the power bank, so you can charge your device while listening to music. Molded into the front grille is a large Aomais logo; on the bottom are two solid rubber feet. 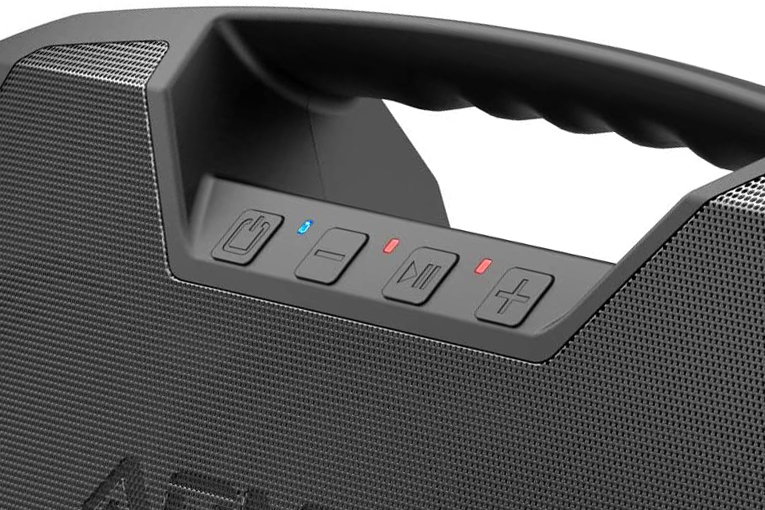 The controls are on the top front of the Go, below the handle, and there are only four: power on/off, play/pause, and two that do double duty as volume up/down and next/previous track, depending on whether they’re given a long or a short press. For waterproofing, each button is covered with a soft rubber pad, through which can be felt a secure click when it’s pressed. Separating the four buttons are three LEDs that indicate the status of Bluetooth operation, battery charge, and whether or not the 3.5mm audio jack is in use. Although the symbols on the buttons are large, I found them hard to see -- but with so few buttons and functions, I quickly learned which was which.

The Go measures 13.94”W x 6.69”H x 3.94”D and weighs 3.86 pounds. The build feels very solid, as if you could toss the Go around without fear of damaging it. Aomais advertises that the Go is dustproof, snowproof, mudproof, waterproof, even dropproof. A few specs from Aomais: IPX7 waterproofing, four hours to charge the battery, and maximum playing time on a full charge of 30 hours at 50% volume. The Bluetooth version is 4.2, and the Go’s power amplifier is rated at 30W for the four drivers. The Go is a stereo speaker, but can be paired with another Go for even wider stereo separation and more powerful sound.

I found the Aomais Go very easy to use. It paired quickly with my Bluetooth devices, and all of its buttons worked well.  Its rock-solid handle made it easy to move or sling around, and its rubber feet kept it from moving around on flat surfaces when I played it at high volumes. Power on and off are indicated not with verbal confirmations but with musical tones.

The Go’s range of Bluetooth operation was average for my house at about 28’; the range was much greater outdoors, as long as there were no obstructions. It took nearly four hours to fully charge the battery, after which I could play the Go at a moderately high volume for about 20 hours. 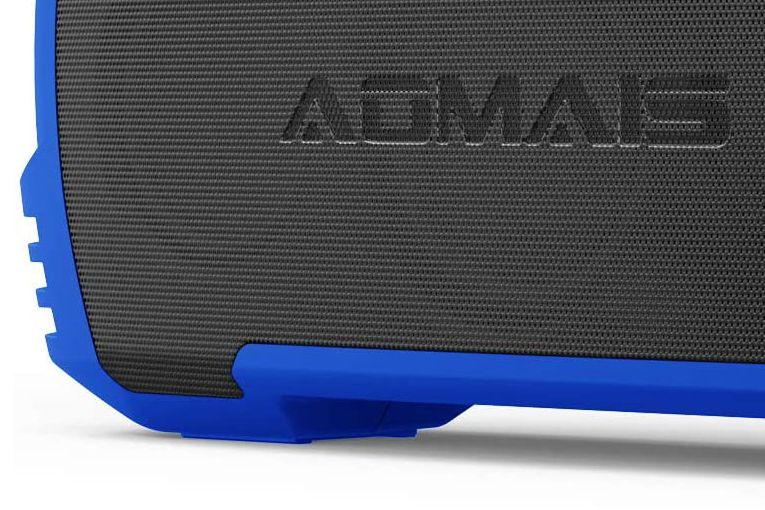 One thing might bother some people. The blue Bluetooth LED flashes rapidly during pairing, then steady blue when pairing is completed.  But when you start playing music via Bluetooth, it starts to flash slowly.

The Aomais Go can play very loud. Indoors, I had to turn it down to 75% of full volume before the sound didn’t drive me out of the room. So it definitely lives up to that hype on that issue.

Overall, the Go’s sound was very brash. Bass did not display focus or consistency. The midrange, by contrast, was razor focused and very prominent, depending on the track played. The highs were also very concentrated, and just short of brittle. This was not a good sound for indoor listening -- but outside, the Go’s projection of the mids and highs were assets, making it mostly effective for such environments. 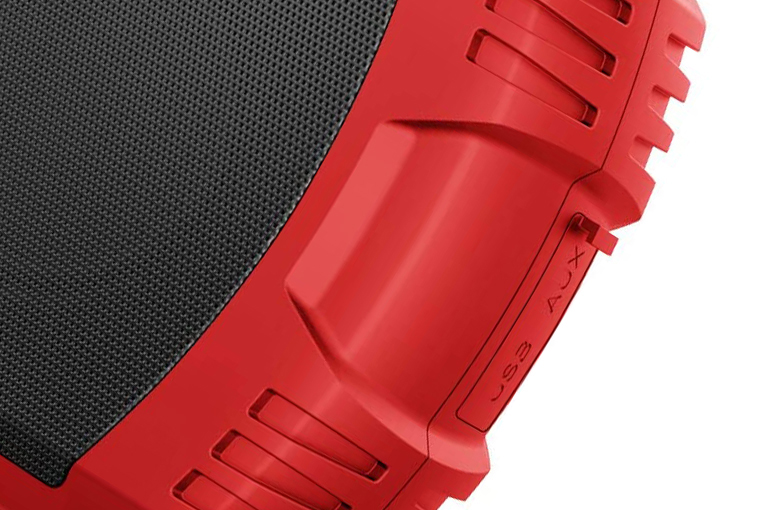 The second movement of Shostakovich’s Symphony No.11 begins with a grumbling, rumbling line in celli and double basses that leads into a more legato melody in the woodwinds. Later, the upper strings toss both ideas around. Still the best recording, to my ear, is a 1958 performance by Leopold Stokowski and the Houston Symphony Orchestra (16-bit/44.1kHz ALAC, EMI) -- it was one of the first Capitol Records LPs to bear the marketing slogan “Full Dimensional Stereo,” which they used to launch their first stereo releases. This release displays taut drama, with musicians and engineers at their best.  Through the Go, the excitement was mostly in the midrange and treble. The celli sounded fine, but the basses doubling the line an octave lower were muted and lacked focus. Still, overall, it was better sound than I’d expected from this speaker.

I expected the Go to do a good job with the title track of the Eagles’ One of These Nights, one of my favorite songs by this band (16/44.1 ALAC, Elektra/Asylum). It has amiable bass with a smooth vocal by Don Henley -- overall, a soft-rock sound with a dash of country. I was disappointed. The main problem was the bass line, which varied in volume with whether or not the Go’s little drivers could handle the frequency of the note played. Despite the hype about its bass response, this speaker will not please bass lovers.

Frank Sinatra proved his mastery of ballad style on many albums. I turned to another Full Dimensional Stereo release, Nice ’n’ Easy, from 1960 (16/44.1 ALAC, Capitol). Backed by Nelson Riddle’s lush arrangements, Sinatra turns in definitive readings of such songs as the Gershwins’ “I’ve Got a Crush on You.” Here again, all but the bass line sounded pretty much fine. Sinatra’s voice was particularly well served -- clear, and clearly his. But again, the plucked double bass faded in and out, depending on the frequency of the note played, which greatly detracted from the sound and my enjoyment of the music.

Aomais’s ad campaign for the Go makes a lot of claims, but the Go doesn’t live up to all of them. It’s loud, waterproof, has a handy handle, and is easy to use. Its midrange and highs are quite acceptable. But its bass performance is lacking, not only in quantity but in quality -- its audible lack of focus detracts from the overall sound. If you want an outdoor speaker that’s easy to carry around, and has forceful midrange and treble, you might like the Go. But if you like your bass properly balanced in the audioband, you’ll wonder why a speaker of this size can’t produce more of it.