JBL’s mammoth PartyBox 300 speaker is aptly named. It stands 27”H x 13”W x 12.7”D, weighs 34 pounds, plays really loud, and has microphone and guitar inputs for karaoke. Two PartyBoxes can be set up for stereo, and the LEDs that encircle its woofers light up with an impressive show of mesmerizing color patterns. It’s physically imposing -- but does it justify its price of $449.95 USD?

The PartyBox 300 is not double boxed, although it arrived at my home with a little damage to the box and none to the speaker, thanks to two Styrofoam endcaps. Inside were the speaker, a black 5’ AC power cord, a 12’ DC cord in JBL’s signature orange, a warranty card, safety instructions -- and a quick-start guide that’s inadequate in 19 confusingly laid out languages, with no diagrams of the controls and little explanation of how to use them. No audio interconnects are included. 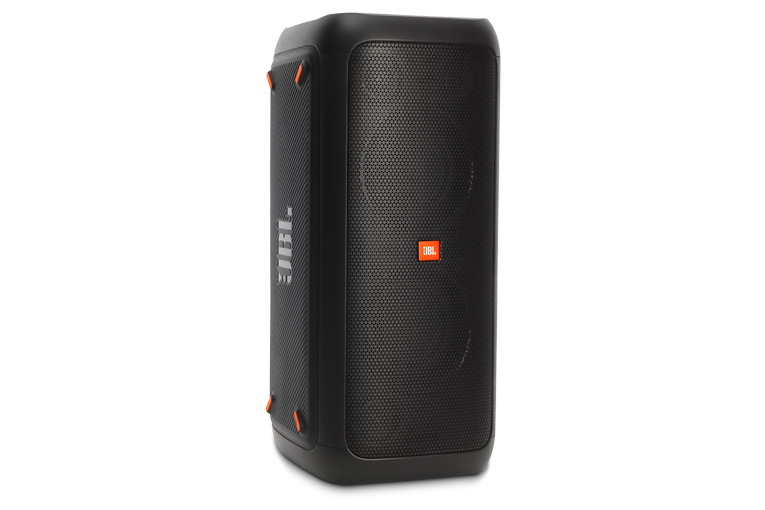 The PartyBox is a short tower of matte-black (the only color offered) and rectangular cross section, canted back a few degrees when stood on end on its built-in base. Other than those multicolored LEDs, the only color accents are all orange: 12 little feet (four each on the side and bottom panels), and two sturdy handles, one at the top and one at the bottom of the rear panel. These feet and handles allow the PartyBox to be stood on end or laid flat. I preferred the vertical orientation -- that way, all of the rear-panel input connections were at the top, and I didn’t have to stoop to use them.

The monochrome side panels feature a design of diagonal ribs over a solid reflective surface, with a big JBL logo at the center. The front of the speaker is entirely covered by a fine-mesh grille, at its center a much smaller JBL logo, this one orange. Behind the grille are three 2.25” tweeters and two 6.5” woofers.

At the center of the rear panel is an oval bass-reflex port, and at the top, just under the handle, are the inputs, outputs, and some of the controls. Bluetooth is the option of choice, but there are lots of alternatives. Input jacks -- a stereo pair of RCAs labeled Input and a single 3.5mm jack labeled Aux -- let you connect a player or device that lacks Bluetooth capability, and the RCAs will accept signals from a turntable that has its own built-in phono stage. There are also RCA output jacks, and a USB port for plugging in a flash drive or charging a USB device while the PartyBox 300 is operating. There are also two more inputs on 1/4” phone jacks labeled Mic and Guitar. Above each of these is a volume knob, so that you can mix your voice or instrument into music already playing. A L/R Channel button lets you reverse the left and right channels when using two PartyBox 300s for true stereo sound. And there are jacks for connecting AC or DC power. This panel is logically and neatly arranged, and the connections all felt solid. 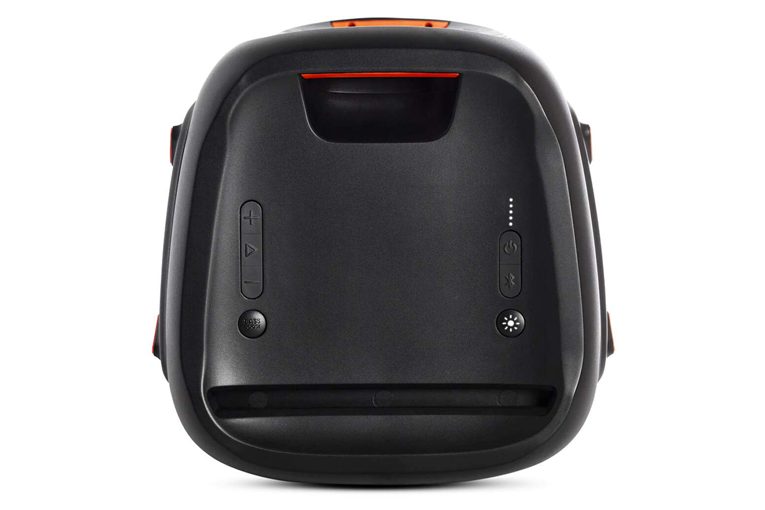 More frequently used controls are all on the top panel. At left are soft-touch buttons for play/pause, volume up/down, and bass boost. At right are buttons for power on/off, Bluetooth pairing, and one for the various light shows: Off/Meter/Pulse/Party. Press this last button and hold to turn on or off the four bright-white mini “strobe” lights behind the speaker grille, one at the center of each of the grille’s four outer edges: top, bottom, sides. The power, Bluetooth, and bass-boost buttons are backlit. Five tiny LEDs let you know the status of the battery charge. To activate these, press any button. At the front of the top panel is a deep slot running the width of the speaker, for use as a stand for a handheld digital device.

JBL claims for the PartyBox 300 a frequency response of 45Hz-20kHz, -6dB, an impedance of 4 ohms, and total output power of 120W RMS. The PartyBox 300 is compatible with Bluetooth 4.2; it’s not waterproof or even splashproof, though JBL says it’s “splash resistant.” The built-in 7.2V battery is 10.4Ah.

Since JBL’s instructions are so minimal, it’s a good thing the PartyBox 300 is so easy to use. The first thing to do is plug it in to charge its battery. Push the power button and listen for the upward swoosh confirming that the speaker is turned on. (The swoosh falls in pitch when you turn the speaker off.) There’s also visual confirmation: All of the PartyBox 300’s many lights flash once, except for the Bluetooth LED, which keeps flashing until the speaker is paired with your Bluetooth device. That done, the LED glows steadily.

I had no mike or guitar to plug into those inputs, but I did have a 3.5mm-to-RCA interconnect with which to check out the Aux and RCA inputs. They worked fine. I was also able to pop in a USB thumb drive. It, too, worked well, though the sound from the USB input was notably softer than via Bluetooth. The USB port works only with devices formatted FAT16 or FAT32, and will play only MP3, WMA, or WAV files.

The PartyBox 300 lacks a direct input selector -- switching among inputs proceeds by pecking order. When you insert a USB drive, the PartyBox automatically starts playing what’s on it. To use a Bluetooth device, or anything plugged into the Aux input, you have to unplug the USB device. 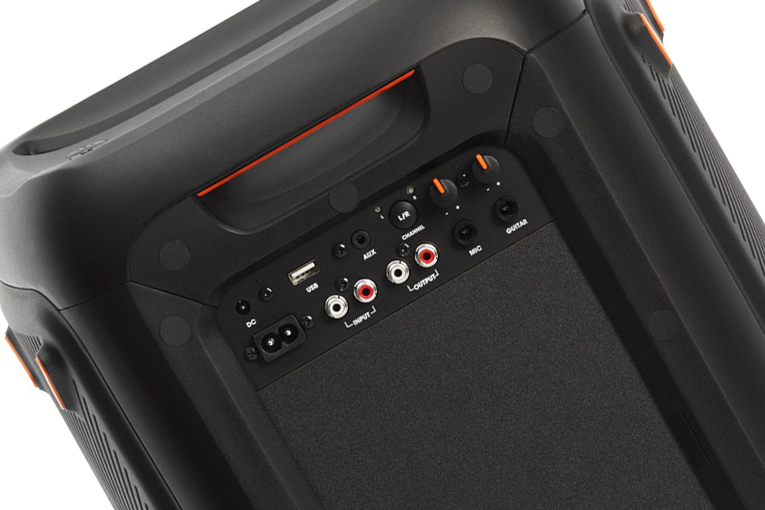 The range of wireless operation was better than with most Bluetooth devices I’ve tested at home: a maximum of about 35’, which exceeds JBL’s spec by a few feet. JBL claims 18 hours of playing time on a full battery charge, but take that with a grain of salt -- that might be true if you’re playing at lower volume, but if you’re trying to break your lease or annoy your neighbors, you’re going to get less time.

The light shows hypnotized yet puzzled me. The LEDs entirely encircle each of the two woofers, changing color, sometimes fully lit up, other times in alternating half-circles, though never in particular time with the music. They dimmed when the music stopped, brightened again when the music resumed. Some might find all this cool; I was glad I could turn it off. The upper circle of lights is useful for setting the volume level: the LEDs fill in incrementally to indicate the level, whether or not you’ve activated the light show.

A remote control would have been useful to adjust the light show and bass boost, but JBL doesn’t include or plan one, and there is no smartphone app for the PartyBox 300. 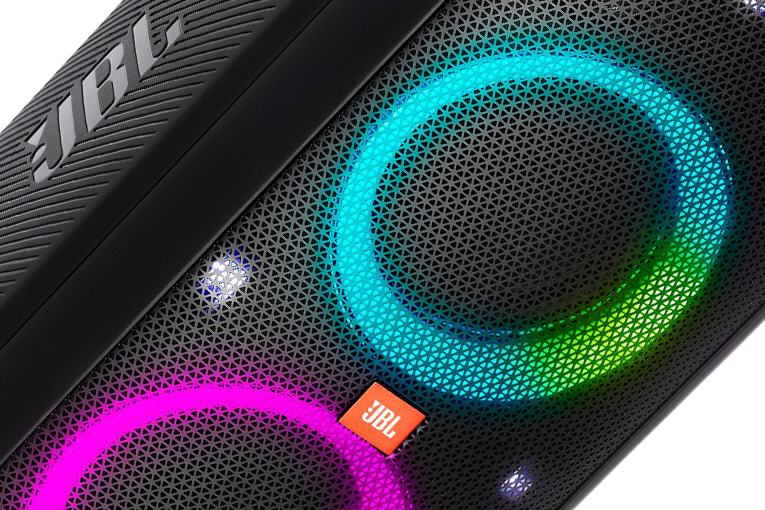 The PartyBox 300 could play loud, and might well do duty as a PA speaker, assuming a quiet audience. If you use it outdoors, remember that it’s not waterproof or splashproof -- I wouldn’t use it too close to a pool, or leave it outside unless it’s fully covered. It’s pretty much a dance-hall beast, and would be adequate for a dance party in a medium-size room; for larger venues, you’ll want a pair of them. But even at full volume, I couldn’t get the PartyBox to distort.

The PartyBox 300 strongly emphasizes the bass without completely eclipsing the midrange or the highs. The midrange had great presence, and the highs were generally clean and crisp, if very slightly reticent with some recordings. Most pop and rock is recorded with highs that are close to shrill -- the PartyBox 300 tamed that shrillness with surprising effectiveness.

One of my favorite bands these days is Vampire Weekend, especially their eponymous first album (16-bit/44.1kHz ALAC, XL Recordings) -- and especially “A-Punk.” The PartyBox 300 produced lots of focused bass that got my feet going, voices and drums were solidly reproduced in the midrange, and the highs were shelved down a touch, which balanced them just right. I’d never thought of this track as a dance number, but play it through the PartyBox 300 and try to stay still. 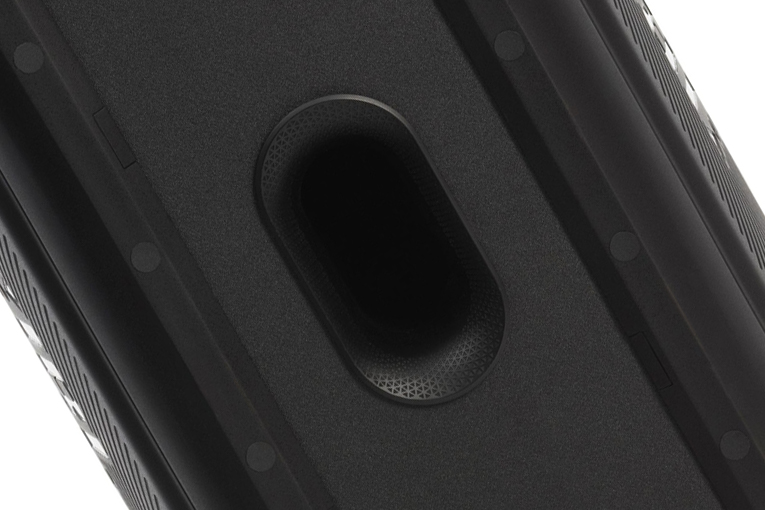 “I Just Found Out About Love,” from Camille Thurman’s Waiting for the Sunrise (24/192 FLAC, Chesky/HDtracks), sounded really good through the PartyBox, mostly because Cecil McBee’s plucked double bass was full and solid. Thurman’s remarkable scatting was detailed enough, every nuance audible. Steve Williams’s struck cymbals were light and airy, not harsh.

Classical music also sounded quite good through the JBL. Seiji Ozawa and the Chicago Symphony Orchestra’s recording of Stravinsky’s The Rite of Spring (16/44.1 ALAC, RCA) runs the gamut from very soft to incredibly loud. The PartyBox 300 was more transparent with this track than I’d expected. The soft woodwind solos were well defined and timbrally correct, while the loud bass-drum thwacks were bone-numbing.

JBL’s PartyBox 300 is a big, loud, portable Bluetooth speaker that lives up to its name. It has inputs for almost any source device, can be used as an amp for a mike or musical instrument, and would work well as a PA or karaoke speaker. For some, its hypnotic and thrilling light show will be frosting on the cake. 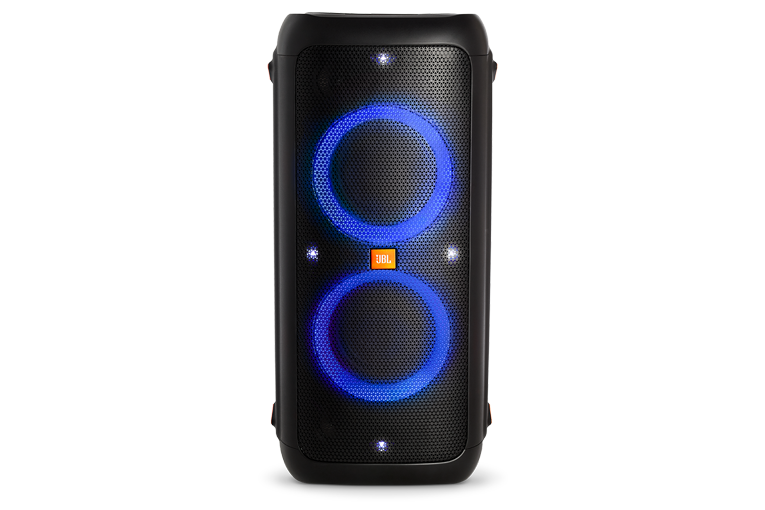 But the price is high. For a little over the cost of one JBL PartyBox 300, you can buy two Grace Digital EcoXGear EcoBoulders ($249.99), which sound just as good and play only slightly less loud. The Grace also has an AM/FM radio tuner, is waterproof, and has wheels on the bottom and an extended handle on top, so that it can easily be moved around like a suitcase. JBL calls the PartyBox 300 “portable” and provides handles for the purpose, but it will take a strong person to schlep around its 34 pounds more than once or twice. However, if you must have its light show and thumping bass, and will use the speaker mostly indoors, the JBL PartyBox 300 will deliver.

JBL makes two other models of PartyBox, both of which lack wireless capability. The PartyBox 200 ($379.95) is otherwise identical to the 300. The PartyBox 1000 ($999.95) stands 43” high, weighs 76.5 pounds, and offers an expanded light show, a DJ pad, and greater lower-frequency response. But two of those will set you back two grand. That’s some serious partying capability.