I remember when Grace Digital launched their first EcoXGear model -- a small, waterproof Bluetooth speaker. Now the line has swollen to more than 20 speakers of all sizes and prices, and something for everyone. One of the most recent is the mighty EcoTrek ($229.99 USD). Weighing 19.2 pounds and measuring 17”H x 15”W x 10.2”D, it falls midway between the EcoBoulder ($249.99) and the EcoXplorer ($169.99), both of which I’ve reviewed -- but the EcoTrek is the only stereo model of those three. Or you can link two EcoTreks, set up as much as 30’ apart, for two-speaker stereo. 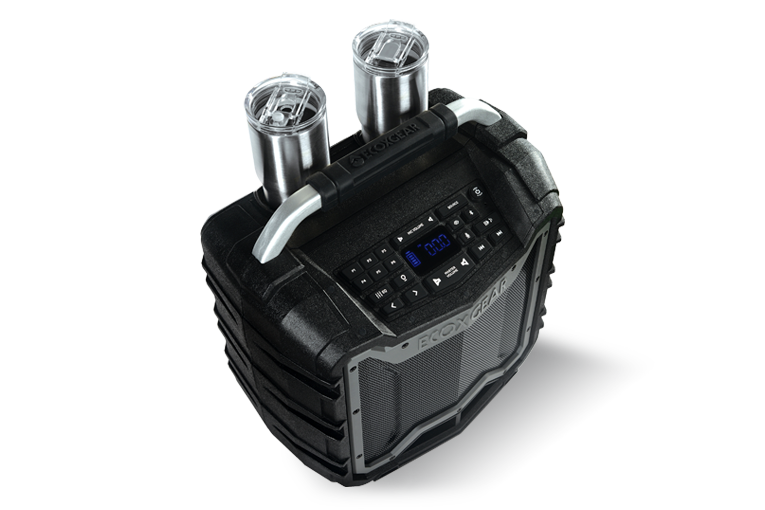 Released in time for summer, the EcoTrek is a speaker that can not only be used for tailgate parties, but will survive an accidental dunking in a pool, and continue to play even as it bobs to the surface -- if you take it to the beach, you can rinse sand off it with a hose. And Grace says it sounds good enough to use indoors. I was intrigued.

In the box is the EcoTrek itself, a power cord, and -- typical for Grace Digital gear -- a comprehensive, generously illustrated manual in reasonably large type. The speaker is charged by plugging it into an AC outlet for about eight hours, after which it should play for some 50 hours at normal volume, or ten hours at maximum volume. The battery is user-replaceable; the manual clearly explains how to do this.

The EcoTrek looks like a tenacious bulldog -- basically, it’s a rectangular box indented here and there, with a sturdy handle built into the top, and sizable rubber feet on the bottom to keep it stationary when it’s pumping out lots of bass. It’s made of metal, rubberized plastic, and hard plastic, with metal grilles front and back. It felt solid as a brick; I had little fear of doing it any actual harm unless I dunked it or splashed it with water before securely closing one or both of the two little waterproof hatches on its rear panel -- which I didn’t. Under one of those hatches is the jack for the power cord; under the other are the Microphone, USB, and Aux jacks. Clear graphics molded into the plastic indicate when these hatches must be completely sealed to waterproof the EcoTrek. 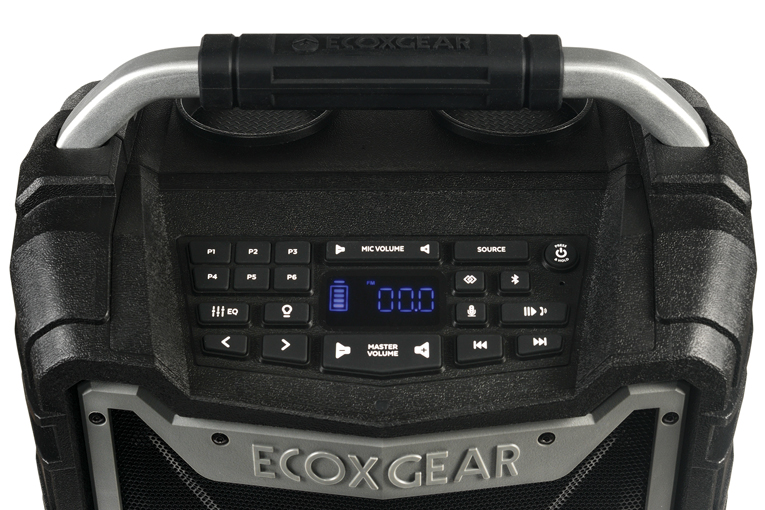 The EcoTrek is a stereo speaker: each channel is served by a 2.5” tweeter, a 5.25” woofer, and, on the back, a 5.25” passive radiator -- in total, four drivers and two radiators. Grace claims a frequency response of 50Hz-20kHz. On the top panel, all of the controls surround a 3.25” display that indicates the status of the battery charge, the volume level, the radio station selected, and much more. Above and below the screen are separate rockers for the Master and Microphone volumes -- the EcoTrek can act as a PA speaker or be used for karaoke. To the left of the screen are ten more buttons: six, numbered P1-P6, for saving as presets the frequencies of AM and FM stations; one button for turning on or off the very effective blue backlighting; tuning up/down buttons; and EQ, of which the five choices are Normal, Rock, Pop, Jazz, and Classical. To select one of these, press EQ, then use the tuning buttons to go forward or back until you’ve reached the desired EQ setting, which is then displayed on the screen. But there’s no way to adjust the EQ within any of the five presets.

To the right of the screen are buttons for Power, Source (Bluetooth, AM, FM, Aux 1), and EcoConnect (for setting up two speakers), Bluetooth pairing, EcoTalk (which activates Apple’s Siri virtual assistant or OK Google on your device), Play/Pause, and Next/Previous track. Also on the top surface are two cupholders. Missing, alas, is the bottle opener built into the EcoBoulder and EcoXplorer.

The EcoTrek is compatible with Bluetooth v.4.2, and has a claimed range of Bluetooth operation of up to 100’. Its waterproof/dust rating is IP67, which Graces explains: “the speaker can be submerged in up to 3 feet of water for 30 minutes without any damage. However, the speaker is NOT intended for constant underwater use.”

At 19 pounds, the EcoTrek is clearly not intended to be used while hiking or walking. (For those activities, try the EcoXplorer, which weighs ten pounds and comes with a shoulder strap.) The EcoTrek will sit solidly wherever you place it, but it will probably be best to leave it there.

I found the range of Bluetooth operation to be about 80’ with no barriers, but it’s hilly here -- you might get a little more on a flat, clear surface, such as a beach. My Bluetooth devices paired easily with the EcoTrek, with no problems. FM reception was very good, especially considering my place’s challenging terrain, and it was easy to set the six FM presets. You can search for stations by repeatedly pressing the Tune buttons, or hold one of them down for three or four seconds and wait for the tuner to scan and then arrive at the next strong station. Same for the AM band. All buttons mentioned above functioned perfectly. 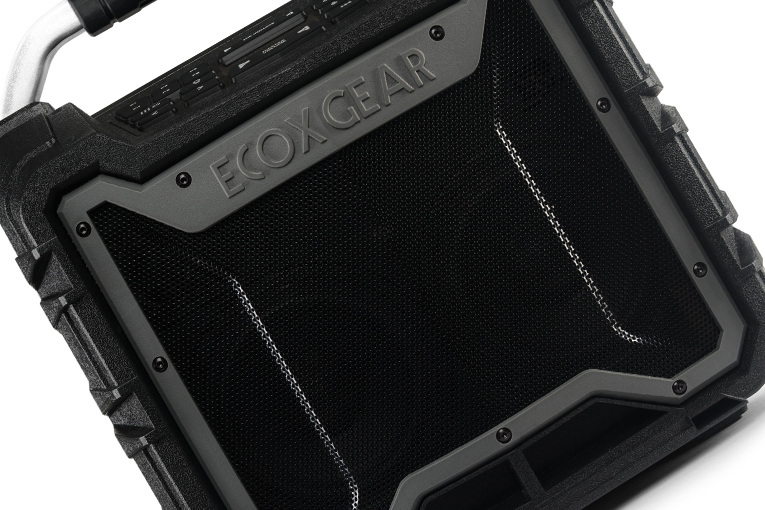 A full charge of the battery lasted a very long time. I played the EcoTrek eight hours at moderately loud volume on a single charge, and it took that long for the status indicator’s three bars to go down to two. Here in the woods, where I live, power outages are frequent. With the EcoTrek and five devices fully charged, I can have hours and hours of music to keep me sane until power is restored -- and the Grace’s FM tuner lets me hear local weather reports.

Any speaker designed to be primarily used outdoors should be able to play very loud, and Grace Digital’s EcoTrek did. The illuminated volume display has a range of “1” to “30” -- I found “13” or “14” perfectly adequate for my high-ceilinged listening room. When the EcoTrek is turned on, the volume always resets to “8” -- whatever the volume setting was at the end of the last session is not retained. This mildly irritated me, until I realized that it might be a safety measure. If you’re listening outdoors from a distance of 20’ or more, then shut down the EcoTrek and, the next day, set it up in your bedroom for some tunes, you’re liable to blast your eardrums out if it starts playing at the same level you used the day before. This underlines the fact that the EcoTrek does not come with a remote control. Grace Digital’s CEO told me that they see no need for a remote for an outdoor speaker. Still, I’d like to have one.

Overall, the EcoTrek provided very appealing listening. In the Normal EQ mode, the sound was very well balanced -- seamless tonally from the top to the bottom of the audioband, with a slight midrange emphasis. If you like bass, you’ll love the EcoTrek -- it really pumped it out. The highs seemed a bit reticent on first hearing, but as I listened more I realized that I’d been expecting some harshness, and that is not part of the EcoTrek’s sonic signature. The highs sounded very natural -- which is perhaps why I can recommend this speaker for indoor use.

The EQ presets made predictable differences in the sound. The Rock filter increased the volume level, though Grace warns that it might cause some distortion at high volumes; Pop increased both the midrange and highs; Jazz raised the level of the highs, and Classical the bass. I found that I preferred Normal for almost all the music I played. 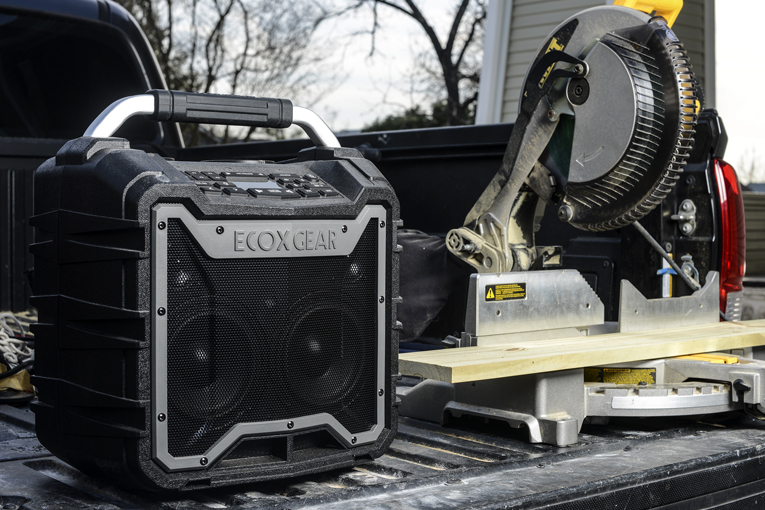 “One Angry Dwarf and 200 Solemn Faces,” from the Ben Folds Five’s Whatever and Ever Amen (16-bit/44.1kHz ALAC, 550 Music), has a catchy tune and high energy that really get me going. It begins with Folds’s pounding piano, which continues relentlessly throughout this track. He’s joined by equally unrelenting bass and drums, punctuated by shimmering cymbal strokes. The EcoTrek showed off its bass prowess with this recording, providing ample, solid lows -- and when I listened to it outdoors with the volume turned up, it rocked.

Jim Morrison, Ray Manzarek, Robby Krieger, and John Densmore are joined by bass guitarist Doug Lubahn in “Hello, I Love You,” the first track of the Doors’ Waiting for the Sun (16/44.1 ALAC, Elektra), and I was immediately struck by the recording’s clarity as delivered by the EcoTrek. The bass line, though a bit subdued, was so focused that I could almost feel Lubahn’s fingers on the strings. Other albums of rock, jazz, and pop fared just as well. If anything was distorted, the distortion was in the original master or transfer.

Classical music, too, worked well. The tonal palette of Respighi’s Roman Festivals, with Sir Eugene Goossens conducting the London Symphony Orchestra (16/44.1 ALAC, Everest/Vanguard), ranges from delicate solo mandolin to a huge orchestra with extra woodwinds and brass, and a percussion battery that includes timpani, bells, glockenspiel, cymbals, bass drum, field drum, snare drum, horse hooves, ratchet, sleigh bells, tambourine, tam-tam, triangle, high and low wood blocks, and xylophone. The EcoTrek took it all in stride, reproducing with great clarity all of these instruments’ sounds, from the sweet to the sizzling -- a testament to its generally even tonal balance and ability to reproduce the sound of complex, large-scale works without overloading its drivers.

Grace Digital’s ExoXGear EcoTrek is a powerful portable Bluetooth speaker. Intended to be used outdoors, it provides very loud listening levels without sacrificing sound quality. Its sound is evenly balanced from top to bottom, with a slight midrange bump. A full battery charge lasts a very long time, and the speaker is, overall, entirely user-friendly. Its FM/AM tuner is a plus, as is the superb backlighting for all its buttons, its lengthy three-year warranty, Grace’s terrific technical support, and a well-written, generously illustrated owner’s manual. And the rugged, waterproof EcoTrek can be taken anywhere. There’s a lot to like about this speaker, little to dislike, and . . . well, what more is there to ask? Another winner from Grace Digital EcoXGear.