Audioengine, based in Austin, Texas, specializes in computer, bookshelf, and wireless speakers that have been praised for their natural sound. The 512 is their first portable Bluetooth speaker. As Brady Bargenquast, a founder of Audioengine, put it to me: “The goal was to use familiar industrial design cues for the size and shape, but to best the competition with the sound. So we voiced the 512 as we’ve tuned other Audioengine products, with the main challenges being battery play time, the full-range micro driver designs, and cabinet acoustics (and cost of course).” 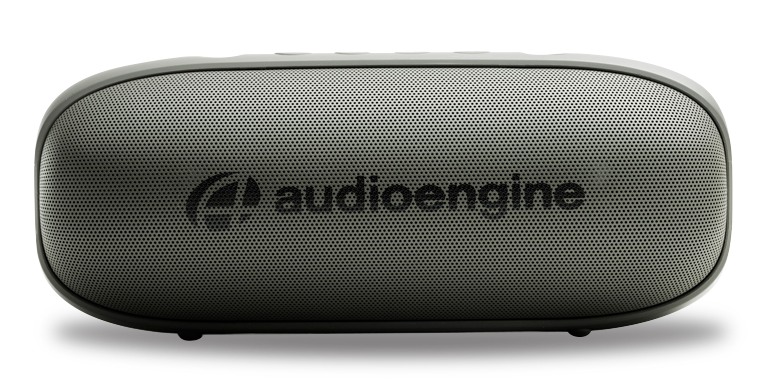 The Audioengine 512 costs $169 USD and comes with a generous three-year warranty. Its plain white box is encased in a slipcover bearing two-thirds-size pictures of the speaker and listing some of its features -- but, oddly enough, not “true stereo sound,” which to me is one of the 512’s main attractions (see below).

Inside are the speaker itself, a USB-to-Micro-USB charging cord, and a quick start guide. The 512 looks like a vitamin tablet measuring 7.75”W x 3”H x 3”D and weighing 1.5 pounds. Wrapped around it lengthwise is a plastic band, on the top of which are the controls; on the bottom are four rubber feet that keep the 512 anchored when it’s really rocking. The 512 has two 2” full-range drivers and one 3” x 1.75” passive radiator.

On front and back are fine-mesh metal grilles. Behind the front grille are Audioengine’s name and logo, printed in a ghostly gray so understated that it’s invisible from more than a foot or two away. On one end of the 512 is a covered bay that conceals a Micro-USB charging port, and a 3.5mm jack for use with non-Bluetooth devices. The 512 is currently available only in Black or Forest Green; other colors are being considered. 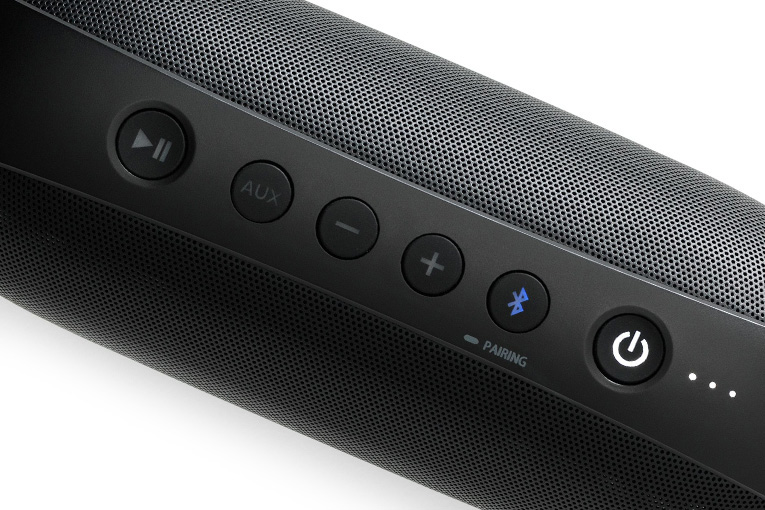 The six pushbuttons on the top control: power on/off, Bluetooth pairing, volume + and -, activation of the auxiliary jack, and play/pause. The power button glows an unobtrusive white when the speaker is on; the Bluetooth button flashes while pairing, then steady blue when pairing is achieved. Voice prompts ease the pairing process, and soft, mewling electronic sounds confirm that’s it been switched on or off. Three tiny white LEDs next to the power button indicate the status of the battery charge.

The 512 contains a class-D amplifier specified to output 10W RMS per stereo channel. Audioengine claims that fully charging the battery takes five hours, and that a full charge should provide 12 hours of playing time, depending on volume level. The claimed frequency response is 60Hz-20kHz. The Bluetooth version is 5.0, supporting codec SBC and profiles A2D and AVRCP.

The 512 was very easy to use and performed like a champ. Bluetooth pairing was easy, and each button did what it was supposed to do. Audioengine claims a range of wireless operation of up to 100’. As usual in my cluttered house, I got about 21’ -- but outdoors, with no obstructions, I was able to achieve 65’ before the 512 began to stutter. This is a larger radius of operation than I’ve gotten with any other Bluetooth speaker. 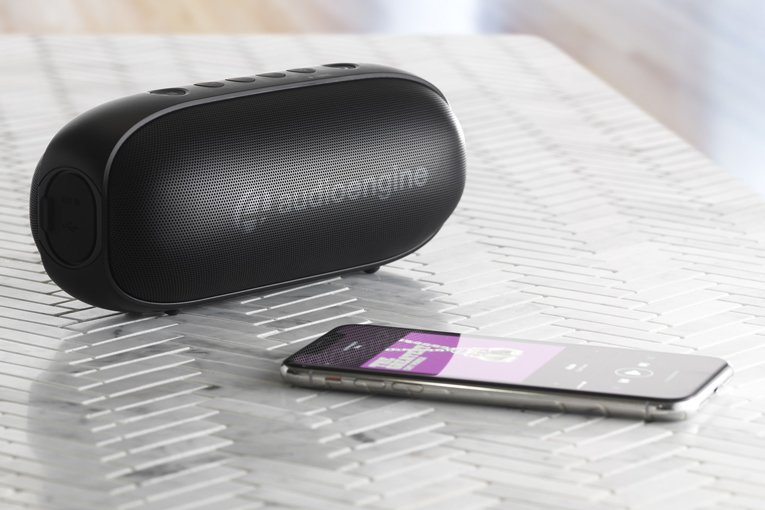 The 512 was easy to carry in one hand, and its rock-solid build quality meant I could move it around with no fear of harming it. The controls’ lighting was subtle and didn’t intrude on my listening. Audioengine’s estimates for the battery were about right: Fully charging the battery took about 4.5 hours, which gave me about ten hours of playing time at high volume.

Somewhere, I saw a blurb that called the 512 an “audiophile” speaker. I concur. The 512 is voiced to sound more like a loudspeaker you’d find in a stationary audio system than like a wireless portable: Its bass wasn’t exaggerated, nor were its highs too prominent. The overall sound was tonally even from top to bottom of the 512’s bandwidth: silky highs; a midrange with just the right amount of presence; and bass that was solid, without a hump in the midbass.

I was listening to an organ work by J.S. Bach in which an upper-register passage is followed by a bass note. When that note sounded, I exclaimed aloud, “No way!” It was hard to believe that this tiny speaker could reproduce that note at all, but it did. And the 512’s stereo separation made for a listening experience not possible with most portable speakers of this size, most of which are, in any case, mono speakers. The 512 cast aural images to left and right, beyond the boundaries of the speaker itself, to produce a wider soundstage than any mono speaker or most portable stereo speakers can provide. 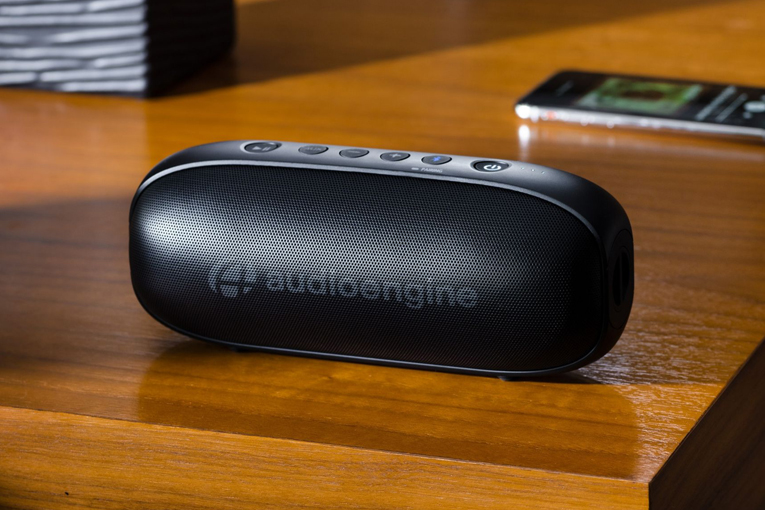 One of my favorite bands is 10cc, and my favorite album of theirs is their third, from 1975: The Original Soundtrack (16-bit/44.1kHz ALAC, Mercury/PolyGram/Mobile Fidelity Sound Lab). Track 1, “Une Nuit à Paris/One Night in Paris, Pt.1/The Same Night in Paris, Pt.2,” is an ingenious rock mini-opera that salutes the working girls of France’s capital, and I’d always been disappointed in how it sounds through most portable Bluetooth speakers. But through the Audioengine 512, all the many voice imitations were spot on, cymbals shimmered, piano notes sounded just right, and drums had presence and impact. Except for a few notes impossible for any little speaker to reproduce, the low bass was solid and exceptionally focused.

I enjoyed the 512’s excellent bass with other rock albums (Beatles, Rolling Stones), as well as pop and jazz -- e.g., Peggy Lee’s best midlife album, Mirrors, also from 1975 (16/44.1 ALAC, A&M). Her unmistakable voice was clearly reproduced, every subtlety easily audible. The sound of Ray Brown’s plucked double bass was solid, and Johnny Mandel’s tasteful orchestral arrangements were never intrusive, but were always very much there. 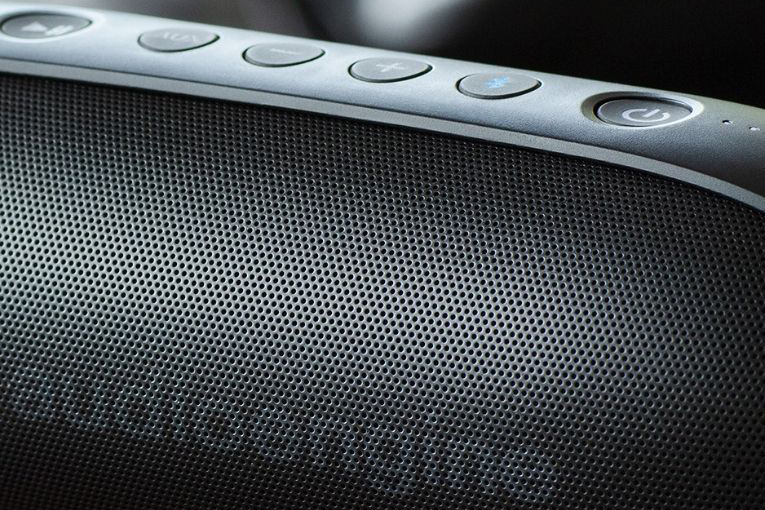 Classical music, too, did well. The ultradramatic opening of Vaughan Williams’s Symphony No.4, with Vernon Handley conducting the Royal Liverpool Philharmonic Orchestra (16/44.1 ALAC, EMI), sounded appropriately savage, the blazing brass grinding against each other like shifting tectonic plates. Timpani strokes were particularly focused and fearsome. The strings, especially violins, imaged way outside this little speaker, and the soundstage had depth as well.

Has the 512 achieved the goals specified by Audioengine founder Brady Bargenquast in the first paragraph of this review? I believe it has. In fact, the Audioengine 512 is a standout portable Bluetooth speaker, and an amazing little speaker at an honest price. Its reproduction of stereo soundstages was superb -- it gave the impression of a miniature two-channel audio system that you could enjoy outdoors. Some will no doubt prefer a portable outdoor speaker that has been voiced as such -- that is, one with a frequency-response bump here and there -- but I suspect that most readers of this site will prefer the more natural sound of the Audioengine 512. It isn’t just a contender -- it’s a winner.