Grace Digital has built a well-earned reputation for giving great value for the dollar, and their latest product is no exception. The modestly priced Mondo+ Classic Wi-Fi radio ($249.99 USD) is built for the future, but can be enjoyed aplenty in the here and now.

In strong contrast to the usual multicolored package screaming with hype, Grace Digital’s Mondo+ Classic comes in classily understated packaging: a beige cardboard box on which are printed, in black and white, outline templates of its front, back, and sides, along with its specs and the logos of compatible devices. 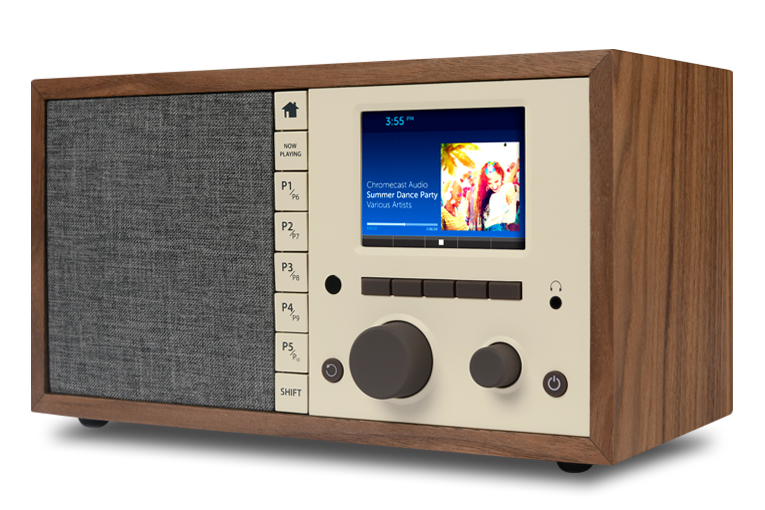 Inside are the Mondo+ Classic itself, an AC power adapter, a remote control with two batteries, an RCA-to-3.5mm audio cable, two antennas, and a meticulously written instruction booklet. The antennas aren’t listed under “Also Included” in the booklet -- after the latter was printed, Grace discovered that, because the Mondo+ Classic’s rear panel is made of metal, antennas were needed in some areas with a weak signal. Depending on how far you place the Grace from your network router, you may not need these.

The Mondo+ Classic is a nirvana of retro design. It comes in walnut veneer or black laminate, but after seeing it in person, I believe that almost every buyer will prefer it in wood. (Grace CEO Greg Fadul told me that sales so far were running at 60% walnut.) The photographs I’ve seen don’t do justice to its beauty -- in them, the walnut is too reddish. (Actually, it’s closer to blond.) The faceplate is off-white, the grillecloth and buttons a tannish gray. The front is divided in half, as on the classic table radios of the 1950s and ’60s that it honors: The left half is all speaker grille; the right half contains a 3.5” full-color screen, a headphone jack, and the buttons and knobs.

The five buttons directly below the screen are used as the screen dictates -- for instance, in setting the alarm. The knobs are similar to those on previous Grace products: a big tuning dial on the left, a smaller volume knob on the right. There are also two smaller buttons: Power on/off, and a button to return you to the previous display. 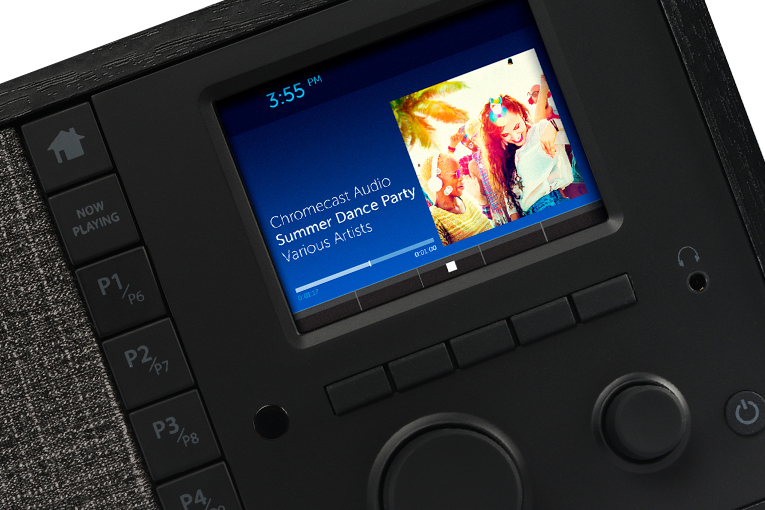 Separating the two halves of the Mondo+ Classic is a column of eight pushbuttons. At the top are buttons for Home and Now Playing, followed by five numbered buttons, each of which can store two station presets -- you toggle between their presets using the Shift button at the bottom. Presetting a favorite station is easy: Tune in the station, then press a preset button and hold it down for two or three seconds -- a message on the screen confirms that the preset has been successfully stored. However, if you then use that preset button to tune in the station but hold the button down too long, it reassigns the preset to whatever station you’re tuned to. I preferred to use the remote control, which has a separate button for each of the ten presets -- no need for a Shift button.

The Mondo+ Classic’s side panels are unbroken areas of beautiful wood, as is the bottom panel, which has four sturdy rubber feet. On the rear panel is a jack for the power cord, and a USB port that can be used to charge a portable device or to play music from a USB stick. Above these are two auxiliary jacks, for plugging in devices that can’t be used any other way, and RCA line-out jacks, to connect the Mondo+ Classic to a stereo system. In the upper left and right corners are jacks for the two antennas.

On the top panel is a big Snooze/Sleep Timer button -- a great improvement over the hard-to-find one on previous models. You can use it for two purposes: to snooze some more when you don’t want to get up right away, and to set a sleep timer when you want to go to sleep to music or nature sounds. You can set those times to fit your desires -- I have my snooze set for 20 minutes, the sleep timer for 35 minutes. 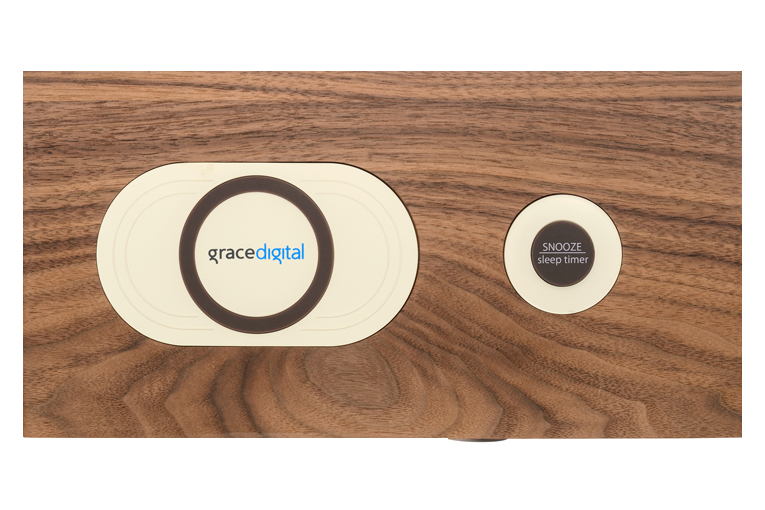 To the left of Snooze is a pad on which you can quickly charge your portable device if it’s equipped with the feature -- mostly, those made in the last year and a half. If your device lacks it, you can use the USB port on the back.

The remote control mostly duplicates the radio’s controls, and it’s the only thing I have to complain about. The remote is skinny for half its length, and bulbous for the other half, which contains the batteries. Its round underside makes it a little unstable when laid down, which probably won’t matter to most buyers -- but I left mine on the corner of a nightstand and kept knocking it off. Simple solution: turn it over, buttons down.

Setting up this Wi-Fi radio was easy. I plugged it in, and its screen displayed all of my available networks. I chose mine, entered my password, and was connected. I then followed the onscreen prompts to turn the radio on and put it in standby mode. Then I was ready to press the Home button, which brought up on the screen six icons: for Internet Radio, Audio Services, Media Player, Radio Settings, Aux In, and Alarm. You turn the tuning knob to highlight the one you want, then press in to select it. (At this point, Grace recommends that you sign up for their web portal, as do I -- it makes it much easier to search stations.) I discuss each of these sections below:

Internet Radio offers several onscreen categories for finding Wi-Fi stations. You can search local stations, or by genre, or a combination of those things. For grins, I picked Country, not expecting what popped up: Albania (0), Austria (1), Belgium (2), and Czech Republic (5). Wi-Fi radio presents an endless voyage of discovery -- Grace claims that 100,000 stations are available. No matter how arcane your tastes, you can probably find any genre you seek, and many choices within that genre. Almost all of these streams are MP3, but many run at a respectable 320kbps. A few are FLAC, and Grace hopes to soon offer that as a search parameter.

Audio Services is a list of free and subscription Internet-based content providers; it includes the BBC, Calm Radio, iHeartRadio, Live365, NPR, Podcasts, Radio.com, SHOUTcast, Sirius XM, and Sleep Sounds. The last provides a wide variety of sounds -- rain, beach, wave, brook, etc. -- that encourage sleep. Spotify and Pandora will be there soon, surely by the end of the year. This makes the Mondo+ Classic a radio for the future -- because it’s Wi-Fi, virtually endless updates and tweaks can be sent directly to your unit. 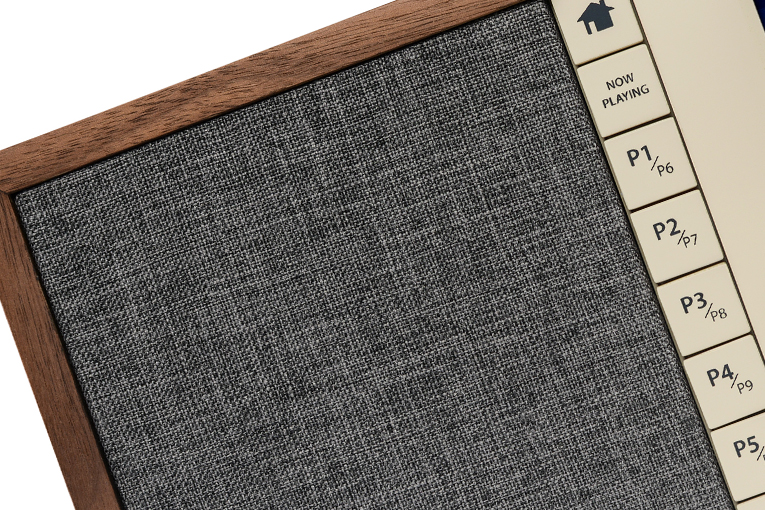 Media Player lets you access music stored on your computer. I couldn’t get my entire library of 20,000 albums loaded, but was able to get some of it to play. Grace recommends not loading up folders with too much information, and my library is organized in too few folders stuffed with too many files.

Radio Settings offers the opportunity to change the Mondo+ Classic’s display, equalization, and more. You can change the screen’s brightness and choose what to display when it’s in standby mode, or off: clock, station, whatever. The clock can be displayed white on blue or red on black. (Studies have shown that red is the most calming, sleep-inducing color.) EQ is largely done by genre -- Rock, Jazz, Classical, etc. -- though there’s also a Flat setting, and Treble and Bass sliders. Grace uses a sophisticated DSP/equalizer chip from Waves Audio -- these are subtle yet effective.

Also included in Radio Settings is Bluetooth, which works in both directions. You can transmit Bluetooth from your device to the Grace and use the radio as a speaker, or you can pair the Grace to Bluetooth headphones and listen to stations or services.

In addition to Bluetooth, the Mondo+ Classic has Google Chromecast Built-in, which means that the user can play music directly from Chromecast-enabled apps without having to use special connectors or adapters. There’s also a setting that allows the connection of other Grace Wi-Fi speakers or radios in other rooms. 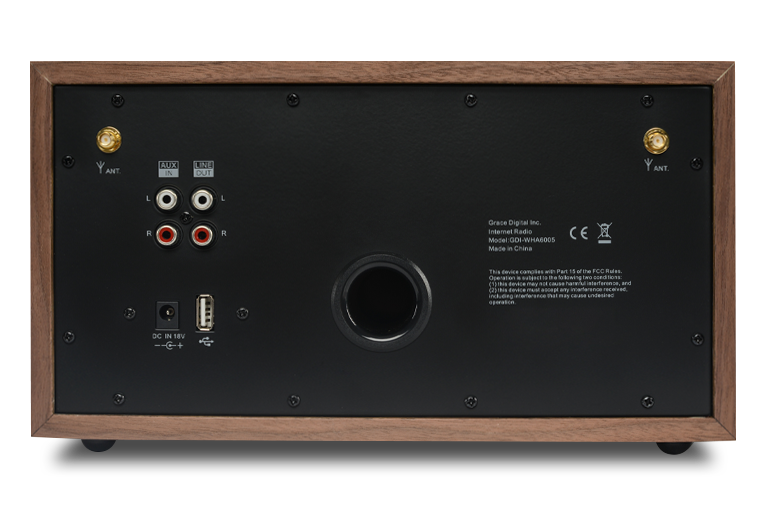 Aux In enables the auxiliary input, and Alarm gives you full control of the alarm system, including five different alarms. For each, you can specify the time you wish to wake and the station you want to start playing. (For me, 6 a.m. and West Virginia Public Radio.) You can also set the volume level, and disable or enable the alarms, with or without changing their other settings. The Snooze button is easy to find and effective to use.

The Mondo+ Classic lacks battery backup, but it’s easy to move around -- just unplug it, tote it elsewhere, and plug it back in. Even unplugged, it saves all your presets and other settings. And the USB port worked fine for charging my device.

All in all, the Mondo+ Classic was fun and easy to use.

The overall sound of the Mondo+ Classic was rich, warm, and exceptionally clear for a table radio. It played very loud without distortion, and in the Flat setting, the bass was emphasized but not, as it so often is, at the expense of the mids and highs. The midrange was very well focused, and the highs were crisp without being aggressive. The Grace had a well-balanced aural palette that most listeners should find appealing.

This Peggy Lee fan feels that she was at her best in front of a live audience. Her 2 Shows Nightly: Live at the Copa (16-bit/44.1kHz ALAC, Capitol) spotlights her in front of a big-band led by Ralph Carmichael in 1968, definitively singing everything from ballads to upbeat numbers. I chose Grace’s Jazz EQ setting for this, to tone down the bass a bit. It worked splendidly. In “Do I Hear a Waltz?,” the plucked double bass was solid and clear, complemented by percussion and high woodwinds that were clean and sweet. Lee’s unmistakable voice was the main focus of the midrange. Other tracks from this album were just as satisfying. If you wanted more bass -- perhaps an unrealistic amount, yet still focused -- play this in Flat mode. 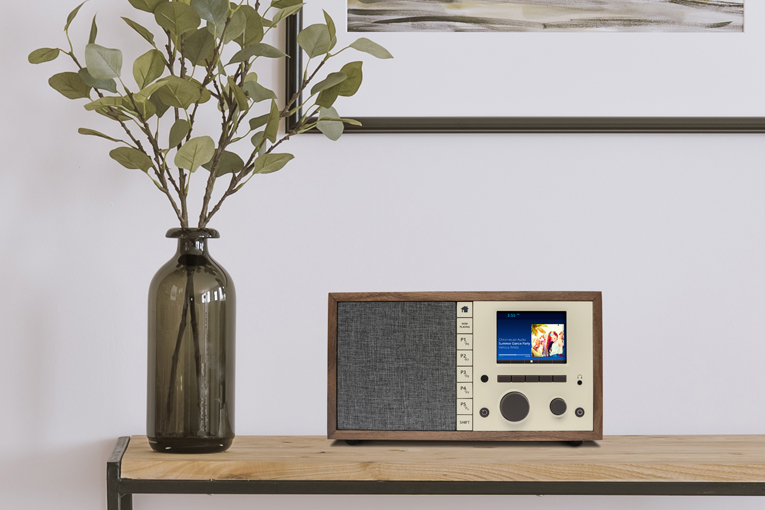 In the early days of stereo, Everest Records released some of the best-sounding orchestral recordings ever made. They’ve since become collectors’ items and have been reissued by many labels, including Classic Records. One of the most unlikely hits was a recording of a suite from Corroboree, a ballet by Australian composer John Antill, with Eugene Goossens conducting the London Symphony Orchestra (24/96 FLAC, Everest/High Definition Tape Transfers). It’s sort of a down-under Rite of Spring scored for huge orchestra, including a greatly enlarged percussion section. Despite the number of players required, many sections are hushed. The fourth movement opens very quietly with tambourine and harp, while the fifth and final movement ends with the orchestra going full tilt, all percussion instruments fortissimo -- including a bullroarer. It was all as clear as day through the Mondo+ Classic, which was able to reproduce the quieter sections with nuance and the louder passages with enough horsepower. Here I preferred Flat to Classic EQ, for the extra bass oomph.

The percussion that begins “Cecilia,” from Simon & Garfunkel’s Bridge Over Troubled Water (16/44.1 ALAC, Columbia), was absolutely awesome in scale for such a small speaker, but didn’t cover up the clean, clear voices. Again I preferred Flat, though I used the Bass slider to add a bit more bottom end without disturbing the upper frequencies. Both were very transparent.

Grace Digital’s Mondo+ Classic is an exceptionally versatile Wi-Fi radio that can provide endless hours of entertainment from many sources. It has Bluetooth and Chromecast Built-in, and with it you can access thousands of Internet Radio stations, dock and charge your portable device, or use it as the ultimate clock-radio. Moreover, it sounded really good, is fairly priced (always on sale on Amazon, by the way), and can accept firmware updates. And Grace has the best customer support out there. What’s not to like? Only that oddly shaped remote control. An easy Reviewers’ Choice!