I remember when 10 to 12 hours of battery charge time was considered a lot -- and that was only two or three years ago. Now we’re seeing mind-boggling charge times, even for small devices. The EcoPebble Powerbank can easily be held in the hand, yet boasts a 50-hour charge time -- a helpful thing, because it’s designed to charge your other devices. It’s also a Bluetooth speaker and a 200-lumen LED flashlight. 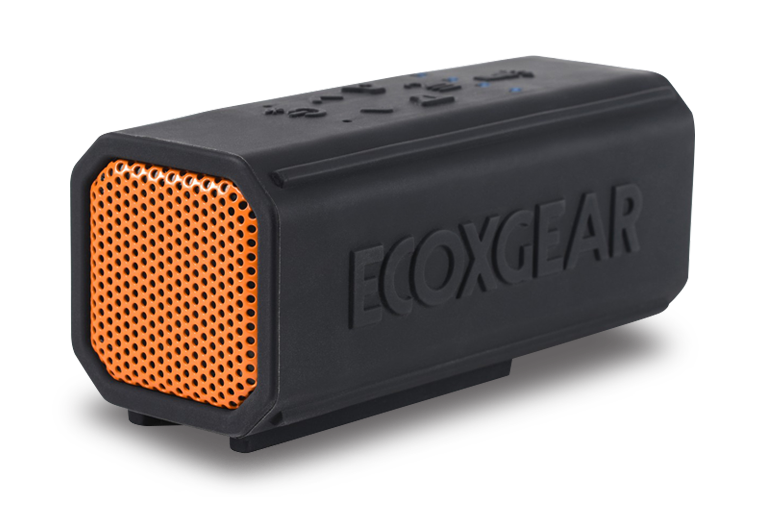 The unique and well-thought-out EcoPebble Powerbank ($99.99 USD) is one of the latest releases in Grace Digital’s EcoXGear line of waterproof models. It comes packed in a plastic cover that offers full visibility of the speaker within. One of the benefits of that is that you can see the color of the speaker grille, which is available in black or orange. These accessories are included: a USB-to-USB-Micro charging cord, an AC adapter plug for the USB cord, a carabiner clip, a screw-in loop with an attached carrying cord, an instruction manual, a mail-in warranty card, and an EcoXGear logo decal. Hooray and thanks for including the AC adapter. Any company that includes a USB charging cord with its device should include such an adapter so that you don’t have to connect the device to your computer to charge it, or buy a separate adapter.

The EcoPebble Powerbank looks like a fat, rectangular flashlight measuring 6.4”L x 2.9”H x 2.7”D and weighing 1 pound 7 ounces. One end comprises the speaker and grille, the other the bulb and reflector for the flashlight. The four long side panels are made of a heavy black rubberized material, in which are embossed all controls and logos. Most of the controls are on the long top side: buttons for skip forward/back, play/pause, volume up/down, on/off -- and, for the flashlight, a button with five positions: off, low beam, high beam, strobe, SOS. 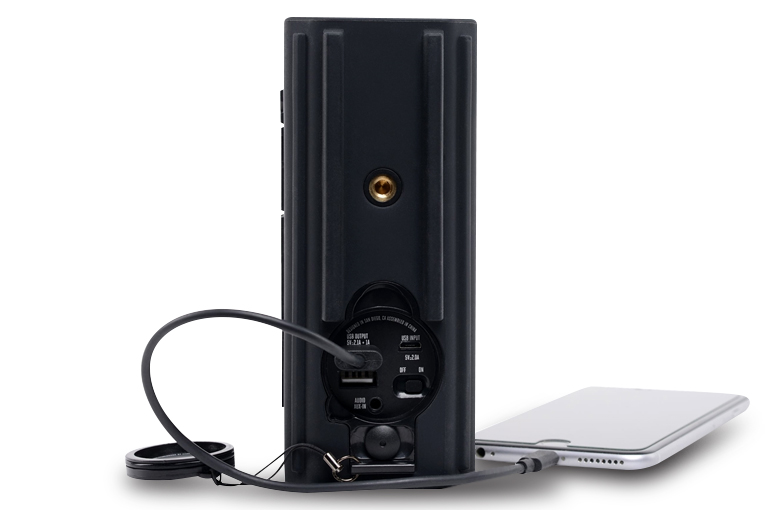 The bottom of the EcoPebble Powerbank boasts a 1.5”-diameter bay with a waterproof seal. Inside are the inputs, outputs, and master power switch. Unless you won’t be using the EcoPebble for a long time, you flip this master power switch to On and leave it on, and use the on/off button on the top of the EcoPebble for daily use. Inputs include one USB-Micro for charging, and a 3.5mm jack for connecting non-Bluetooth devices. In the latter case, you can’t take advantage of the EcoPebble’s waterproofing because you have to leave the bay open. The two USB jacks can be used simultaneously to charge other devices. Two 4”-long, rubberized runners on the bottom stabilize the Powerbank and keep it from walking around when playing loud music.

Next to the on/off button are pinkish-red and blue LEDs that let you know whether your EcoPebble Powerbank is on, off, or pairing. A recorded woman’s voice that sounds a bit like Apple’s Siri also announces that status. When you first fire it up, the blue LED flashes rapidly to tell you that the EcoPebble is ready to pair with your Bluetooth device. When you’re connected, the blue light glows steadily -- and if you haven’t been paying attention, the nice lady will let you know.

Just below the flashlight button is a row of four blue LEDs that indicate the status of the battery charge. Since you can use the EcoPebble to power and charge other devices, it’s important to know how much juice you’ve got left. You access this status display by pushing the on/off button once.

The EcoPebble Powerbank is hefty and feels very well made; I give the build quality an A+. The instruction manual is more thorough than most, and the English section is printed in color; other languages are provided in black and white. The limited warranty is generous: three years.

Bluetooth pairing to the EcoPebble Powerbank was simple, but the range of Bluetooth operation was less than the norm I’ve experienced, and more subject to conking out when there were obstacles -- including my body -- in the way.

The EcoPebble’s flashlight is superb: 200 lumens and wide dispersion. In fact, it’s better than any flashlight I have in the house. The flashing modes would be great in an emergency, or if the EcoPebble is mounted on bicycle handlebars (clip sold separately). When the EcoPebble is clipped to the handlebars with the light aimed forward, the speaker points back toward you -- right where you need it. 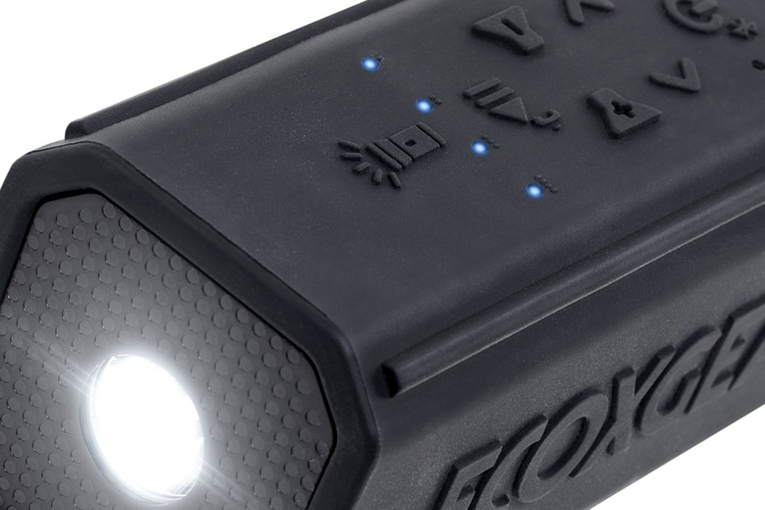 I drained my Astell&Kern AK Jr portable music player, and used the EcoPebble Powerbank to charge it overnight. It charged completely, using only one-fourth the EcoPebble’s stored power -- there was plenty left for other activities. My only suggested improvement: It would be great if each of the EcoPebble’s USB jacks had its own LED, to indicate when a device plugged into it is being charged. Some of my USB devices don’t let me know when they’re being charged, so that feature would be useful. The EcoPebble turned off automatically when it was finished charging the AK Jr.

Grace Digital claims that the EcoPebble Powerbank has an IPX7 Waterproof Standard value of IP67, meaning that it can be fully submerged (for a while, anyhow). I put mine in the tub and, lo and behold, it floated -- while still playing music. What a boon for a pool party, when someone accidentally kicks it into the water. Reports say that the EcoPebble can be submerged at 3’ for 30 minutes without harm -- as long as the cover for the bottom port is firmly secured. 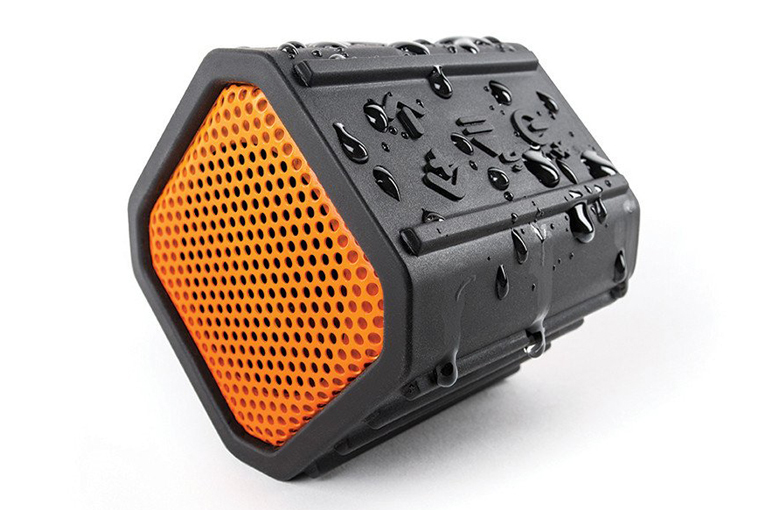 What can you expect from a single small driver? Usually, with such speakers, the bass just disappears. The EcoPebble Powerbank’s manual lists its frequency range as 20Hz to 18kHz, but with no measurement window given. That’s wishful thinking, but the midrange was clean at reasonable volumes, and the highs, if sometimes blurred by the midrange, were otherwise unobjectionable. The EcoPebble played fairly loudly -- loudly enough to be useful in the bike arrangement mentioned above. It could distort when I pushed it to top volume, as indicated by the Bluetooth tone. When I turned it down one or two notches, there was no audible distortion.

In fact, some music sounded quite good through the EcoPebble. One of my more delightful holiday albums, originally titled Music for an 18th Century Christmas and later reissued as An 18th Century Concert, is a collection of performances by I Solisti di Zagreb, conducted by Antonio Janigro (16-bit/44.1kHz ALAC, Vanguard Bach Guild). Corelli’s Concerto Grosso Op.6 No.8, “Christmas,” sounded fairly complete, the harpsichord improvisations clean and clear. The toy instruments in the Toy Symphony (Cassation) set up a crisp, joyful, undistorted din through the EcoPebble. (In the past two centuries the Toy Symphony has been variously attributed: to Wolfgang Amadeus Mozart; to his father, Leopold Mozart; and to Franz Josef Haydn. No one knows who actually composed and/or assembled the work; even in this case, one edition of this album credits Haydn, another L. Mozart.) 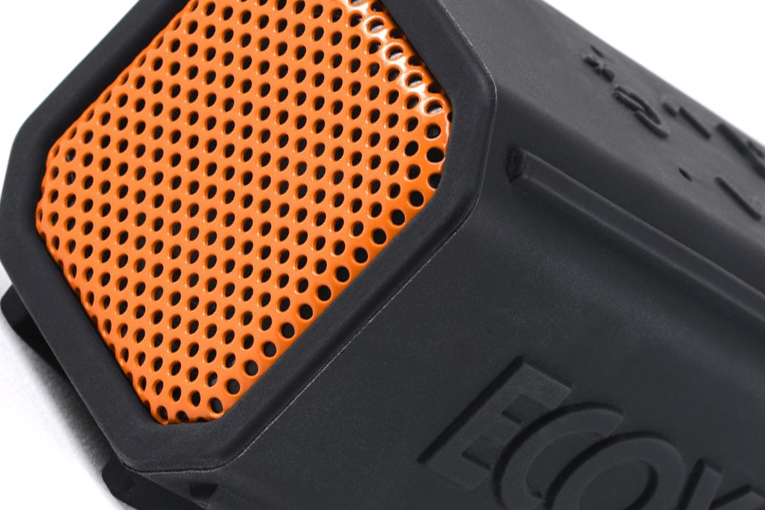 “The Boxer,” from Simon and Garfunkel’s Bridge Over Troubled Water (16/44.1 FLAC, Columbia), was a mixed bag. As long as it was just the two men’s voices accompanied by acoustic guitar, the sound was quite appealing -- but as more instruments, the orchestra, and the sound effects entered, the overall sound became a bit harsh. Still, the voices remained true.

“Flamethrower,” from the J. Geils Band’s Freeze-Frame (16/44.1 FLAC, Capitol), suffered from a near-absence of bass that made the voices and instruments sound sketchy and noisy, without purpose or design.

But no one will buy an EcoPebble Powerbank for serious listening. For background music, it was fine.

Considering Grace Digital’s EcoXGear EcoPebble Powerbank as only a speaker, you can do better for $99.99. But thought of as a triple-threat device -- a USB charger, a terrific flashlight, and a Bluetooth speaker useful for background listening, biking, or hiking; all of it waterproof, and durable enough to take abuse and keep on ticking -- it’s good value for the dollar, and deserves a solid B+.