In August of 2014, when I reviewed Astell&Kern’s AK240 portable player, it was the flagship of the company’s line. But it seems that every time I turn around, A&K comes out with something new. First was the AK Jr, a more affordable, stripped-down player; and now, superseding the AK240 (which remains available), is the AK380, A&K’s new flagship model. At $3499 USD, it better be.

Like other A&K players, the AK380 comes in a handsome presentation box with a recess for the player, and another below that for its attractive leather case, which is accompanied by transparent screen protectors. In a small box are a USB-to-USB-Mini charging cord and a quick-start guide. 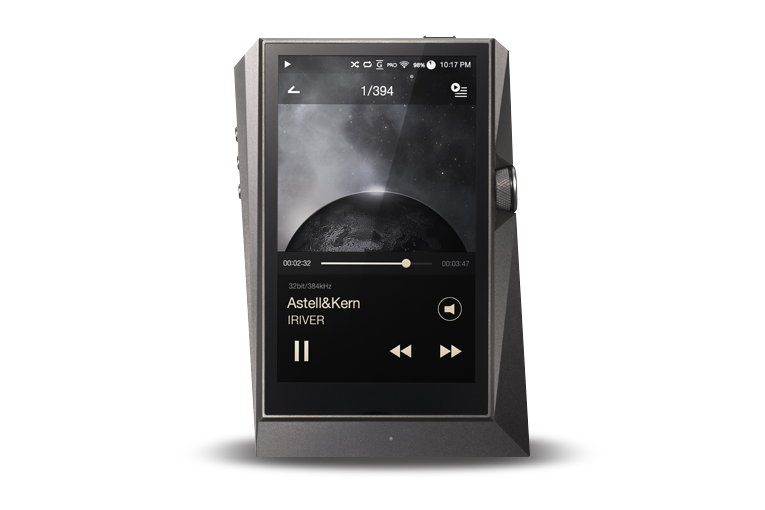 Compared to the AK240, the AK380 is big: 4.4”H x 3.1”W x 0.7” thick and weighing a substantial 8 ounces. The AK380’s leather case fits over it like a fine glove, adding 1/8” to each dimension; it never slipped. Like the AK240, the AK380 has diagonally beveled edges and, along its right edge, a click-stop volume wheel and a slot for a microSD card (the slot is inaccessible when the AK380 is in its leather case). On the front is a 4” touchscreen, and below it is a Home button, as on an Apple iPod.

Along the AK380’s top edge are 3.5mm unbalanced and 2.5mm balanced output jacks. The 3.5mm jack can be used as a regular headphone jack or as an optical output, which comes in handy when connecting the player to a stereo system: one can choose between using an external DAC or the AK380’s own. Also on the top edge is an On/Off button: a long press powers the player on or off; a short press does the same for the display. Along the left edge of the AK380 are buttons for Next and Previous Track and Pause/Play. On the bottom edge are a USB Micro input for charging or connecting the AK380 to your computer and a special, four-pin, balanced output port that supports such accessories as A&K’s AK380 Cradle -- which, through a recent firmware upgrade, now supports surround sound.

Considering the $1000 difference in price, you might well ask what the AK380 has that the AK240 doesn’t. But first, here are three things these two players share: 1) a whopping 256GB of internal storage, with a maximum of an additional 128GB with insertion of a microSD card; 2) cases made of aircraft-quality Duralumin (the AK380 is finished in a bronze color that A&K calls Meteoric Titan; the AK240 is available in Gun Metal or Stainless Steel) with an ultimately solid feel; and 3) native DSD decoding. 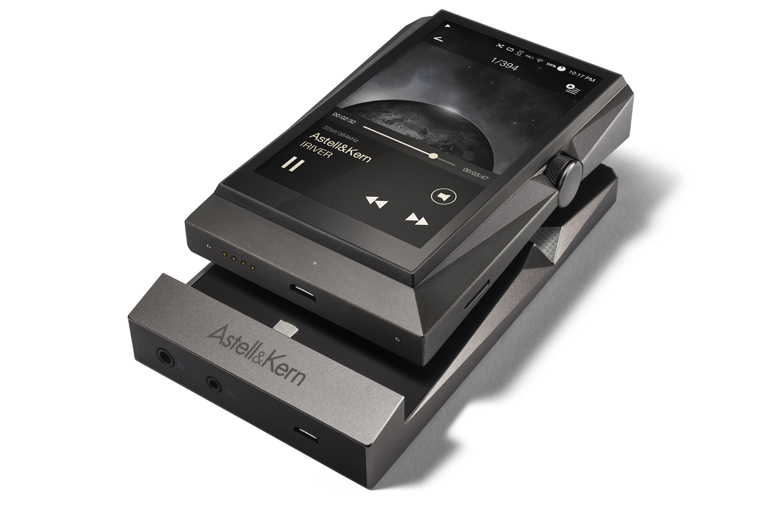 The equalization settings of the AK380’s parametric equalizer are finer than the AK240’s, and allow several presets to be saved. If you own several different pairs of headphones, you can adjust the AK380’s output for each, then permanently save those settings for the next time you switch ’phones. The touchscreen is a 4” TFT-LCD display, compared to the AK240’s 3.3” AMOLED screen.

Also new is the AK Connect setting, with which the AK380 can find and play files stored on a computer on the same network. And, like all current A&K players except the Jr, the AK380 includes Wi-Fi capability, which makes downloading updates a snap. A&K sends you a notice of any new update, just as Oppo does for its universal disc players. Bluetooth 4.0 (A2DP, AVRCP, aptX) is also included.

It took about four hours to fully charge the AK380. An indicator on the screen tells you how much power you have left. Information about the track currently playing is displayed at the top of the screen, where you’re also told whether or not gapless playing and/or Bluetooth are engaged, and other information. I had trouble reading these tiny icons at a glance; younger eyes might do better.

The bulky AK380 will fit into a hip pocket, but it’s heavy enough that wearing my much lighter wallet in my other hip pocket didn’t balance it out. A shirt pocket seems out of the question, though I can see it fitting into an inside sport coat or suit jacket. The biggest problem I had was that the AK380 was too big to fit comfortably in my medium-size hand. Though not much smaller or lighter, the AK240 seems made for my hand. But for me, all operation of the AK380 was two-handed.

All screen functions worked smoothly, though it sometimes took a bit longer to call up a DSD file. It was easy to search for files by album, artist, genre, or playlist -- and playlists were easy to create and use. You can also search by store, in order to buy titles and download them directly to the AK380, but the only such store so far available was Groovers, and only in Asia. Presumably, US stores will eventually be added via updates. 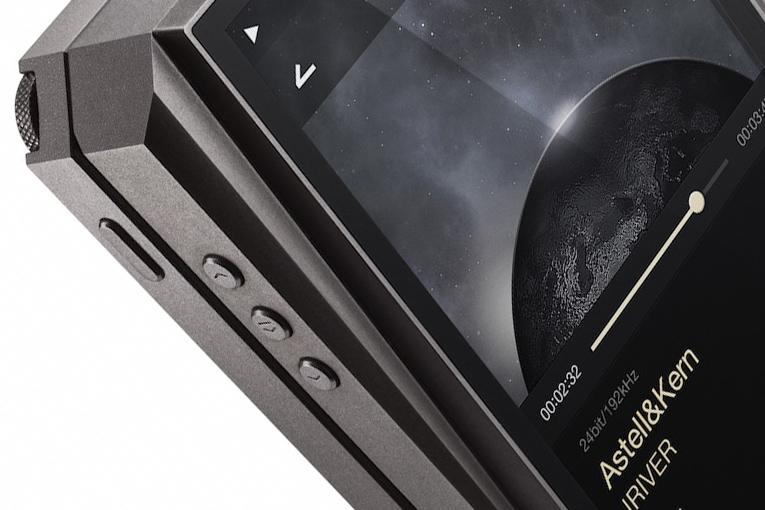 The AK380’s Play, Pause, and Next/Previous Track controls all worked smoothly and reliably. Scrolling through my library was very smooth -- a pop-up digital slider makes it easy to get from A to W listings in a hurry. Gapless play and Bluetooth pairing were reliable -- it was much easier to pair a Bluetooth device with the AK380 than with the AK Jr -- as were all other settings.

AK Connect is wonderful. When I tested the AK240, the MQS streaming system was balky; now it’s terrific. Just download the software and turn it on. Make sure you’re connected to your network, tap AK Connect, and when the screen comes up, swipe left to find your device (in my case, a Logitech Media Server). Tap that, and then, in my case, tap Music, which gave me the usual Logitech menu -- Albums, Artists, etc. I tapped Albums, and they immediately began to be available. It took a while to see my library of 30,000 albums, but in only about four minutes they were all available, and I could pick one and listen. Let this sink in: The AK380 already has a lot of storage of its own; on top of that, it could stream my music from another source. The possibilities seem endless.

I suspect I’m about to run out of superlatives, so I’ll get some well-worn but, in this case, entirely appropriate suspects out of the way: Awesome. Amazing.

The AK380’s new DACs had transparency, warmth, and accuracy in spades. The stereo separation was unbelievable, which created singular imaging. And what a soundstage: wide and spacious, but with everything focused and staying put -- unless the engineers intended otherwise. 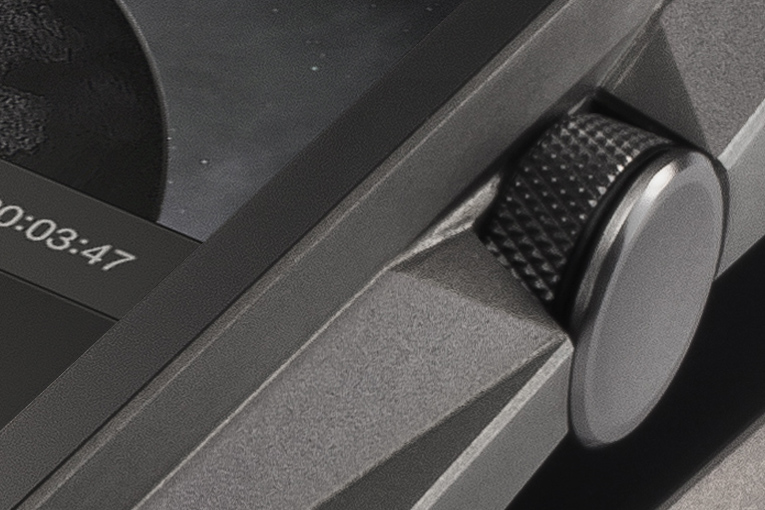 Chandos has been making a series of 24/96 recordings of the BBC Philharmonic Orchestra that are stellar in every way -- the playing is immaculate and exciting, the repertory is interesting, and the sound quality is on a par with MDG, Oehms, and Reference Recordings. In my opinion, many of the recordings conducted by Gianandrea Noseda are of reference class. I went straight to the third section of Liszt’s tone poem Die Hunnenschlacht, in which the full orchestra alternates with pipe organ playing mezzo-piano (24-bit/96kHz FLAC, Chandos). The recording was so clean and transparent that I could follow any orchestral line I chose, yet the tuttis had undeniably majestic impact. I imagined that if Liszt were alive to hear it, he’d approve.

The AK380 came preloaded with many albums and tracks processed at high resolution, including Michael Jackson’s Bad (24/48 FLAC, Columbia). I’d never heard this album sound so clean. All of Jackson’s little inhalations and joyful squeaks, so irritating to some and so pleasing to many, were right there, properly placed in the mix. There were no cover-ups. In the title track, I could hear every organ riff and percussion variation and the chorus, all with uncompromised clarity.

The AK380 also performed admirably with CD-quality material, too. The review sample included Echoes: The Best of Pink Floyd; the absolute purity and clarity of this album was like hearing it for the first time. Breathtaking. 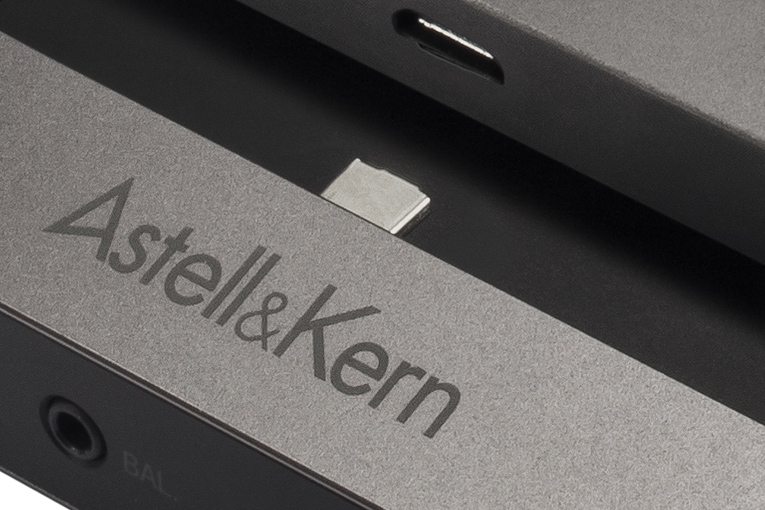 Also preloaded was Steely Dan’s Gaucho, in a DSD (2.8MHz) version. The AK380’s DACs revealed a master tape that, though analog, seemed to have all the clarity and impact of the high bit and sampling rates possible with more recent recordings. Voices were clean, percussion sizzled, and horns had perfect tonality. And the entire mix was perfectly balanced, as is to be expected from Steely Dan. A&K also provided a 24/96 version of Gaucho. It sounded just as clean, and even warmer and a bit more solid overall. I’m not a huge fan of DSD, and this PCM mix proved that PCM can sound every bit as good. Of course, I have no information about the preparation for each transfer, so much of my perception could have been manipulated. But that’s the difference I heard, however it was achieved.

I listened to a lot more music, and with each new track was astounded anew at how good it sounded. I think it was the AK380’s extreme focus, clarity, and transparency, with no loss of warmth, that pulled me in. In short, the AK380 provided sound quality that ranks at the top of the ladder for portable media players. Of course, any audio product is only as good as what you feed it -- but the AK380’s specs make it possible, and worthwhile, to feed it the best.

In my opinion, Astell&Kern’s AK380 earns and deserves its moniker of flagship. And with updates easily installed, and accessories that expand its capabilities (in addition to the AK380 Cradle, there are an AK380 CD-Ripper and an amplifier), its excellence seems endlessly renewable. I wish it were a little smaller, but as technology progresses, I’ll bet A&K will make it so.

Is the AK380 worth $3499? Is a Jaguar or a Cadillac worth its high price? Yes and no. There’s no question that the A&K is the best portable media player around, but as for how much the best should cost, you’ll have to decide. But I seriously doubt that the AK380 will disappoint anyone, even at $3499.