The Philips BT3500B is another Bluetooth speaker worth considering if you’re in the market for a smaller model you can carry in one hand from room to patio to porch. It has surprisingly good sound for such a little fella, and its retro design will appeal to many buyers. And at $79.99 USD, it constitutes good value for dollar. 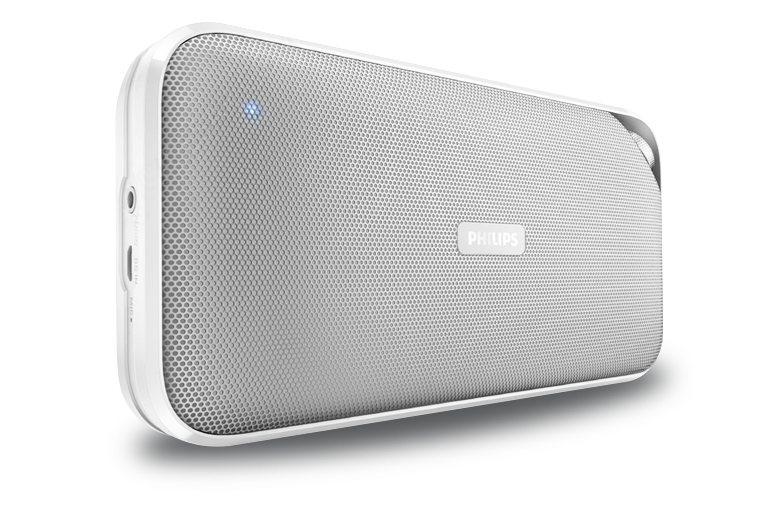 Inside a cardboard box is a transparent clamshell that lets the potential buyer see the entire BT3500B; there are also a USB-to-USB Mini charging cable and a fairly sizable, foldout instruction pamphlet.

The BT3500B itself weighs 1.1 pounds and measures 7.8”W x 3.9”H x 1.4”D, and appears to be made mostly of black plastic, including the honeycomb grille found on most models of its type. When I handled it, it felt not cheap but substantial -- but I wouldn’t want to drop it on a hard surface. 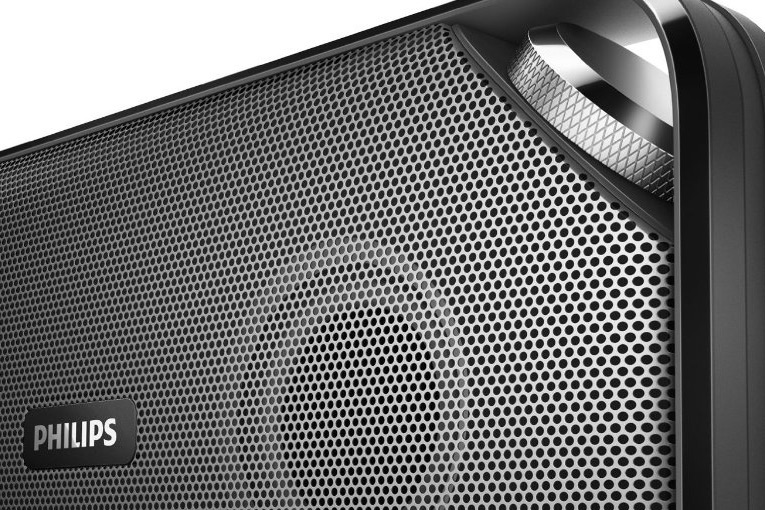 Dead center on the front, grille side is the Philips logo. The BT3500B’s upper right corner is missing; on the remaining edge surface is a prominent silver volume knob. This is the most retro of the speaker’s features, and is sure to be appreciated by users who are tried of using tiny sliders to adjust the volume. In the upper-left corner, behind the grille, red and blue LEDs indicate the status of the Bluetooth pairing and playing modes, the BT3500B’s Auxiliary playing mode, and battery charge -- about 40 minutes before its built-in lithium-polymer battery runs out of juice, the red LED starts to blink.

Along the top edge are two controls: a button for pairing, and for interrupting play to take phone calls; and a slider switch for selecting Off, Bluetooth, or Audio In. On the left edge are two ports: one for charging the battery, and a 3.5mm jack for plugging in a non-Bluetooth device. 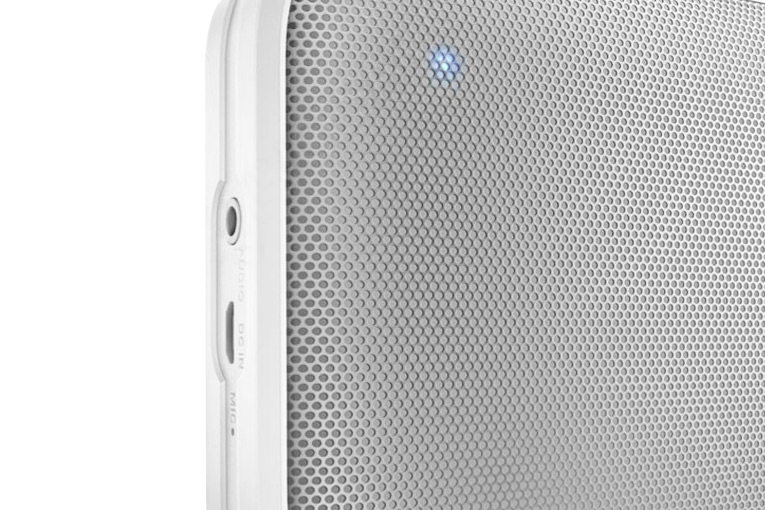 Folded into the BT3500B’s rear panel is a stand that easily unfolds to support the speaker in a tilted-back position, and to reveal technical information, the serial number, and the date of manufacture. Although Philips seems to assume that the BT3500B will mostly be used with its stand extended, the speaker is weighted to sit solidly on its lower edge without the stand.

The BT3500B was easy to pair. Just slide the switch on its top edge to Bluetooth and the blue LED behind the grille starts to blink. Select Philips on your device’s Bluetooth menu, and that’s it. If your device has Near Field Communication (NFC), just tap it on the NFC tag at the top of the BT3500B.

A battery charge didn’t seem to last long. Philips indicates five hours, but you’re unlikely to get that if you play the BT3500B at high volume levels. On the plus side, it took only one-and-a-half to two hours to fully charge. Range of wireless use was 20’ to 30’, depending on line of sight.

I found it easy to carry the BT3500B in one hand. You could also attach a strap to the corner bar above the volume dial. The BT3500B has two 2" drivers powered by a 10W amplifier.

The Philips BT3500B could play amazingly loud -- I was able to drive myself out of my office with it. The full-bodied sound of the Suisse Romande Orchestra playing Beethoven’s Symphony No.5 under the direction of Ernest Ansermet (16-bit/44.1kHz ALAC, Decca) was most impressive -- the BT3500B had good dynamic range for such a small device. Still, the Philips proved to be mostly a midrange speaker: its highs were crisp, often aggressive, and its bass was merely decent. Voices, such as Art Garfunkel’s in the title track of Watermark (16/44.1 ALAC, Columbia), had tangible presence. Richard Harris, singing the same song on his The Webb Sessions 1968-1969 (16/44.1 ALAC, Raven), had the same degree of presence while sounding absolutely different, showing that the BT3500B could reproduce voices with some nuance and detail. In short: a reasonably accurate midrange, considering the device's size and price. 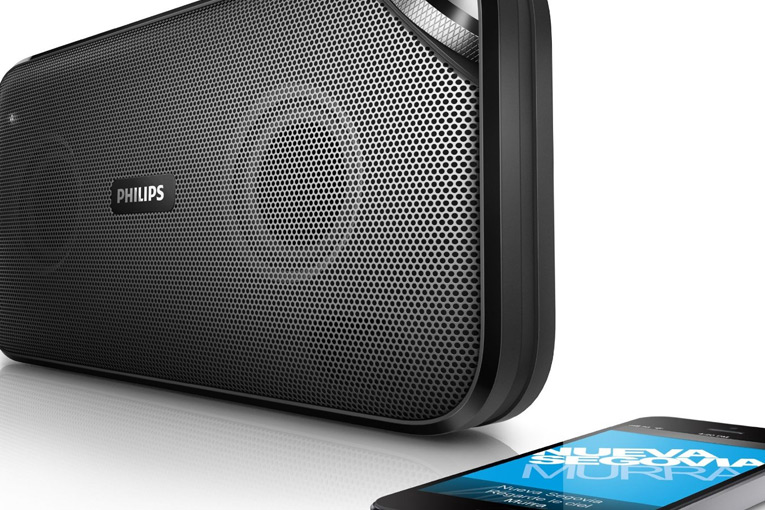 Though the BT3500B’s highs could be quite bright, they weren’t overtly distorted -- the BT3500B’s anti-clipping circuitry really worked. I suspect that, because of this, most buyers will tend to play the little Philips too loudly at first, before they learn to back off the volume for better sound.

The Philips B3500B is a small speaker that combines Bluetooth connectivity with a slightly retro style that should please many listeners who like a midrange-centric sound. You can spend more for a bigger speaker and better sound, but the B3500B can be found in Walmart or at Amazon.com for under $70, which makes it good value for dollar.