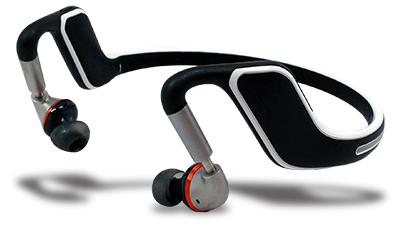 Because many of the new products debuted in January, at the 2014 Consumer Electronics Show, are just now starting to ship, this month I again went shopping. I spotted the Motorola S11-HD ($99.99 USD) earphones and was intrigued. The somewhat similar Motorola S-10 was the subject of my second review for this column, two years ago. Had Motorola taken to heart my and others’ reviews and made some improvements? The answer is largely yes -- but only by ignoring the most important thing.

Inside the S11-HDs’ box is a transparent case and inside that are the earphones themselves, three extra pairs of eartips (each of the four sets is a different size), a very short (6”) USB-to-Micro-USB charging cord, an additional, inner headband for a snugger fit, and an instruction manual.

The S11-HDs are made of plastic and rubberized material, and are very light -- 1.4 ounces on my scale -- but appear to be fairly sturdy for normal use. The headband is flexible, but unlike in the S-10, there are multiple adjustments -- for example, the earbud stems rotate. The eartips are easy to put on and remove from their posts, and seem durable. I did a lot of experimenting, but the eartips seemed to take it well, without stretching or tearing.

The S11-HDs I bought were Black (also available in Turquoise, Lemon, and Lime), with control buttons and trim in copper-orange. The right ear loop contains a power/pairing button and a rocker control for volume up/down. In the left loop is a single pushbutton that serves many purposes, depending on how many times it’s pushed: pause, skip forward, skip back. You can even use this button to change the earphones’ equalization: hold it down until you hear a voice prompt. In a resting position, the S11-HDs measure 5.5”L x 5”W x 2.25”D.

Charging was relatively simple, though the extremely short charging cord required that I reconfigure some other devices also being charged. There’s no adapter for plugging into AC. You’ll have to provide that yourself. One unique charging feature of the S11-HD is that charging it for only five minutes gives you an hour of play. Motorola claims that a full charge gives you seven hours of phone use, six hours of music, and six days in standby. Like most Bluetooth earphones, the S11-HD can receive phone calls, though I didn’t use this feature.

The S11-HD’s controls are a big improvement over the S-10’s. The older model’s controls were positioned so that when you pressed them, you drove the eartips further into your head -- not pleasant. Using the new controls, you don’t press inward at all -- and having only a single control on each loop makes operating the S11-HDs simple. 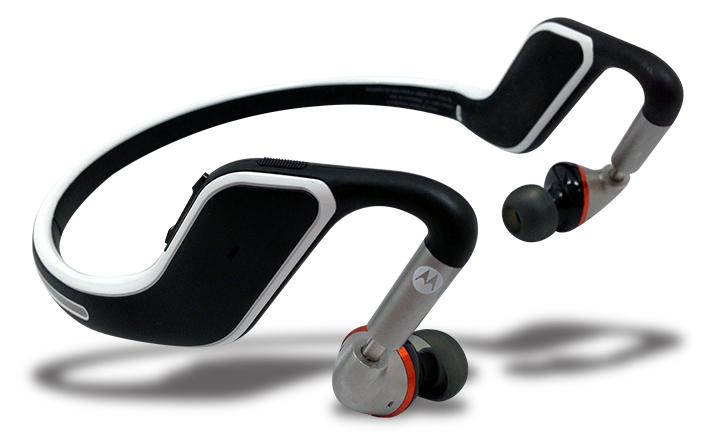 It took a little while to get used to putting on the S11-HDs. I found it best to loop them over my ears, then pull the earbuds outward and position them properly in my ear canals. I ended up using the tips already installed -- they gave me the tightest seal and thus the best bass. But everyone’s ears are different -- to get the best results, it’s important that you try all the tips. I found that the Motorolas stayed snugly on my head without use of the optional elastic inner band, but I ended up using that too, for a super-secure fit -- I could do my entire gym routine without the S11-HDs ever coming loose. They were very comfortable, and Motorola says they’re sweat-proof, which seemed to be true.

The S11-HDs paired quickly with my iPod Touch, and the useful range seemed somewhat greater than with other Bluetooth earphones. I was able to roam more than 30’ away and still maintain a connection.

There are so many functional things to like about the S11-HDs that I hate to report that the sound was not up to par. I put on “Opera Singer,” from Cake’s Comfort Eagle (16-bit/44.1kHz ALAC, Columbia), which features light clicking percussion with guitar and trumpet entering later, all over lots of roaming bass. Though the music is a little complicated, the recording is transparent and detailed -- but not through the Motorola S11-HDs. The sound had little presence or focus, and thus no punch. Transparency should have prevailed, but “Opera Singer” sounded cloaked. Overall, the S11-HDs had a muted quality, with truncated highs and a depressed midrange. There was enough bass, once I found the right tips and made the adjustments, but not the kind of thumping bass you need for a workout. Motorola offers three EQ settings. I found only the middle one tolerable: It upped the volume quite a bit and provided more bass, but not great bass. The other two settings provided little bass at all.

Those uncritical of sound quality will perhaps be OK with the sound of the Motorola S11-HDs, but audiophiles will find them unacceptable. That’s too bad, as the features and design are such great improvements over the S10. But somewhere along the way, good sound got lost.