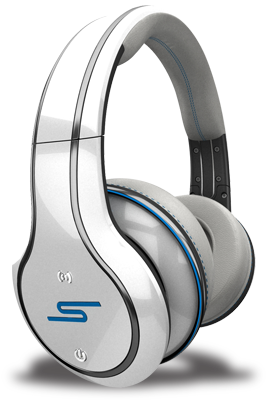 Celebrity headphones still seem to be on the rise. You can’t go to a mall CD shop without tripping over the Beats by Dr. Dre or the Soul by Ludacris -- and now there are SMS Audio’s Sync by 50 models. The “50” refers to popular rapper and entrepreneur 50 Cent, who not only endorses this line, but claims that it’s been designed to suit his own tastes.

My guess is that almost 100% of those who buy these ’phones are paying as much for status as for sound. If you use the Sync by 50s on your train or bus commute or while walking to work, the sizzling blue S on each earcup blinks to let people know your celebrity allegiance. How much are you paying for that status, and what do you get for it?

The Sync by 50s ($399.95 USD) come wrapped in awesome packaging. The large outer box, which bears photos of the ’phones and of 50 Cent wearing them, measures 10” x 10” x 5.25”. Inside is a cardboard box colored an appealing aqua blue. One side of it lifts to reveal a clamshell holder of blue plastic, which in turn holds the hard-shell carrying case. This case is unique in that it carries the Sync by 50s as well as everything that accompanies them: wired microphone cable, 3.5mm wireless transmitter, Micro USB charging cable, USB/AC adapter, airplane plug adapter, soft-touch cleaning cloth, owner’s manual, and brochure.

The case zips up and seems durable. Playing into the idea of status, it’s not something you’re going to be able to tuck away somewhere and forget. It has indents for carrying handles at the top and four feet, so it can stand upright. (Someone has said it looks like a slice taken out of a bowling-ball case.) Just by carrying the case around, the buyer will make a statement.

The Sync by 50s looks as impressive as their case. They’re big -- about 8”W x 7”H x 3.5”D. The earcups are 3.25” in diameter, and their padding is a full 0.75” thick. Inside each earcup is SMS’s “custom” 40mm driver. The ’phones’ construction is largely plastic, which might sound a little on the cheap side but actually isn’t. I was able to flex the plastic in almost any direction, and the ’phones always popped back to their original shape. The 50s are adjustable; each side can be independently extended six clicks. The 50s kept their positions solidly as rocks. The left earcup has two controls, one each at the top and bottom of that flashing S: sync/bass boost (top) and power on/off (bottom). Arranged around the right earcup are four controls, one every 90°: volume up and down, and chapter skip forward and back. At the bottom of the left earcup are a 3.5mm cable input and a micro-USB port, the latter for charging. All buttons are labeled with symbols that protrude slightly; they can easily be operated by feel while the ’phones are being worn.

The dongle required to wirelessly transmit signals measures only 1.5” x 0.875” x 0.5,” so it’s a good thing it has its own little nesting place in the carrying case. On one edge of the dongle is a 3.5mm pin, and on the other edge is a Micro USB charging port and a tiny on/off switch. In the middle is a round button for syncing. Like the ’phones themselves, this has a (much smaller) blue S that blinks when it’s paired with the Sync by 50s.

The Sync by 50s are available in Shadow Black, Phantom Blue, Ghost White, and Silver Obsidian.

I had to extend both adjusters their full six clicks to get the Sync by 50s to sit comfortably. This left the center crosspiece resting comfortably against my head with little pressure; the headphones felt relatively comfortable, but not entirely secure. SMS advertises the Sync by 50s as being for runners and people on the go. I’d say a firm no to the former; these ’phones are just too big and cumbersome to wear while playing sports or working out at the gym.

Before use, the Sync by 50s and their dongle need to be charged up. SMS includes only one charging cord and AC adapter, so the two units must be charged one at a time: 90 minutes for the dongle, two hours for the ’phones, for a promised 17 hours of playing time before the next recharge.

First you turn on the ’phones and dongle, then hold down the sync/bass boost button on the headphones until the blue S flashes rapidly; then do the same with the dongle. Within 20-30 seconds they’ll shake hands, and the S logos will flash more slowly. The problem with this is that when you push down the dongle’s S button, your finger covers the S; you can’t tell if it’s flashing rapidly or not without removing your finger. I expect better attention to detail from a $400 set of headphones. The dongle’s on/off switch is also tiny, and its indicators are so small they’re hard to read. With use, you might learn which direction provides which function, but there will be some fishing around until the action becomes automatic.

The dongle connects, via its 3.5mm plug, to the headphone output of your computer, receiver, preamp, or personal listening device. I tried it with my home-theater system, as well as with my iPod Touch and Nano. With the latter, I was delighted to find that the dongle wasn’t much bigger than the Sony Bluetooth transmitter I normally use. 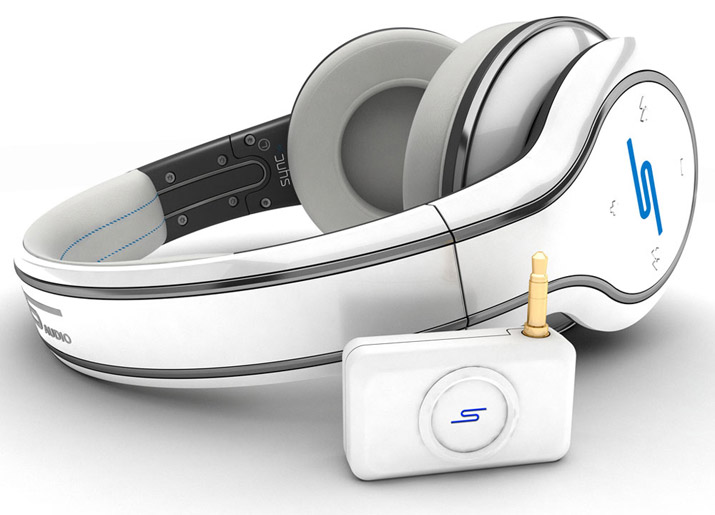 But the Sync by 50 isn’t a Bluetooth device. Instead, it uses Kleer Wireless Audio Technology, which is claimed to operate at 16-bit resolution. I found it troublesome. The SMS’s specs list 50’ as the range limit. I was never able to get more than 15’ away from the dongle. Line of sight is apparently much more critical for Kleer than for Bluetooth -- when I moved more than two rooms away, or outdoors, the music stopped the minute something came between me and the signal source.

I wonder why SMS chose Kleer Wireless -- even the Sync by 50s’ manual lists a whole page’s worth of Kleer’s limitations. My guess is that most people will use the Sync by 50s paired to iPods, in which case you can keep everything on your body. When I did that, I had no dropout problems.

Because the dongle plugs into a headphone output jack, the volume controls of the transmitting unit and the Sync by 50 both remain in play. While listening from my home-theater system’s Yamaha A/V receiver, which I use as a preamp, I found that I had to turn it way down, and use the Sync by 50’s control for fine adjustments. Note that the chapter-skip buttons won’t work using this dongle. SMS promises to soon make a dongle with a multi-pin plug that will connect to Apple devices. Then you’ll be able to use the skip buttons and adjust your volume with the headphone controls. But you’ll have to pay extra for it -- around $79, I’m told.

The Sync by 50s can also be used wired and SMS includes a cable for that purpose. Connecting it will let you use its Call Answer/Audio Control button to skip chapters or to answer phone calls, though I didn’t test this function. Another feature I was unable to use was syncing headphones. SMS advertises that you can connect and sync up to four pairs of Sync by 50 ’phones. I’m not sure why you’d want to do this, but if you do, you can.

I didn’t expect much in the way of sound quality from the Sync by 50s, but was pleasantly surprised that most of the time they sounded quite good. They had solid bass, a fairly transparent midrange, and aggressive highs. Although SMS’s ads claim that the Sync by 50s are suitable for all kinds of music (and are pre-EQ’d as such), I suspect they’ve been optimized for rap. Not owning any rap recordings, I plugged into the home-theater system and listened to several Michael Jackson tracks. The bass was admirably solid, and Jackson’s voice was as clean as I’ve ever heard it through headphones, with all of his little quirks of squeakiness and breathing more audible than through my loudspeakers. I tried the sync/bass boost, and though that bumped up the bass a bit, it also unacceptably muddied the upper bass and midrange. There was plenty of bass without it, so I left it off for the rest of my listening.

Encouraged by what I was hearing, I turned to some classical music: pipe organist Michael Murray playing Couperin’s mighty Chaconne in G Minor, from Encores à la française (CD, Telarc CD-80104). I heard solid bass and pungent reed pipes, alternating with passages registered for more dulcet ranks. There was also a good sense of Boston Symphony Hall, where this disc was recorded.

Then I tried one of the grandest of grand operas: Boito’s Mefistofele, with Tullio Serafin conducing the Santa Cecilia Academy Rome Orchestra (ALAC 16/44.1, Decca). The finale, with Mefistofele and Faust vying in volume with the heavenly host (a huge offstage chorus, including children’s chorus), was impressive -- the solo voices were clean, the cacophony ordered, and the devil’s shrill whistles had remarkable presence without blasting my eardrums into dust.

And thence to jazz, and Karrin Allyson’s In Blue (CD, Concord CD 2106). The extended bass solo in the first track, “Moanin’,” didn’t have the focus I expected, but Allyson’s voice sounded splendid: a bit bright, with just enough edge. After listening to more recordings, I concluded that the Sync by 50’s forte was voices. It’s a little too punchy on top (depending on the recording, of course), and the bass, though always sufficiently deep and powerful, was sometimes not as well focused as it might have been. But I’ve heard few headphones that can beat the Sync by 50s in the reproduction of the human voice.

At this point I tried to listen to the quiet opening of Stravinsky’s Firebird Suite, as performed by Robert Shaw and the Atlanta Symphony (Hybrid SACD, Telarc SACD-60039), but was distracted by a fairly loud chug-a-chug sound. I thought the neighborhood kids were out on their four-wheelers again, but no -- it was my relatively quiet dishwasher. SMS advertises the Sync by 50s as having “passive noise cancellation,” but I found that these ’phones actually amplified many sounds. I noticed this unusual phenomenon only with quiet music, but in those cases it was fairly annoying.

I liked the SMS Sync by 50s. They’re comfortable and have good overall sound quality, especially with vocal music. But for a $399.95 pair of headphones, they have too many big and little problems -- the worst being the drifting Kleer signal and how little they masked outside noises -- for me to recommend them without hesitation.

This is where their celebrity value comes in. You can surely find wireless headphones that sound as good as or better than these, and that cost less, from such established headphone makers as Sennheiser. Some of those even fold up to a size that’s truly portable. But they don’t have the shock-and-awe star quality of the SMS Audio Sync by 50s. If that’s what you’re after, they deliver it. You can have your star status and, as a bonus, relatively good sound.