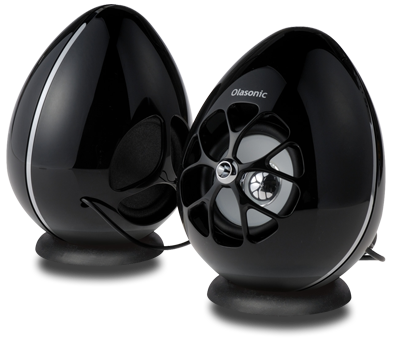 When I first saw photos of the Olasonic TW-S7s ($129.99 USD per pair), I immediately thought they’d probably be great little speakers for a laptop computer -- entirely portable. I was wrong about the portable part.

The TW-S7s come in glossy plastic enclosures tinted Noble Black or Brilliant White. Since their bottoms are round, they must sit in their stands (provided), which are made of a rubber-like silicone. Flat on the bottom and concave on top, each stand has over a hundred little bumps that hold the speaker steady. In the front of the speaker is an opening covered with a web-like grille that’s part of the entire enclosure; you can see (and touch) the drive-unit, which Olasonic calls a "full-range 60mm driver with an integrated high-frequency diffuser and a 55mm high-efficiency ferrite magnet." On the back of the speaker is another, smaller opening, also covered with a design molded into the plastic. Inside can be seen a 60mm passive radiator of expanded urethane.

The TW-S7 is shaped like an egg, so it was no surprise to find them cleverly packed in egg-carton material. But these compartments are for much bigger eggs than you’ll find at the supermarket: 5.5"H x 4.2"W x 4.2"D, with a very small footprint that will fit on almost any computer stand. The required cables are already hardwired to each speaker -- the only jack is the one that allows the left speaker to be connected to the right. Also in the box was an instruction manual, with the largest troubleshooting section I think I’ve ever seen. The right speaker, which contains the 10W+10W amp, weighs about a pound, the left speaker 14 ounces. Each stand is 3" in diameter and weighs just over an ounce.

How did they work?

The TW-S7s are a breeze to connect: Plug the left speaker into the right, then plug the USB cord from the right speaker into a USB port on your computer. Olasonic recommends a dedicated port; the speakers might not work well plugged into a USB hub.

The speakers are easily angled up or down on their bases, and stay there, provided you play them at a low volume; at high volumes, they vibrated so much that they walked themselves forward or back. The bases are one reason the TW-S7 seems intended to be used with a stationary computer. Others are that they have no input jack for an iPod or other MP3 player, and no headphone input. Given their weight and shape, they’re not easy to carry from room to room. Olasonic does make a carrying case for them, but they don’t sell it, reserving it only for special promotions.

As a computer speaker, the TW-S7 has some things going for it. The sexy design, the small footprint, and USB power are all pluses. But a 10W+10W amp is a lot of power for such small speakers, and made it difficult to adjust the volume. First, volume must be adjusted through the computer -- the speakers lack a volume control of their own. I was told that Olasonic designed the TW-S7s to work with Windows XP. Windows Vista and Windows 7 apparently have higher default audio output, which must be taken into account. I have Windows 7, and found that 30% on the volume slider was as high as I could comfortably go. Some musical selections would play a little louder, but most would distort horribly if driven past that point.

Though the TW-S7s did have more bass than most small computer speakers, that was also one of the problems -- it was usually the bass that distorted. I could watch the drive-units’ absurdly huge excursions when I drove them too hard -- which was just 40% on the volume slider. That over-excursion went for the passive radiators, too.

Using the suggestions in the manual, I finally found a volume setting that worked for most music. But having gotten the TW-S7s up and running, I found no type of music that sounded particularly good through them. They didn’t have a very natural sound at all, and most music sounded processed. The opening of the title track of Michael Jackson’s Bad (Apple Lossless, Epic) was flat as a flounder, with little presence. On the recording of Saint-Saëns Symphony No.3 with Paul Paray conducting the Detroit Symphony (CD, Mercury Living Presence 432 719), organist Marcel Dupré’s pedal notes in the second movement couldn’t be heard at all, and the full organ in the fourth movement was harsh and glaring. I thought perhaps chamber music would work, so I tried the Fine Arts Quartet performing Beethoven’s String Quartet No.7 (Apple Lossless, Everest/Vanguard). That was fine as long as only two instruments were playing; when it was all four, the sound got congested and harsh.

I finished up with a real bass test: "Moanin’," the opening track of Karrin Allyson’s In Blue (CD, Concord 2106). The introductory bass solo distorted until I reduced the volume to 22%, at which point it sounded anemic, with no presence. At this point, I wondered why anyone would make a speaker with such severe limitations. It makes no sense to have all that power if the drivers can’t handle it.

The Olasonic TW-S7s seem to be speakers designed to have everything -- good highs, good mids, good lows -- but are so compromised that they do nothing well. If you want to do any serious music listening, they won’t do -- and if you want "music everywhere," they aren’t for you at all. Unless you have room on your desk for a pair of bookshelf speakers, probably the only way you can get balanced, full-range desktop sound is from two small speakers and a subwoofer.

But if all you want is background sound, for the news and YouTube videos, the Olasonics should be fine. They certainly look great.