Bose is a legendary name in the world of audio speakers. The company has diehard fans. Having never experienced a Bose product firsthand, I determined that I should try one. In this case, it was the Bose SoundLink Color II. Though I found a few things to quibble about, this little speaker mostly lived up to the Bose hype. At $129 (all prices USD), it is a strong contender for purchase if you’re considering a speaker in its size category.

The Bose SoundLink Color II comes in a rather inauspicious box, with informative, rather than splashy, inserts. Once you take the cardboard wrapper off, you’ll see the speaker and find the charging cord (USB-to-Micro-USB) in a separate compartment. Also included are safety and warranty information and a virtually useless quick-start guide. However, you can go to the Bose website and find a full, multi-page owner’s guide, available in both an English and a multi-language version, that’s as thorough as the quick start guide is unhelpful. 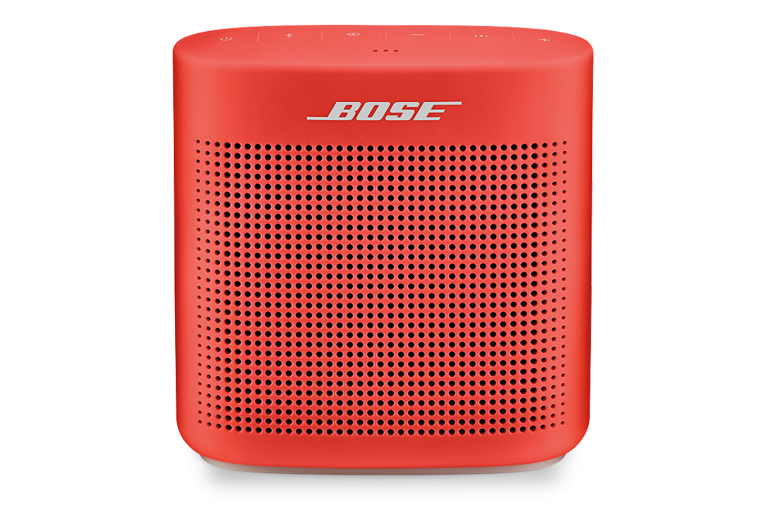 The SoundLink Color II measures 5.25″ high × 5″ wide × 2.25″ deep and weighs 1.2 pounds. Its entire body is wrapped in soft-touch silicone, which makes it easier to pick up. Its corners are gracefully rounded for a smooth look. It comes in four vibrant colors (hence the name), including Soft Black, Citron Yellow, Aquatic Blue, and Polar White.

Grille perforations cover three quarters of the front surface, which contains a discreet Bose logo; on the back, there is an additional small grille strip, and a virtually indiscernible Bose logo is embossed below it. Compared to other speakers, I must admit, I was impressed at this one’s modesty. The top, which contains the controls, seems to be made of a slightly softer version of the body material, while the bottom is made of a softer rubber that provides a stable base. On the lower right-hand side of the speaker you’ll find a 3.5mm auxiliary jack, and a Micro-USB jack for charging.

I think the overall discretion may have been carried too far when you consider the control-button arrangement. The six buttons are arranged in a straight row with embossed symbols that are very light in color and difficult to read in low light. They are not raised from the surface, so you must find your way by counting the actual number of buttons from left to right, at least until you get used to it. Backlighting would have helped greatly. The buttons, in order from left to right, are power on/off, Bluetooth pairing, input mode, volume down, multifunction, and volume up. The multifunction button allows you to play or pause, and skip forward or backward, depending on the number of times you press it. Since most manufacturers seem to have ditched the skip backward feature, this will be a welcome sight for those who need or want one on the Bose SoundLink Color II. There is a microphone, so the multipurpose control also allows you to make a call, answer or reject a call, mute a call, or switch between calls. 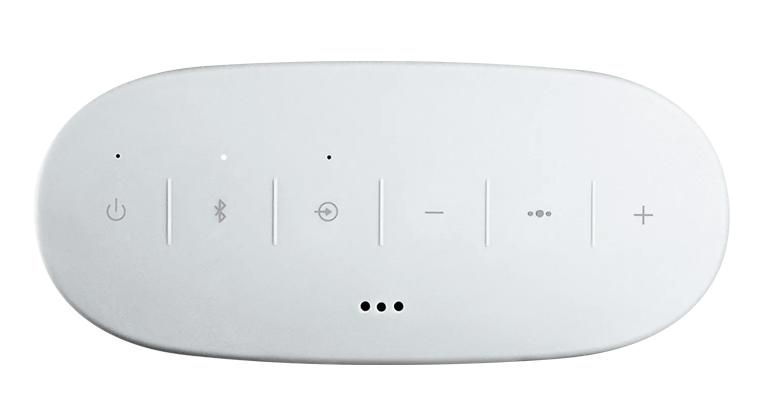 Bose is often very secretive about the inner workings of their speakers. I was unable to find the driver sizes, but Bose advertises that there are two opposing passive radiators. The amount of bass this little speaker produces would seem to corroborate that. The speaker itself is water resistant, not waterproof, so it can survive a light splashing; however if it rains heavily, you should find a way to protect it. Also, you should not under any circumstances submerge the speaker in water or take it into the shower.

Bose offers a free app that allows you to connect two speakers for dual-mono or stereo sound (you can also do this manually by pressing buttons on the speakers in tandem). The app will also allow you to switch between multiple mobile devices with a single swipe, disable voice prompts, change the prompt language, and keep the speaker up to date with the latest software. I was unable to use it with my iPod because it requires iOS 13.0 or above. The Bose SoundLink Color II will automatically shut off after 30 minutes, but the app allows you to disable this feature, too.

The Bose SoundLink Color II was very easy to use. It paired instantly (if your device has NFC capability, you can pair it just by tapping on the speaker’s top panel). Though it doesn’t have a carrying loop or carabiner, it was easy to pick up with one hand, given its size and light weight. It sat solidly on a flat surface and did not walk at all with heavy low frequencies. As mentioned, the control buttons are hard to find, but once you do, they have an admirable feel and click that lets you know you have issued a command. 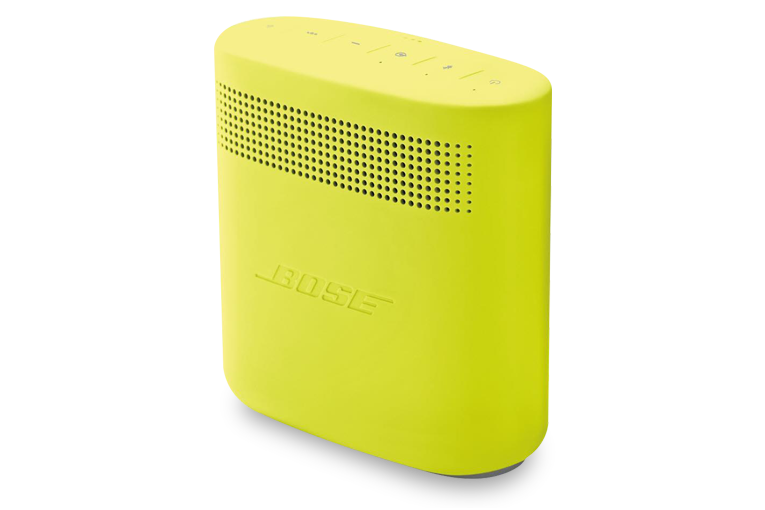 The speaker charged in about three hours with a USB-to-AC adapter and had a range of about 25′ in my cluttered home (Bose claims 30′, but I’m sure that’s only possible with an unobstructed sight line). The playtime was a little shorter than other speakers. Of course, this depends on the volume level, but at a relatively high level, I got about six hours of play time, not the eight that Bose claims.

This is where the Bose name lived up to its kudos. The sound was simply the best I’ve heard from any speaker of its size. It is tonally even from the top to the bottom of its frequency range, and there’s more (mid)bass than you might expect from such a small unit. I was particularly impressed with the highs, which had great presence and were silky smooth.

The sound was also clean and transparent and suitable for listening to almost any kind of music. It’s a good thing this speaker plays so loudly because I could, with certain music, drive it into distortion. This proved to be little problem, because I could just back off a few notches and it was still loud and clean. Overall, the Bose SoundLink Color II is a speaker that can be used both inside and outside. Considering the need to use it on a flat surface, inside is likely best. 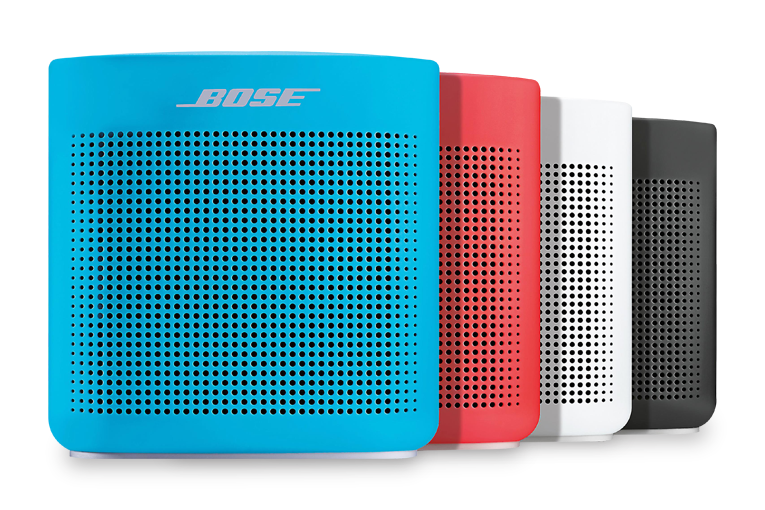 At the moment, there’s a hot new audiophile item out: a recording of Stravinsky’s Le Sacre du Printemps, with Paavo Järvi conducting the NHK Symphony Orchestra, Tokyo (24-bit/96kHz FLAC, RCA/Amazon Music HD). Järvi ekes out every detail of the complicated orchestration, and the clarity he and the engineers achieve is downright jaw-dropping. There’s a particular emphasis on the percussion, and for once, the tam-tam crashes can be heard distinctly, and they’re not just part of the melee. I chose this recording to focus on first since it’s such a great challenge. The Bose SoundLink Color II handled it amazingly well. Of course, the absolute terror the bass drum inspires was only heard in overtones, but the rest was rendered with impressive fidelity. Transients were all clean as a whistle and the full dynamic range could be easily tracked. A real winner, both for Järvi and Bose.

Next up, Barbra Streisand and Willie Nelson are both legends, artists who just seem to keep getting better with time. These seasoned professionals deliver an amazing duet in “I’d Want It to Be You,” from Streisand’s new album Release Me 2 (24/96 FLAC, Columbia/Amazon Music HD). Both singers have very nuanced delivery and this aspect of the recording came through splendidly on this little speaker. The instrumental mix is a little too heavy for me, but even that came through clearly, indicating that the SoundLink Color II can handle complex music. 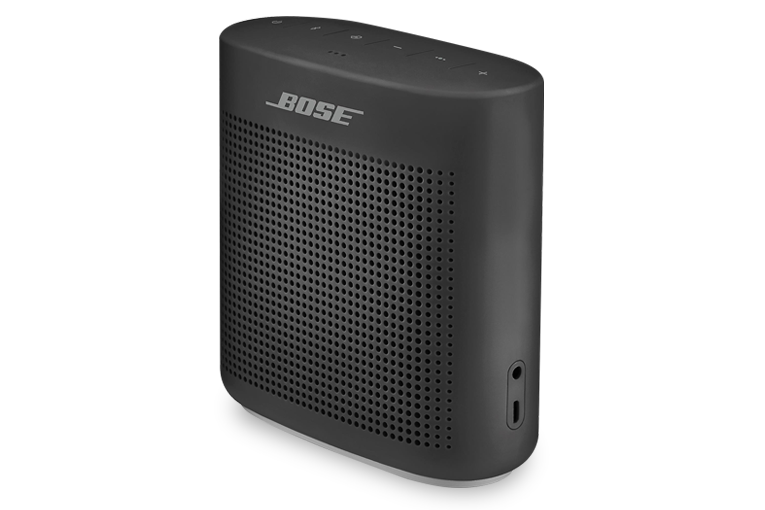 Dipping into the past with Fleetwood Mac’s “Second Hand News,” from their seminal album Rumours (24/96 FLAC, Warner Music/Amazon Music HD), I was once again impressed by the clarity of the vocals, strumming of the strings, and the steady beat of Mick Fleetwood’s drums. The cymbal strikes seemed a bit reticent, but this could have been a product of the recording mix or the stream. Either way, the track was still quite enjoyable.

If you’re looking for the best sound from a speaker in this price category, this little Bose model is your best bet. The Ultimate Ears Wonder Boom 2 and JBL Flip 5 are surely in the running, and both of them offer features that the Bose SoundLink Color II does not. You probably wouldn’t be disappointed with either of these, but if sound is your primary concern, and you’re willing to do without features like hanging loops, waterproofing, or easier-to-see controls, the SoundLink Color II is the speaker you want. It is easy to carry, pairs flawlessly, and the sound is simply amazing. You can’t go wrong with this one.