There’s no beauty contest for outdoor Bluetooth speakers, but if there were, JBL’s Pulse 4 would win. The cylindrical Pulse 4 has many LEDs distributed all over and around its single curved vertical/longitudinal surface that can distribute patterns of light through 360°. And it sounds good. It might seem costly at a list price of $249.95 USD, but it’s more than a portable Bluetooth speaker—many would consider the Pulse 4 a work of electronic art.

The Pulse 4 comes in a cardboard box tinted JBL’s signature orange and emblazoned with images of the speaker and the JBL slogan “Dare to Listen!” Inside are the snugly packed speaker, a USB-A-to-USB-C charging cord, a quick-start guide, and warranty and safety information. 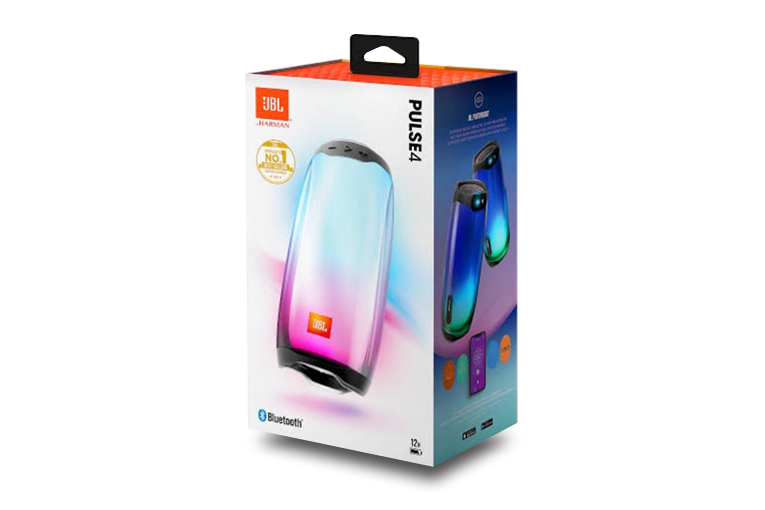 A cylinder of transparent plastic, the Pulse 4 is available with black or white endcaps of rubberized plastic. The front of the cylinder is indicated by a small JBL logo, the rear by a narrow vertical strip on which are the USB-C charging port and a battery-charge indicator. The speaker is 3.78″ in diameter, stands 8.15″H, and weighs a whopping 2.78 pounds. A single 2.25″ driver radiates sound from the top endcap through a fine-mesh grille and a large embossed JBL logo; enclosed in the bottom endcap is a passive bass radiator that fires downward through three scalloped ports. The overall build quality is solid, but I wouldn’t want to abuse the Pulse 4 and risk scratching or breaking its transparent surface.

The controls are arranged around the rim of the top endcap. In front are buttons for volume up/down and play/pause; the latter can be tapped twice to skip to the next track. In back, on the right, are buttons for power on/off and Bluetooth pairing. At left is a Party Boost button, for pairing the Pulse 4 with other JBL speakers that include Party Boost—two for true stereo, or up to 100 mono speakers—and a button for selecting the lightshow pattern. These patterns include Spiritual (floating blobs of color), Campfire (burnt oranges and yellows that really do look like a campfire), Equalizer (bursts of light shoot from bottom to top, in rhythm with the music), and Wave (colors that float in and out in rolling bands). The Customize setting’s default is sudden, strobing bursts of color, but it can also be programmed using JBL’s free Portable app: You can change the color and/or brightness of any of the patterns. The app also permits remote volume control. The lightshow can be turned off entirely by depressing the app’s Color button, which can also be used to create a near-white light strong enough to be used to look for things or to find your way at night, or perhaps to read. 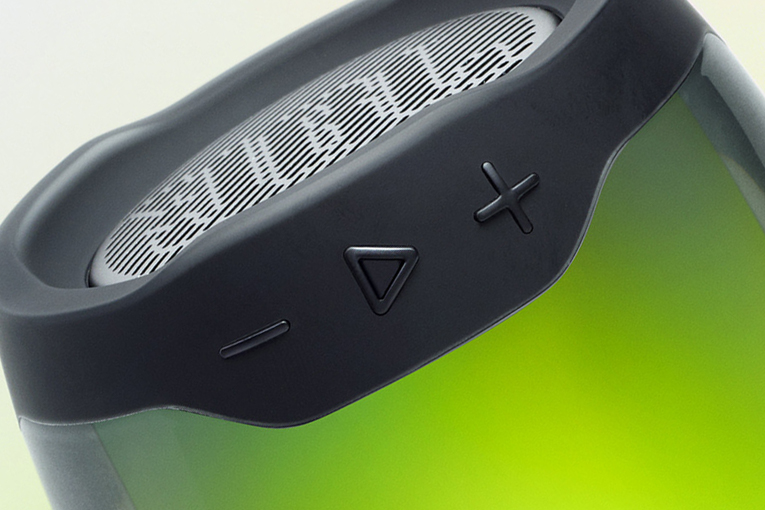 The Pulse 4 can connect to other speakers only if those speakers are also equipped with Party Boost—older JBL models that use Connect won’t work with it. The Pulse 4 has no auxiliary input jack, can’t be used as a phone to receive or transmit calls, and is not Wi-Fi capable. It’s strictly a Bluetooth speaker.

The initial Bluetooth version is 4.2, though a recent firmware upgrade, downloadable using the app, brings this up to 5.1. The dustproof/waterproof rating is IPX 7. JBL specifies the Pulse 4’s frequency response as 70Hz-20kHz, and a full battery charge as providing “up to 12 hours (varies by brightness & volume level and audio content)” of playing time. JBL says that fully charging the battery should take 3.5 hours, but I found it needed five hours, after which it gave me some ten hours of play at a medium volume level with the lightshow on. The effective range of Bluetooth operation was about 25′.

Because the Pulse 4 lacks any sort of handle, it must be grasped with a palm wrapped around its flank or cupped over an endcap, something its weight made a bit awkward. Those with smaller hands will probably want to use both to carry this speaker. 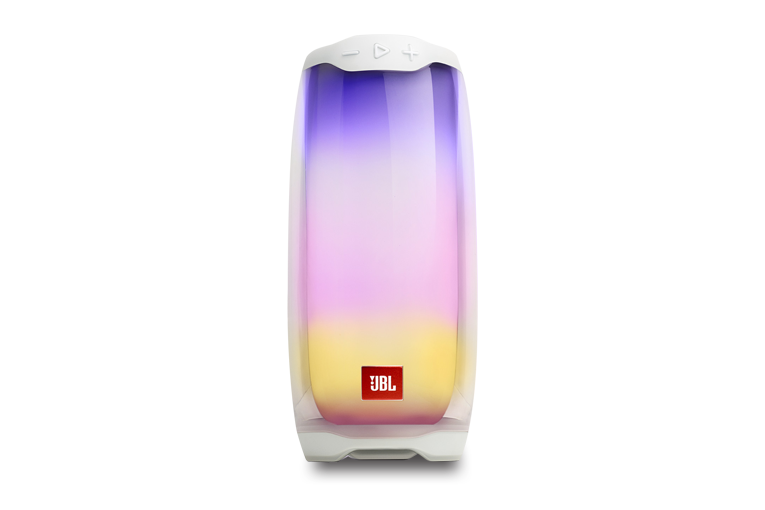 The Pulse 4 was easy to use. It paired instantly with my Apple iPod Touch, and all its controls worked as promised. The buttons have a particularly satisfying crunch that reassured me that the command had been sent. JBL’s usual swoosh sounds, signifying that one of their models has been turned on or off, were accompanied by visual swooshes: changing patterns of color moving from bottom to top (on) or from top to bottom (off) of the display. When the volume is raised or lowered, bands of color respectively rise or fall.

I found the lightshows mesmerizing—my favorite was Campfire. The presets were fine, but I also used the Portable app to experiment with colors and brightness. I tried a blue Campfire and a green, but those were just too bizarre. The Custom setting lets you adjust almost everything about a pattern: color, speed, shape, location. Another neat feature I was unable to try allows those with smartphones to take a photo of a color and add it to the menu of display choices. 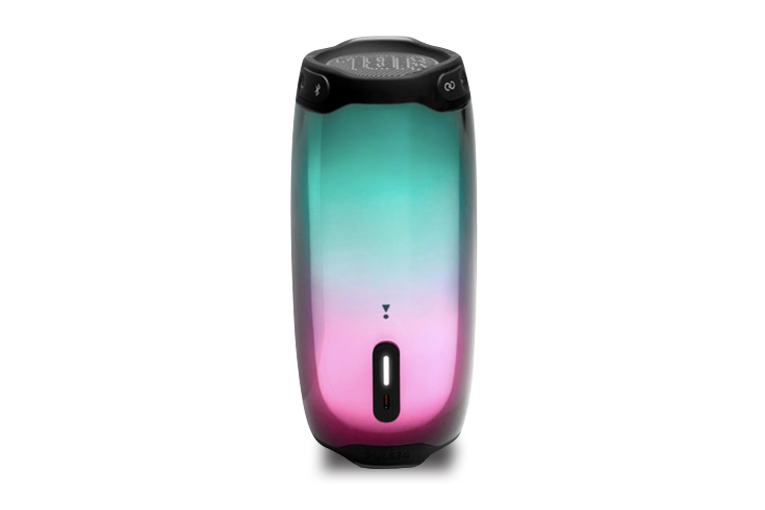 I splashed the Pulse 4 in the shower and dumped it in the sink. It held up fine. It floats, so if you knock it into a pool or lake it won’t sink to the bottom, which would probably damage it—a device with a waterproofing rating of IPX 7 is guaranteed to work only if submerged no deeper than 3′.

My little screened-in back porch overlooks a stream, and beyond that the woods—it’s a tranquil place where I can enjoy the sounds of nature and, on a good summer night, catch a cool breeze. I used the Pulse 4 there in normal Campfire mode, playing some of Debussy’s Préludes for solo piano. The result was quite satisfying. JBL emphasizes the Pulse 4’s rockin’ party abilities, but I found it equally effective at visually and sonically encouraging and supporting quieter moods.

The Pulse 4’s sound was surprisingly solid from the bottom to the top of its frequency bandwidth. Its passive bass radiator put out bumpin’ good bass with rock and pop tunes, and its single upward-firing driver produced a smooth midrange and lively but nonaggressive highs. It was loud enough for a small party, and the sound, like the lightshow, radiated through 360°—everyone got an equal opportunity to hear and see it. 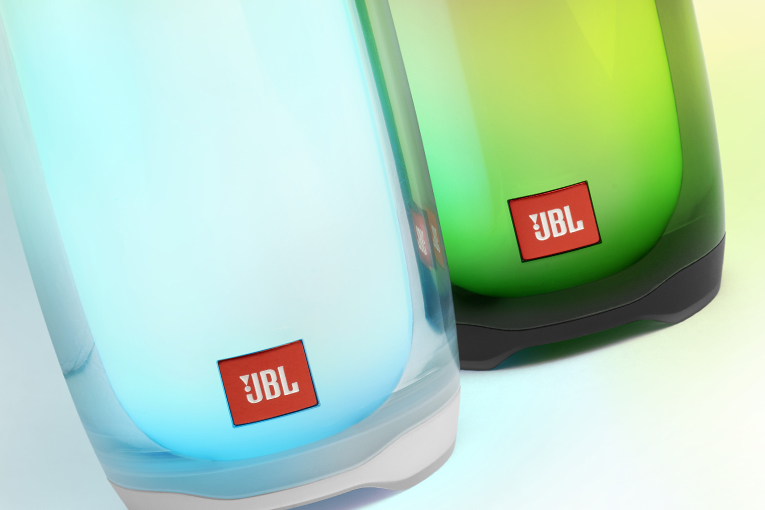 Those Debussy Préludes (Book I) were performed by Vanessa Benelli Mosell (16-bit/44.1kHz ALAC, Decca). The sound of her piano was very transparent, yet rich and full. All passages, whether bombastic (rarely), or shimmering (mostly), sounded very natural through the Pulse 4.

Most party speakers, including this one, are hyped as good reproducers of rock, but I’ve found that they can work very well for other music. You can plan an elegant Renaissance party by playing Praetorius Dances, a new recording of dances by Michael Praetorius, performed with elegance and energy by Capella de la Torre (16/44.1 ALAC, BR Klassik/Deutsche Harmonia Mundi/Sony Music). The festive sounds of krummhorns and sackbuts are balanced by the more delicate tones of recorders, lutes, and a few voices. Through the Pulse 4, all instrumental and vocal colors were accurately reproduced, with great presence and crisp definition. As for the lightshow, I found that Spiritual or Wave worked best—but for me, Campfire worked for everything. 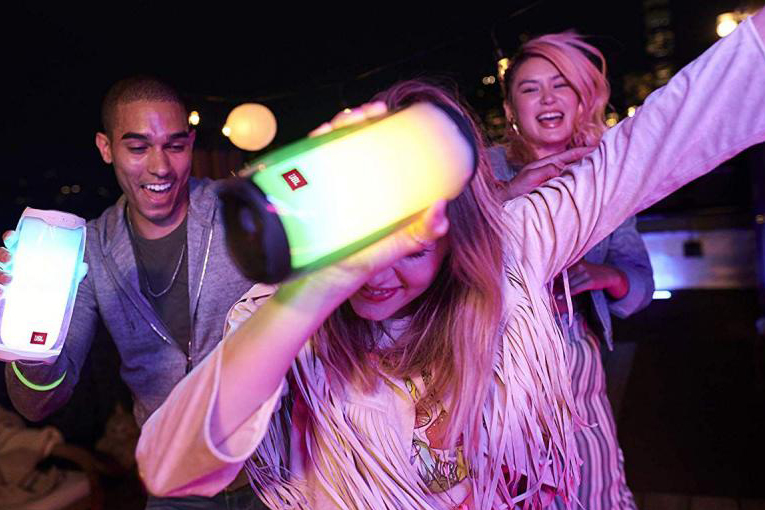 I tried some rock as well—the title track of Duran Duran’s Astronaut (16/44.1 ALAC, Sony BMG). The opening guitar licks were hard as nails, as they should be, with great presence. The Pulse 4 pumped out surprising amounts of bass—I could easily feel it when I laid a hand on the surface on which I’d set the speaker. As more instruments and voices entered, however, the sound got a bit cramped and close. I suspect that adding a second Pulse 4 would have alleviated the congestion, and given me true stereo sound to boot. Still, the Pulse 4 passed the test of mono rock, if not with flying colors.

JBL’s Pulse 4 is portable in the sense that it’s a wireless speaker that’s easily carried from place to place. But it’s too heavy to toss in a gym bag or hang from a belt loop, and to take full advantage of its sonic and visual capabilities it must be placed on, say, a patio or picnic table. However, such placement could easily be poolside or lakeside—the Pulse 4 is, after all, waterproof. And while its sound is quite good, many will also want it for its hypnotic lightshows, which can be selected and even customized to the user’s taste. If you want a speaker that looks good while sounding good, you can hardly go wrong with the JBL Pulse 4.