JBL is sticking with its original models, tweaking them and assigning them new version numbers. A recent example is the Xtreme 3, the latest version of the original Xtreme, a medium-size Bluetooth speaker primarily designed for partying. It has USB-A and USB-C ports for charging USB devices, and an improved adjustable strap. Specified IP67, it’s waterproof and dustproof and, with one big caveat, has robust, well-balanced sound. But it’s pricey at $349.95 USD. (However, JBL’s website often offers even new models at 50% off.) 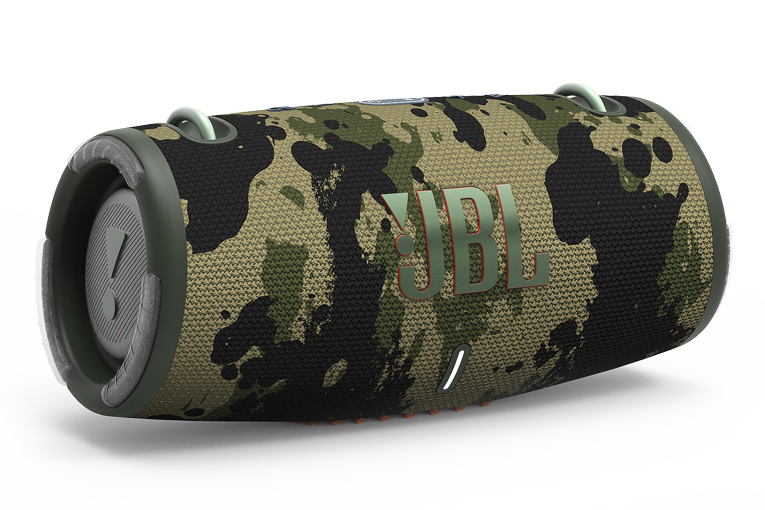 The Xtreme 3’s colorful, flashy box, emblazoned “dare to listen,” has a convenient handle. Inside are the speaker, its power cord and shoulder strap, a safety sheet, a warranty card, and a Quick Start Guide with the specs listed in 24 (!) languages. 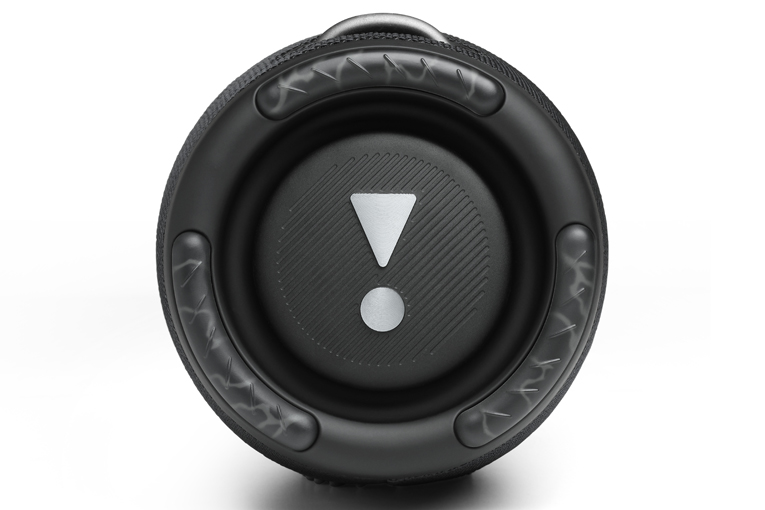 The Xtreme 3 is covered with fine-mesh cloth. Each endcap is ringed with three rubberized strips to give the speaker a sure stance when it’s stood on end; on the bottom are ten straight strips of the same material, for steadying the speaker when it’s positioned horizontally. On the back is a sealed port—pop its hatch to expose the USB-A and USB-C ports, and a 3.5mm jack for the connection of a wired device. The Xtreme 3 can act as a power bank, charging other devices via its USB jacks; the USB-C jack is also used for charging the speaker itself.

On the front of the Xtreme 3 is a huge JBL logo outlined in JBL’s signature orange. Below this is a thin column of blue LEDs indicating the status of the battery charge. On the top of the speaker are two heavy metal loops for the strap, and between these are the control buttons: power, Bluetooth pairing, volume up/down, play/pause/skip, and party boost, which allows two Xtreme 3s to be paired for stereo or multi-mono sound. Only the power and Bluetooth buttons are backlit. An audible swoosh accompanies the pressing of power on and off. 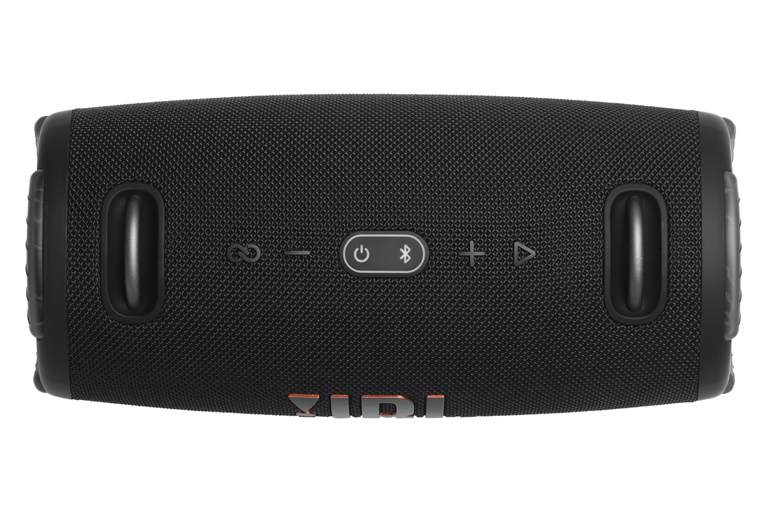 The strap seems exceptionally durable. It’s ribbed at the top, to make it unlikely to slip off the shoulder. The hooks swivel, making it easy to keep the strap from twisting.

JBL specifies the Xtreme 3’s frequency range as 53.5Hz-20kHz, its signal/noise ratio as >80dB, and its Bluetooth version as 5.1.

The JBL Xtreme 3 can be plugged into AC power or run on its internal battery. Plugged into the wall, it provides slightly more volume output. However, I tested it primarily as a portable speaker, in which case it depended entirely on a full charge of its lithium-ion battery.

I found the Xtreme 3 awkward to handle. It didn’t fit comfortably in my hand, and I didn’t like the shoulder strap—the speaker slapped against my side. For the most part I left the speaker in one position, so this didn’t matter too much. But a portable speaker this big and heavy should have a handle and a strap. 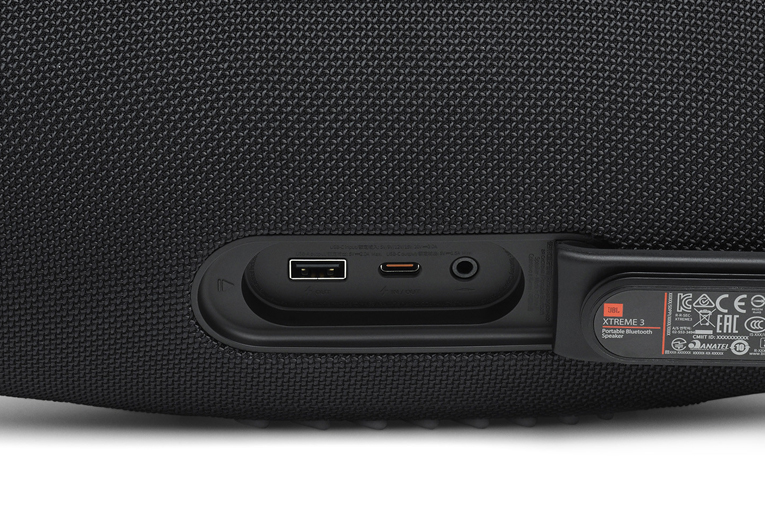 The controls worked well. The buttons were easily depressed, and emitted a solid click. The range of Bluetooth operation in my somewhat cluttered house was about 25′. I’m sure it would be much greater in a setting with fewer obstructions. After making sure the rear port was sealed, I ran it in the shower for 15 minutes to check out the waterproofing, and it came out fine. The music-playing time on a full battery charge at least met JBL’s spec of “up to 15 hours (dependent on volume level and audio content)”: I played the Xtreme 3 three hours a day for a week, and still had power to spare.

At a reasonable volume level, the JBL Xtreme 3 offered well-balanced sound for so small a speaker: sparkly highs, a mellow midrange, and rocking bass. When I turned up the volume to full blast the highs grew strident; when I turned it down too much, the highs were sucked back into a black hole and disappeared—but either way, the bass and midrange were unaffected. Clearly, this speaker is designed to be played loud but not too loud, and soft but not too soft; within that window, it excelled. I found the sweet spot at three clicks below full volume.

At that sweet spot in the volume range I heard no distortion, and for a portable Bluetooth speaker, the presence and definition were superb. Distance, too, had some bearing on the overall sound. The Xtreme 3 sounded best from a distance of at least a few feet. To be consistent, I did most of my listening about 10′ from the speaker, with its volume set at the sweet spot. The Xtreme 3 produced actual but minimal stereo separation—after all, the two channels’ drivers are only inches apart.

The Beatles’ Abbey Road (24-bit/96kHz FLAC, Apple/Capitol/Amazon Music HD) is the Fab Four’s “bassiest” album, and through the Xtreme 3 Paul McCartney’s bass lines came through with force and exceptionally crisp definition. I could hear not only the sonority, but the attack of each note. Upper-frequency details were just as powerful, and in the midrange, the voices of McCartney and John Lennon were smooth and well-defined. A real win for this speaker. 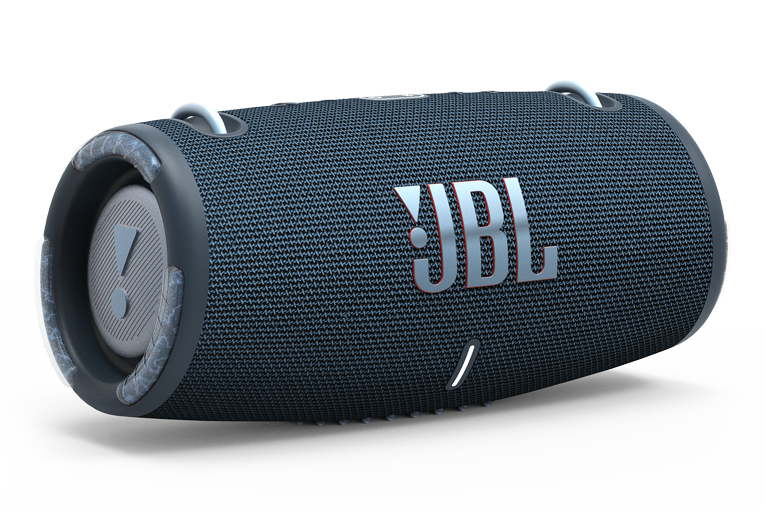 The original soundtrack album for Grease (24/48 FLAC, Polydor/Amazon Music HD) has pulsing bass, pungent background vocals, and instrumental licks supporting the voices of John Travolta, Olivia Newton-John, and the rest of the stellar cast. The Xtreme 3 pumped out impressive, well-focused bass and razor-sharp highs. The voices sometimes sounded a bit strained, but this was no doubt due to the original recording microphones and not the fault of the JBL. I really felt like dancing to the more upbeat numbers.

“It’s a Raggy Waltz,” from Dave Brubeck’s Time Further Out (16/44.1 FLAC, Sony/Amazon Music HD), is a funky little number often overlooked in conversations and writings about Brubeck. Through the Xtreme 3, it was a mixed bag. Eugene Wright’s double bass had good definition, as did Joe Morello’s percussion and Paul Desmond’s alto saxophone, but Brubeck’s piano sounded a bit amorphous and too resonant. This was less of a problem when I listened at a greater distance from the speaker.

JBL advertises the Xtreme 3 as a portable speaker, but I found it difficult to move around without the shoulder strap. I imagine most buyers will plug it into a wall outlet or use its battery, and move it only when needed—for, say, an outdoor pool or patio party. Still, it boasted impressive sound, and played loud enough for most uses, even if the high frequencies were strident at loud volumes, and disappeared altogether at low volumes. If you want something that can do what the JBL does well while also serving as a good speaker for background and party-level volume levels, you’ll need to look elsewhere, perhaps at other speakers in JBL’s line.