For a time, about a decade ago, I had this fantasy of promoting a concert that would feature an all-star band of top-flight musicians who held PhDs. As it happens, it wasn’t as far-fetched as it seems; pianist Vijay Iyer and saxophonist Rudresh Mahanthappa have already collaborated, and the French Moutin twins, drummer Louis and bassist François, would make a great rhythm section.

You don’t need a postgraduate research project to prove that there have always been a lot of very intelligent people who have excelled at improvised music. Just look at the saxophonists, Charlie Parker, John Coltrane, and Anthony Braxton. All three likely qualify as geniuses, even if Braxton is the only one who bridged the gap between performance and academia. What each of these reed players understood was the complex, mathematical relationship between musical notes, both individually in a melody and as harmonic components.

Other musicians have delved into the math of rhythm and the science of music therapy. 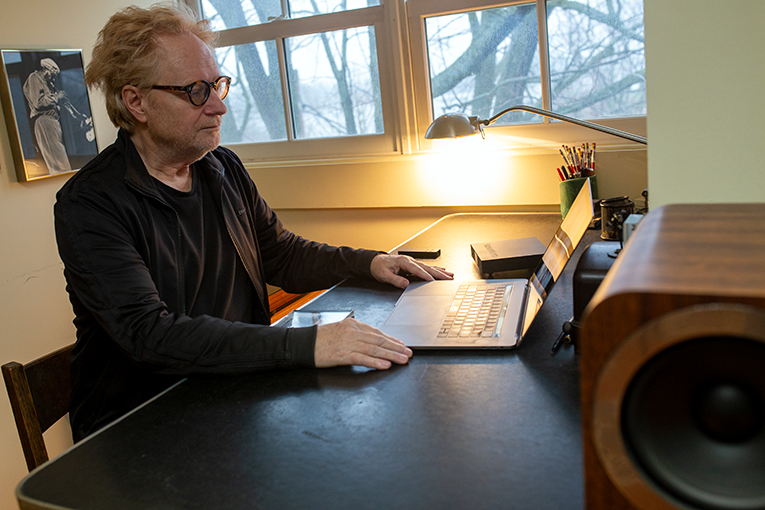 Contemporary music composer and violinist Christopher Otto is also a mathematician, and while he’s not a jazz musician he exists in the same realm as his sometime collaborator, composer-saxophonist John Zorn. Both work with the languages of musical improvisation and contemporary classical music. Speaking of Otto, Zorn has said: “Chris Otto is one of those ultra-rare musicians who combine complete technical mastery with the profound depth of feeling of an old soul.”

Otto’s own music, which gets its full-length debut on Rag’sma (LP, Greyfade 003), is currently constructed using the principles of just intonation, the practice of tuning musical intervals to whole-number ratios. According to the album’s release notes: “Unlike irrational, equal-tempered intervals [in standard 12-tone equal temperament], these rational intervals, like 2:1 (octave) and 3:2 (pure fifth), create cycles that align periodically.”

In just intonation, one particularly complex interval—4375:4374—is known as the ragisma, which Otto took as his inspiration for his debut recording. Rag’sma presents two variations of the same piece: one that combines two overlapping iterations of the JACK Quartet (called Q1 and Q2) and another (Q3) that adds a third layer of the string quartet. In performance, the first two parts would be prerecorded and the Q3 quartet would play live. On the vinyl version of Rag’sma, both versions are included. 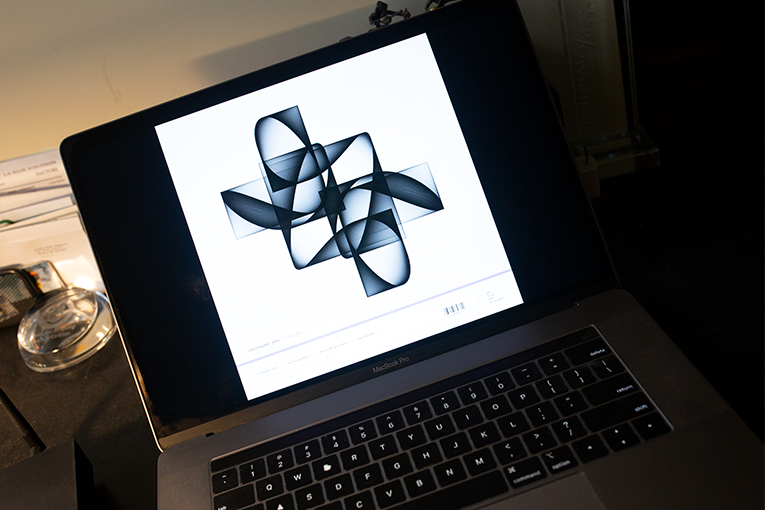 How the prerecorded sections work is a complicated concept, and I can’t do better than simply quote the album’s notes to explain how they fit together:

Q1 and Q2 both begin at the same starting pitch of A=442Hz and build outward using simple just intervals such as thirds (5:4) and fifths (3:2). Although each quartet steps forward using only the most basic and consonant of means, microtonal pitch discrepancies eventually begin to accrue. After a minute or so, Q1 has ascended by precisely one ragisma (0.396 cents); slightly later, Q2 completes its descent of one ragisma. The quartets continue spiraling in this way, each time forging a different melodic path of thirds and fifths, invariably arriving one ragisma higher (Q1) or lower (Q2). As these infinitesimal discrepancies become more and more perceptible, the listener is led into increasingly exotic harmonic terrain.

The result is a shimmering flow that slowly shifts, creating both delightful and somewhat sour intersections as the intervals change. Increasing the effect—which strikes me as similar to hearing a Buddhist practitioner chanting a mantra—is the spatial presentation, which producer Joseph Branciforte tuned to each performance.

We began by experimenting with a fairly exhaustive set of panning arrangements for Q1 and Q2. As an example, one version might have Q1 panned to the left side of the stereo field and Q2 providing its mirror image on the right side of the stereo field. A second version might maintain the symmetrical relationships, but change the order of the instruments around the center axis, where a third version might try a non-symmetrical arrangement. In all, we printed about eight or 10 different panning schemes and then listened back to each one to determine which one produced the most compelling listening experience. Given the minute differences in tuning between the quartets, the spatializations often produced radically different effects, with audible beating patterns and other psychoacoustic phenomena emerging or disappearing based on the left/right positions of the instruments in the stereo field.

For the Q1/Q2/Q3 version, this process was extended to include the addition of a third quartet, which gave us even more spatial permutations to explore. In the end, we decided on final mix versions that most convincingly reinforced the compositional structure of the piece.

It may well be the ultimate intersection of art and math, and both 19-minute performances revealed new details each time I listened. Also of interest was a third variation that is only available on the digital versions of Rag’sma; it features what Branciforte calls “local snapshots” of the two quartets from the Q1/Q2 performance so listeners can gain perspective on the process. 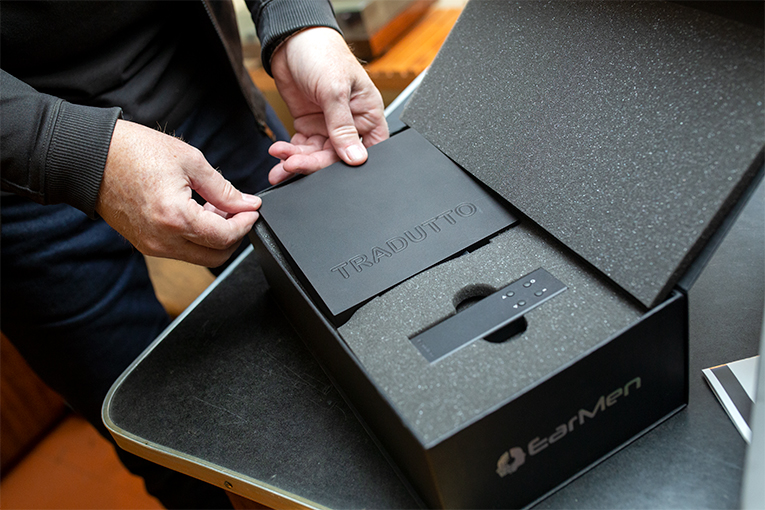 After getting acquainted with the music directly from the 24-bit/96kHz WAV files on my laptop via an AudioQuest Dragonfly Red DAC and HiFiMan HE400se headphones, I decided to move to my standard listening rig, supplemented by the new EarMen Tradutto DAC ($799, all prices in USD).

The Tradutto—a sleek, matte-black aluminum box measuring 1.2″H × 5.9″W × 5.9″D—is a fully balanced DAC and high-definition Bluetooth receiver, and EarMen’s first entry in a new desktop series of products. EarMen’s founder, Milomir Trosic, said the Tradutto is the result of partnerships with leading audio suppliers, including Apple, ESS, and Qualcomm, which enabled the company to access the latest models of integrated circuits. 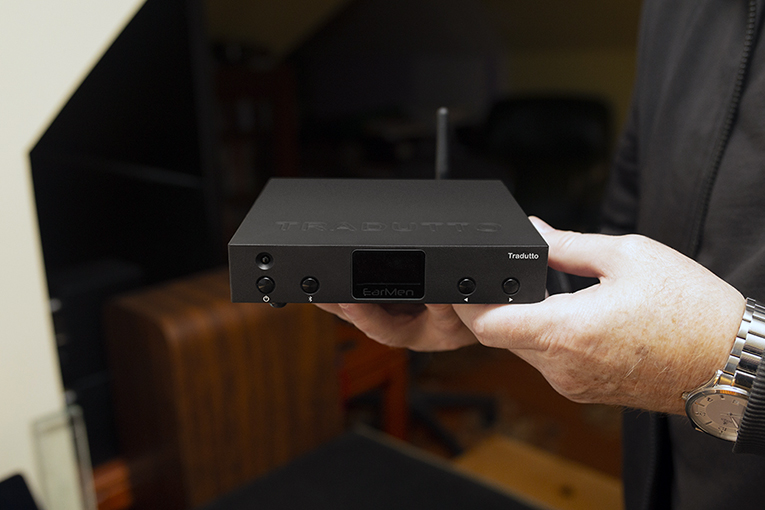 “After the great success of our EarMen Sparrow DAC-headphone amp and TR-Amp, we decided to expand the product line with high-quality desktop lifestyle products,” said Trosic, who also founded Auris Audio, the design-forward analog and digital hi-fi manufacturer.

He said the Tradutto is aimed to fill a niche just below DACs in the high-end category.

“In addition to the Tradutto DAC,” said Trosic, “EarMen has developed and started production of the Staccato streamer in the same form factor, as well as fully balanced desktop amplifiers.” 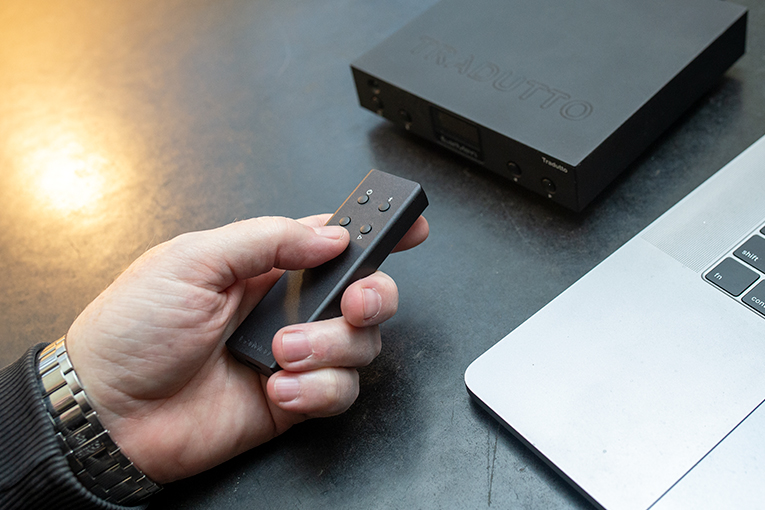 Common among all these products is perhaps the most gorgeous remote control I’ve ever encountered. Made from a solid block of aluminum, the remote feels beautiful in your hand and doesn’t require batteries; it is rechargeable via USB.

That same design aesthetic is carried throughout the Tradutto itself. The front panel has small, round pushbuttons for power, Bluetooth, and input selection. On the back are USB Type-B, optical TosLink, and coaxial RCA digital inputs; a connector for a short Bluetooth antenna; a pair of RCA outputs; and a balanced 4.4mm output. 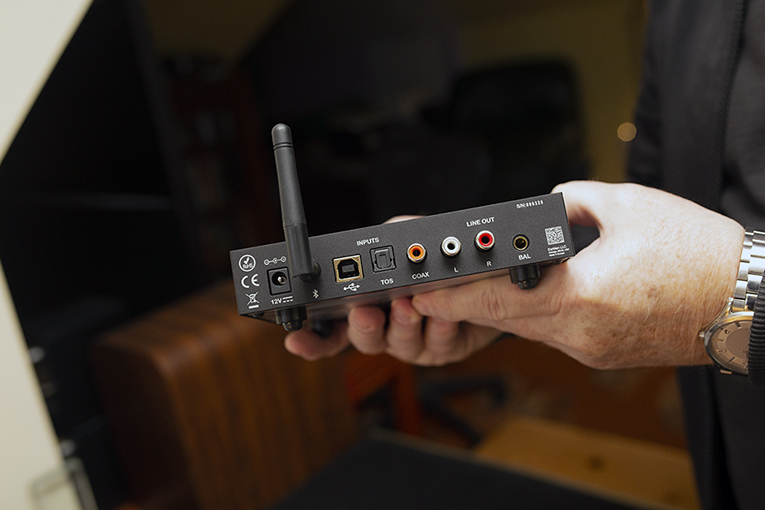 The ESS DAC chip inside is an ES9038K2M model, which can process digital files up to 32/768 PCM or DSD512, though the digital inputs will limit the file types and resolutions the chip can actually receive. The MQA decoder is on an XMOS 16-core XU216 chip.

Pairing the Tradutto to my MacBook Pro was quick and simple, and I was pleased with the results that flowed through my NAD D 3045 integrated amplifier and Q Acoustics 3050i floorstanding speakers. Switching to the braided USB cable that came with the Tradutto, I began streaming Rag’sma directly from my laptop and settled in to immerse myself in Otto’s soothing composition and the shifting audio perspectives.

During the first few minutes of the three-quartet version, the overtones began reverberating palpably, an experience akin to hearing a large pipe organ at full throttle. With my room filled with music, I flashed back to an illustrative lesson I once received in the physics of sound from the avant-garde guitarist and composer Tim Brady. Sitting in his home studio in Montreal, Brady showed me how minute variations in timing allowed him to create wild, Hendrix-level feedback with only a small amplifier. Layered strings have a direct correlation to volume.

While the Q1/Q2 variation also reached some spectacularly intense peaks, the dominant feeling was more akin to experiencing the breathing of a large animal; it expressed an organic-sounding presence that throbbed like the engine of a ship churning through heavy seas. 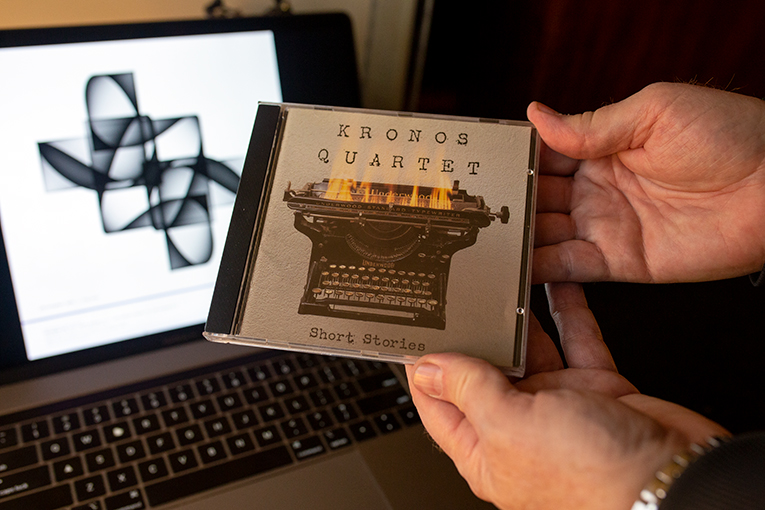 One interesting effect of listening to Rag’sma was that it tended to leave me in a highly contemplative mood, not wanting to jump up and throw on another recording. Despite that, I felt I needed to hear something with a very different soundstage, yet musically related. My answer was a CD I hadn’t played in a number of years: the 1993 Kronos Quartet recording Short Stories (Elektra Nonesuch Records E2 79310). The piece I selected was John Zorn’s 1988 composition “Cat o’ Nine Tails (Tex Avery Directs the Marquis de Sade).” Commissioned specifically for the popular string quartet, Zorn’s composition couldn’t be less like Otto’s music; it begins with a cacophonous flurry, and, over the course of more than 12 minutes, it swings between sweet harmonic blends and violent bow thrashes. It’s no wonder that Zorn namechecked Avery, the masterful animation director behind Bugs Bunny and other classic cartoons, in the track’s title.

With Short Stories loaded on the NAD C 538 CD player I use as a disc transport and an AudioQuest Forest coax cable connected to the Tradutto, I cued up the track and prepared myself for the zany mayhem of vintage Zorn. With the volume of my amplifier set at a medium-loud level for my room, the music emerged with great clarity from my speakers. Each member of the quartet sounded well defined and positioned. From the manic swirls in the upper register to the dark, woody percussion of cellist Joan Jeanrenaud striking her instrument, everything was rendered in crisp detail. 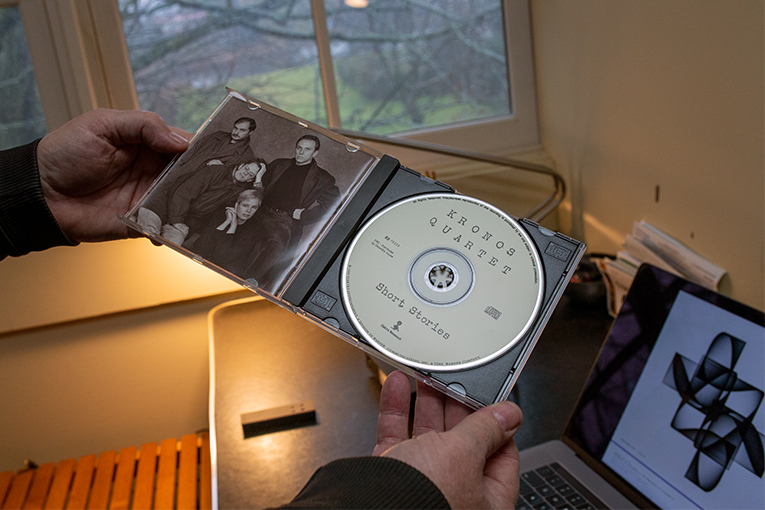 Both Zorn and Otto demand that listeners adjust their expectations in terms of what constitutes contemporary composition, just as they demanded exceptional technique from the members of the Kronos and JACK string quartets on these recordings. In both cases, the music also benefited from engineers who were capable of creating soundstages that could showcase all the subtleties of stringed acoustic instruments. These are recordings that reward close listening, and the EarMen Tradutto rendered the complex details with precision and clarity. In fact, you might compare the experience to reading an arcane mathematical equation chalked on a blackboard with elegant calligraphy.