Note: for the full suite of measurements for the Music Hall a15.3 from the SoundStage! Audio Electronics Lab, click this link.

In opera, musical theater, the blues, country music, and, of course, in pop music, the human voice is an essential instrument. The skilled application of breath, glottal manipulation, timbre, tone, and other singing techniques can touch our hearts, draw a tear, raise a smile. It’s straight from human throat to human ear; there is no more elemental communication.

Strangely, in jazz—given the number of iconic singers any of us could name—vocalists have a hard time getting their due. Sure, jazz singers like Ella Fitzgerald, Cleo Laine, and Cassandra Wilson have legions of fans and sell many recordings, but a lingering shadow of the “chick singer” label hangs over them—and acclaimed male jazz singers are a rare breed. And, if they decide to enrich their craft by attending a post-secondary jazz program—standard practice for jazz musicians these days—vocalists often find themselves marginalized. 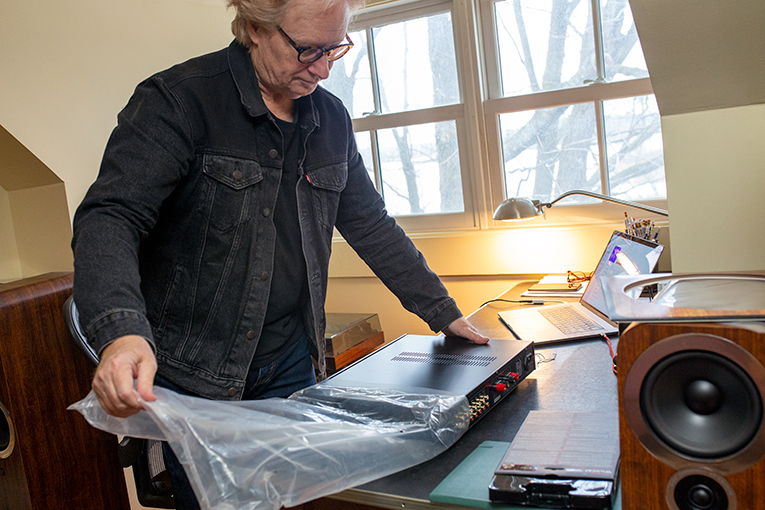 In a recent issue of DownBeat magazine, veteran singer and jazz educator Dominique Eade addressed the problem head on: “I sometimes encounter jazz educators who are uncertain how to incorporate singers into their programs without relying solely on vocal jazz groups or the conventions of more traditional settings for a solo vocalist.”

One contemporary singer who has carved out a non-traditional role is Theo Bleckmann. A 54-year-old native of Germany who has lived in New York City since 1989, Bleckmann is a ceaselessly compelling performer and composer with a style that touches on cabaret, contemporary classical music, pop, and jazz. In the latter vein, he established his credentials early on by studying with bebop veteran Sheila Jordan and caught jazz journalists’ ears with early recordings with guitarist Ben Monder and percussionist/composer John Hollenbeck.

It was on Hollenbeck’s 2001 album No Images (CRI 2002) that I first heard Bleckmann, and his voice was distinctive. He’s technically a baritone with an extended male-alto range, but it’s a highly flexible voice; one I associate more with the upper range and the feathery edge to his lower range. I discovered that Hollenbeck and Bleckmann—who have been frequent collaborators over the ensuing two decades—had a mutual fascination with makeshift percussion and noise-making toys, but it wasn’t until I saw them perform as a duo in 2004 that I fully appreciated the multitude of ways that Bleckmann can manipulate his voice. At the Guelph Jazz Festival that year, Hollenbeck and Bleckmann performed wholly uncategorizable music, with the vocalist turning onstage to create a Doppler effect and projecting his voice through a tiny, red-plastic megaphone.

These days, Bleckmann needs no props or extra-musical techniques to create stunningly original music. He has inhabited the role of gangster Dutch Schultz in an opera, reinterpreted the music of Kate Bush, and performed with a wide range of artists, from Laurie Anderson to John Zorn. Of course, he’s also recorded Solos for Voice and Toys in a Swiss monastery; his sense of the absurd and his love of theater are never far from the surface.

Increasingly, I have turned toward his unvarnished performances because there is something in the humanity of his voice that is calming and reassuring. Even when the lyrics express tragedy, the life force that comes through in his vocalizing seems uplifting. You might call it an ideal voice for these times. 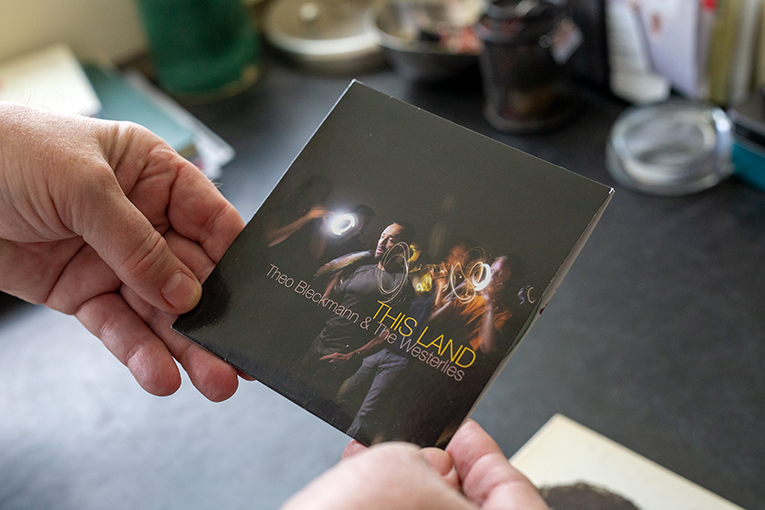 Like many of his peers, Bleckmann has been focused on “these times” during the tumultuous Trump era and its related turmoil. On This Land (CD, Westerlies Records 002), he joins New York horn quartet The Westerlies for a program of music with a social conscience. While there is some electronic vocal manipulation on the album, he sings mostly with his pure voice, which rings with truth at every turn of phrase, whether the lyrics are Joni Mitchell’s, Bertolt Brecht’s, or his own.

A powerful voice like Bleckmann’s deserves to be heard as directly as possible, so it seems like a great match for the Music Hall a15.3 integrated amplifier—a minimalist’s dream machine. Rated at 50Wpc (into 8 ohms) with a signal-to-noise ratio of >90dB, the a15.3 is billed as “the perfect choice for someone looking to assemble their first high-end audio system.” At $549 (all prices are in USD), there’s no question the amplifier is a bargain—a reflection of owner Roy Hall’s frank statement that the company’s electronics, with the exception of its turntables, are manufactured in China. Like Roku with their smart TV manufacturing partner TCL, Music Hall has leveraged the Chinese component of its supply chain to carve out a lower-priced niche in its market. 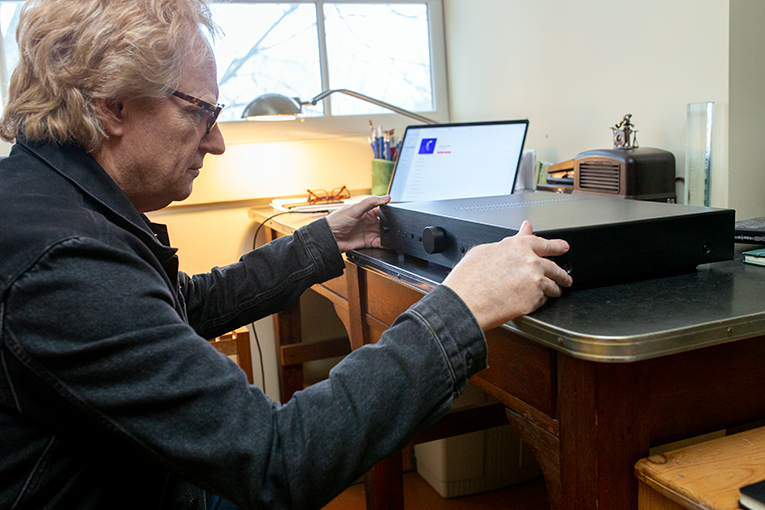 Visually, the a15.3 is minimalism exemplified. With a low (3.1″ high) profile, large central dial for volume, and eight small, linearly arranged pushbuttons, the amplifier will sit unpretentiously in any hi-fi array, its two soft, blue lights all but apologizing for intruding. I like the way Music Hall straightforwardly announces the functionality of its input buttons: labeled one, two, three, and so on, in an unfussy lowercase font. That said, legibility is a major issue, due to the company’s choice of a light-gold color for the labels on the black, brushed-aluminum faceplate.

Unlike my regular NAD D 3045 integrated amp, the a15.3 has no DAC or Bluetooth receiver, but it does have five line-level, single-ended RCA inputs, as well as another set of left and right RCA inputs for its built-in moving-magnet phono stage. Even the product manual is written in simple, non-hyperbolic language. 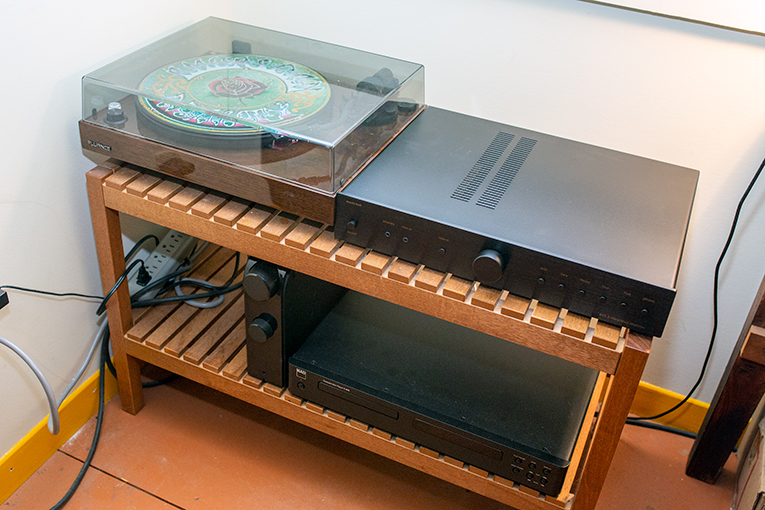 Just over 45 minutes long, the album balances politically charged (somewhat era-adjusted) lyrics with four sprightly instrumental interpretations of Woody Guthrie songs: “Two Good Men,” “Tear the Fascists Down,” “The Jolly Banker,” and “I Ain’t Got No Home in This World Anymore.” While there’s a slightly surrealistic juxtaposition between these jaunty instrumentals and the solemnity of Brecht’s “Das Bitten der Kinder”—which Bleckmann recites in English and sings in German—what ties them together is the presence of breath. The strategic use of breath is paramount in everything Bleckmann sings, and its clear presence between some of the phrases played by the quartet serves to draw you into their performances.

What also binds Bleckmann, born in what was then known as West Germany, and The Westerlies—trumpeters Riley Mulherkar and Chloe Rowlands, and trombonists Andy Clausen and Willem de Koch, all childhood friends from Seattle—is the precision they embrace in their phrasing. There are no sloppy notes, nothing that seems half-considered, and yet the unit performs with the abandon of a free jazz group. 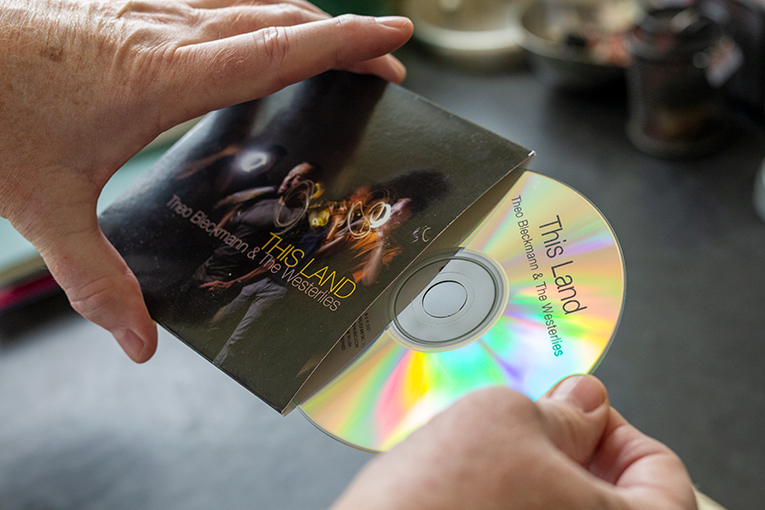 The uncredited arrangements also exude precision, particularly in the way the slightly discordant harmony on Phil Kline’s “Thoughts and Prayers” creates tension, and how the heraldic-sounding horn chorus on “Look for the Union Label” falters and slows like broken machinery in a rusting industrial town.

Clausen’s “Grandmar” incorporates Bleckmann’s voice as a fifth horn in a triumphant showcase with multiple parts, and employs what sounds like an early American fiddle tune as a nagging overtone. It makes me want to dive much deeper into Clausen’s work as a composer.

Bleckmann’s showpiece is his own “Another Holiday,” which is ripe with cinematic imagery and filled with the mystery of what the narrator has yet to reveal to his family about the romantic partner he wants to bring into the fold. The song has all the elements of a short story, and the singer delivers it with beauty, heartache, and dread.

This Land is a triumph of both design and delivery, and Joseph Branciforte’s work as engineer and mixer is exceptional. 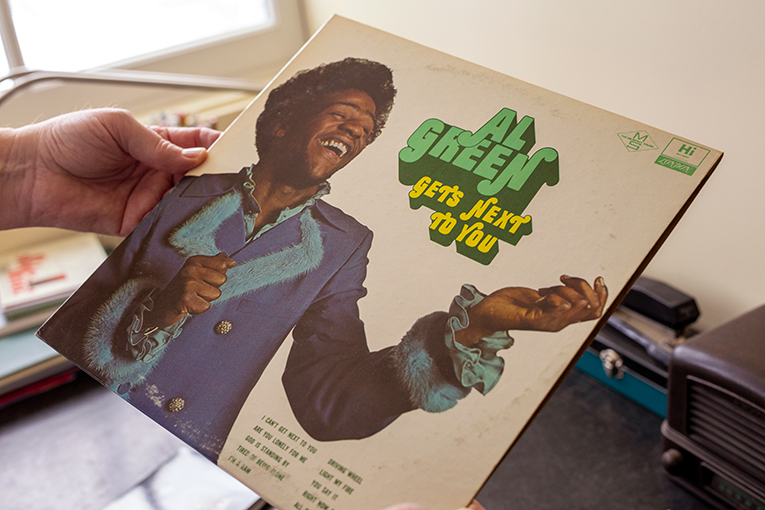 The combination of Bleckmann’s rangy voice, the tight-knit horn unit, and an uncluttered soundstage on this CD set the bar for a suitable vinyl album to test the Music Hall’s phono stage. After cycling through a few options in my collection, I landed on Al Green’s 1971 masterpiece, Al Green Gets Next to You (LP, Hi Records/London Records SHL 32062). Produced by Willie Mitchell at Royal Studios in Memphis, the album has horn arrangements that are as tight and precise as those of The Westerlies on This Land and, while it features a rhythm section and electric guitar, it is Green’s singular voice and the horns that command your attention. Like Bleckmann, Green can go low and gritty or fly into a high tenor range—the ideal range for someone who has made his living as both an R&B sex symbol and an ordained minister.

I put my rarely played copy of the album on the platter of my Fluance RT83 turntable and used my AudioQuest Wildcat cables to connect to the a15.3’s phono inputs. 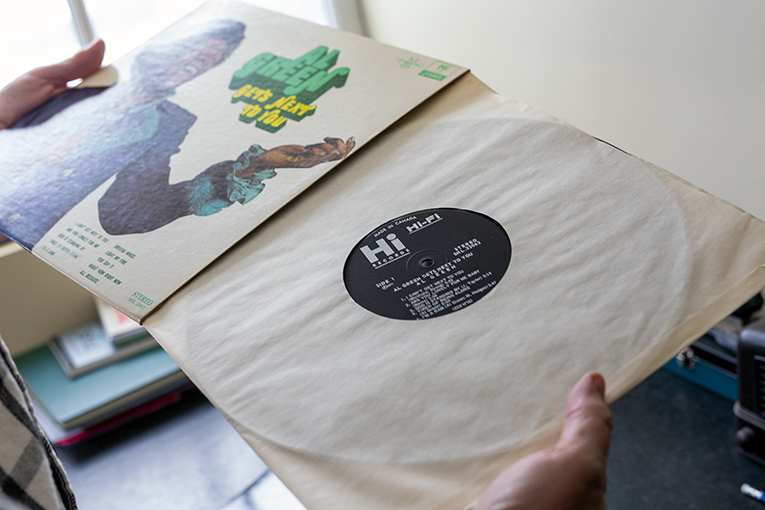 With the Music Hall amp set at just slightly less than half of its gain range, Mitchell’s production sounded as present and dynamic as any contemporary recording. Green’s voice had both power and warmth, and small highlights—a drumstick strike on the dome of a ride cymbal, or a baritone saxophone bleat—jumped out of the mix.

At lower volume, Green’s gently seductive crooning on his hit song “Tired of Being Alone” still came across with a mixture of authority and vulnerability, and when he soared into his signature falsetto cry it still delivered that frisson that helped him sell some 20 million albums and win 11 Grammys.

After a couple of weeks playing the Bleckmann CD and reacquainting myself with the Green LP, I felt satisfied the a15.3 could meet the needs of anyone seeking a sub-$1000 amplifier to supply unvarnished sound at normal listening levels.

But there was a niggling question in my head: Could it handle something challenging at top volume? I didn’t spend much time thinking about what could present that challenge; I just knew I wanted to hear the Stones. Loud. I pulled out my weathered copy of Sticky Fingers (LP, Rolling Stones Records COC 59100), the zipper on the Andy Warhol–designed cover long since removed to avoid scuffing any adjacent LP. I dropped the Fluance tonearm on the lead-in groove of side 1, cranked the volume knob on the Music Hall, and stood back.

Keith Richards’s choppy opening chords of “Brown Sugar” filled my room, but just as evident behind his and Mick Taylor’s electric rigs was what Richards revealed in his autobiography as his secret rhythm weapon. In the late ’60s, Richards stumbled upon the idea of close-miking an acoustic guitar and feeding the signal into a cheap cassette tape recorder, overloading the recording head well past the point of distortion. The result was clearly acoustic at its roots, but with a grungy edge. In fact, it’s safe to say that grunge began right there; Kurt Cobain’s cheap Fender electric sounded like nothing more than Richards’s homemade fuzz box. 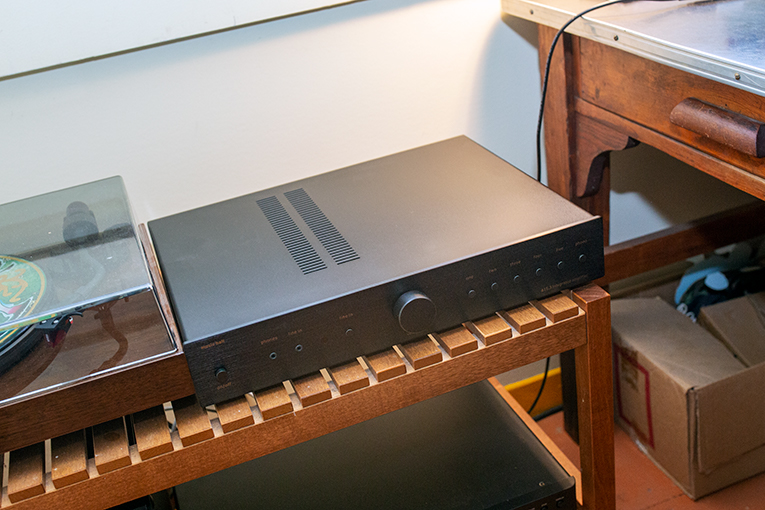 When the Stones went into the studio in that era, the engineer would lay in Richards’s noisy track as the rhythm bed, and the band would build from there.

That technique was laid bare by the Music Hall in full voice—strongly present in the right channel under the raging electric guitars, Bill Wyman’s weighty bass, and Charlie Watts’s taut drums.

To be sure, the Music Hall amp didn’t belt out “Brown Sugar” the way I remembered my big 125Wpc Sony STR-7800SD receiver roaring through my Bose 901 speakers, but for anyone who wants unadorned sound and enough power for the average-sized listening space, the a15.3 offers plenty to enjoy at a great price.

Note: for the full suite of measurements for the Music Hall a15.3 from the SoundStage! Audio Electronics Lab, click this link.